Home » Lifestyle » Inside the remote camp of a nomadic Mongolian tribe

Inside the remote camp of a nomadic Mongolian tribe

Sniffing snuff and drinking horse milk: Inside the remote camp of a nomadic Mongolian tribe that still lives as its ancestors did, roaming a primaeval landscape… and welcoming strangers

If you’re in the market for an unforgettable eye-opening experience, I can highly recommend randomly meeting a nomadic family in Mongolia and getting a taste of their ancient way of life, which has scarcely changed for thousands of years.

I had an encounter with these hardy people last summer while I was on a trip driving across a roadless landscape from the Mongolian capital of Ulaanbaatar to the Gobi Desert. We had no GPS and employed knowledgeable locals to navigate the vast, primaeval terrain.

Nomads and semi-nomads make up about a third of the Mongolian population. These traditionalists are herders, typically keeping around 1,000 animals to survive, and they live in movable tents called ‘gers’, which stay cool during the stifling summers and warm in the freezing winters, when temperatures can plummet to -40C. 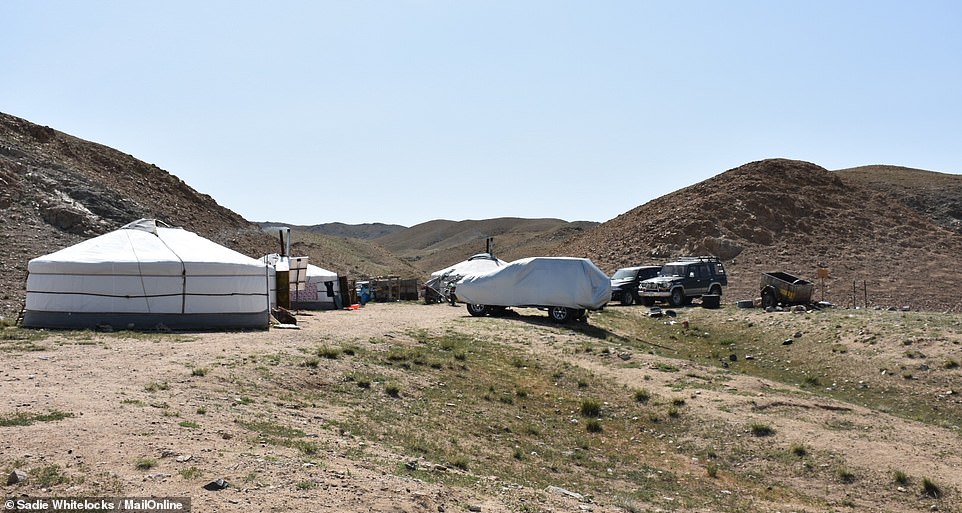 Steppe to it: MailOnline Travel’s Sadie Whitelocks journeyed from the Mongolian capital of Ulaanbaatar to the Gobi Desert. She stopped at the above encampment during the bumpy drive 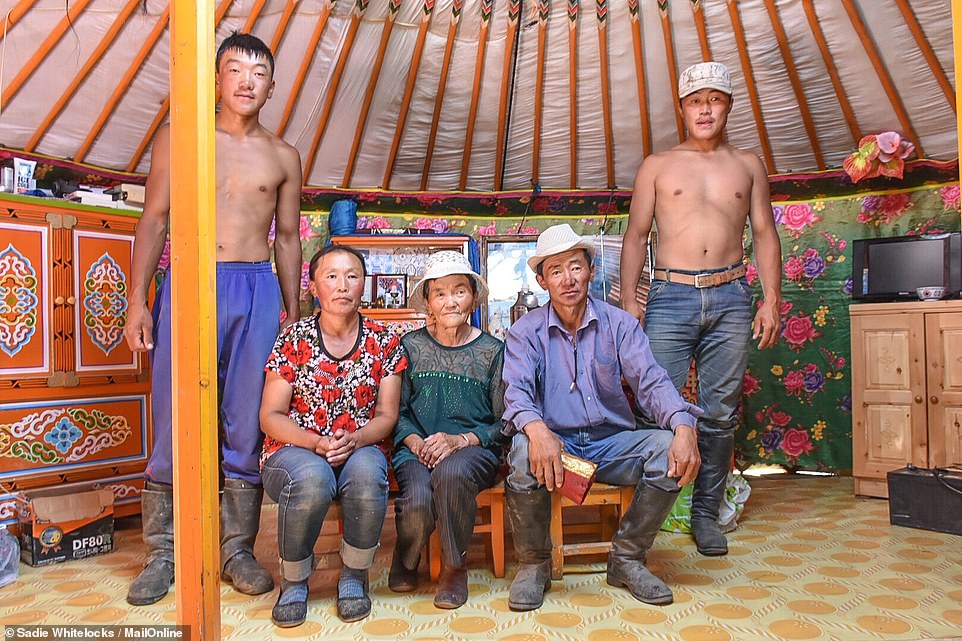 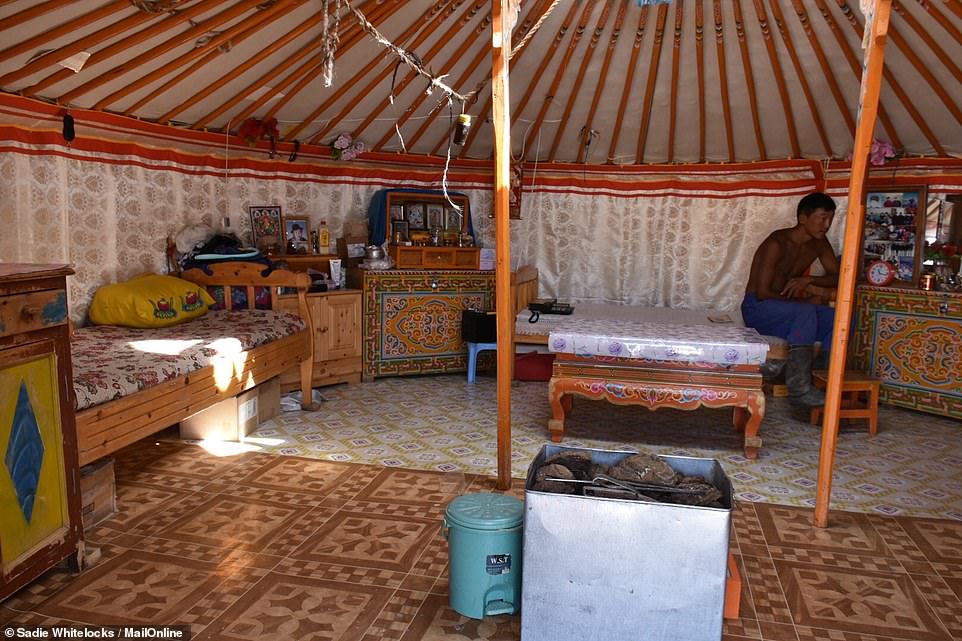 A peek inside one of the gers where the Mongolian family sleep, complete with ornate furniture and a wood burner

Nowadays the nomads do benefit from a few mod cons, such as 4×4 vehicles, solar panels for energy and televisions, but for the most part their life is tied to living off the land.

Coming into contact with the nomads was a mixture of luck and local knowledge. We were making the long drive from the small town of Arvaikheer to the Khogno Khan Uul Nature Reserve with the bumpy off-roading journey set to take some nine hours.

In a bid to break up the journey our local guide, Odgerel – who cheerily told us to call her ‘Odka like vodka’ – suggested stopping to have tea with some nomads if we happened to spot a camp in the vast wilderness.

We’d been bumping along in a dust-covered people carrier for some five hours, with meek air conditioning seeping through the stuffiness. We’d wheeled over seemingly never-ending undulating hills, watched only by camels, goats and horses.

As luck would have it, just when several of us voiced the need for a toilet break, we wheeled around a corner close to a stream and a trio of tents came into view. Odka excitedly told us to stay put in our cars as she popped in to speak to the family living there – and amazingly they welcomed us in.

Before stepping into the camp, which featured two swanky-looking 4x4s parked outside and some motorbikes, we were introduced to 74-year-old grandma Dariimaa. It turned out she lived at the camp with her son, daughter-in-law and two grandsons.

In true Mongolian style, with hospitality being at the centre of things, we were welcomed into the family’s main ger for a rest.

‘You must have come a long way to find us!’ Dariimaa said in her native tongue, followed by a toothless laugh, which made us all laugh too.

Odka asked the pensioner a few questions and we were told that the nomadic family had around 1,000 livestock and made their living by selling horses and camels occasionally and making products from their milk. 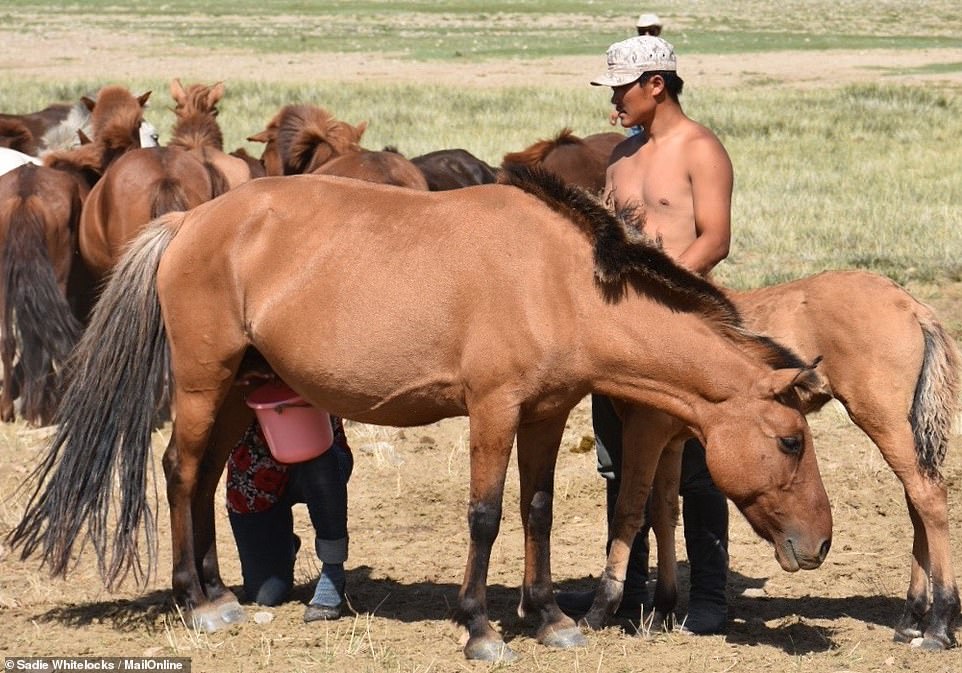 The Mongolian family showed Sadie how they collect horse milk. They milk the mares twice a day 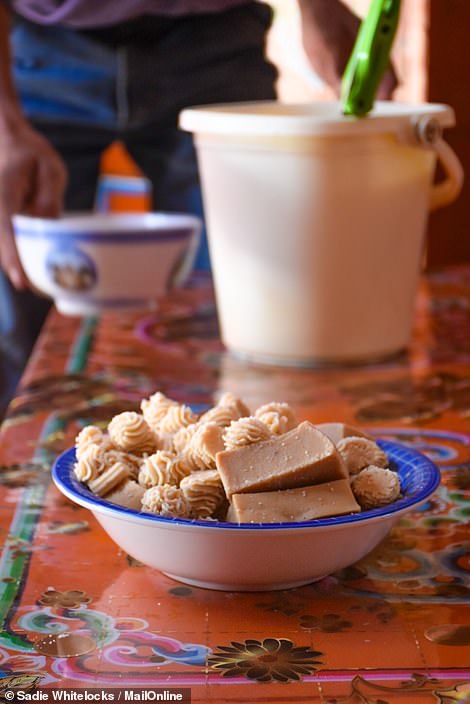 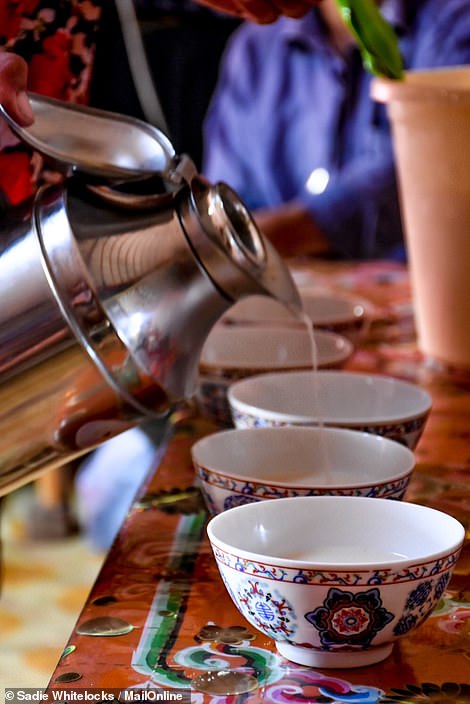 Dariimaa’s son, Tumubaatar, who was the spitting image of her, proudly showed us around the colourful abode.

Over the centuries, the Mongolian ger hasn’t changed dramatically, with a stove in the middle of the circular structure and a roof vent. The movable shelters are generally built from wood and clad with felt for insulation. Nowadays, many are also kitted out with plastic coverings to help with water run-off.

During my visit to Mongolia temperatures were in the mid-to-high 20s. The door of the ger was open for ventilation as was the central roof vent and there was a cool breeze blowing.

Looking around the ger, it felt very homely with photos of the family stuck to a mirror atop an intricately painted wooden dresser.

There were dozens of little ornaments dotted around, including some porcelain elephants and one of Santa Claus.

Bunches of plastic flowers hanging from the ceiling rafters added to the dwelling’s conviviality.

Within minutes we were offered some traditional salted tea. Known as suutei tsai, the beverage contains a blend of salt, milk, butter, millet, green tea and sugar.

I found the hot drink had quite an unusual flavour, being more on the savoury side than sweet and it left an oily film in my mouth. 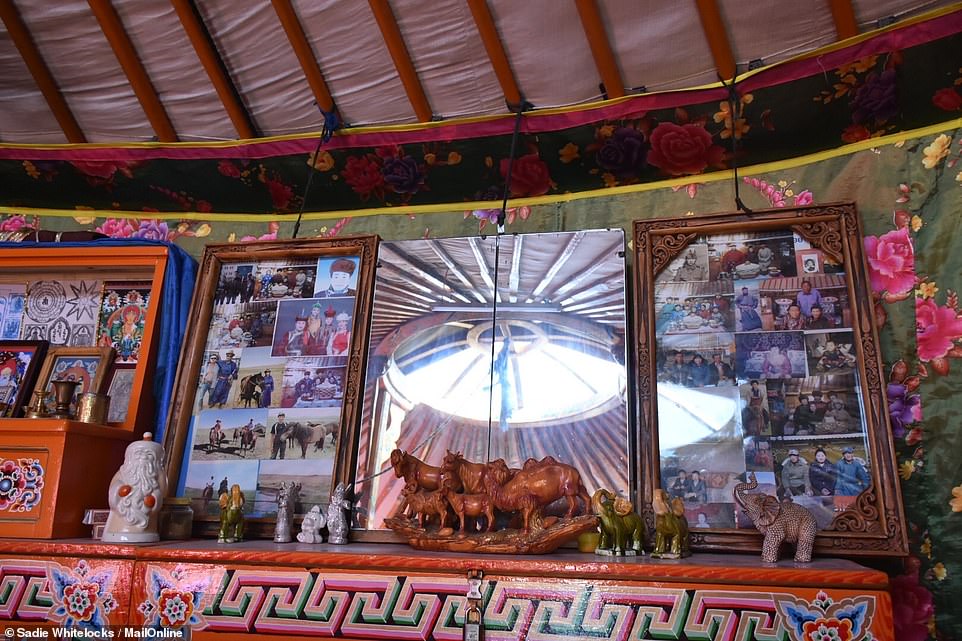 Looking around the ger, Sadie said it felt very homely with photos of the family stuck to a mirror atop an intricately painted wooden dresser. There were dozens of ornaments dotted around, including some porcelain elephants and one of Santa Claus 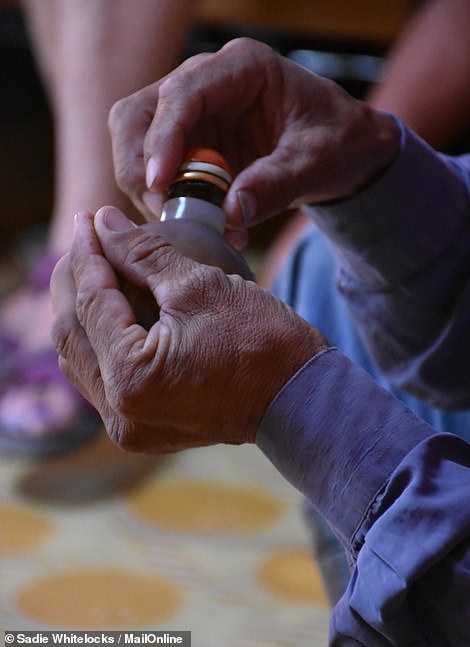 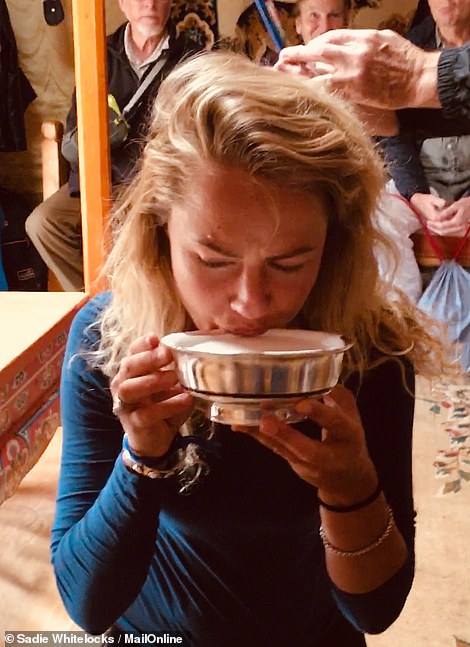 Tumubaatar offered Sadie and her group snuff (left). She found the mare’s milk a little hard to stomach (right) 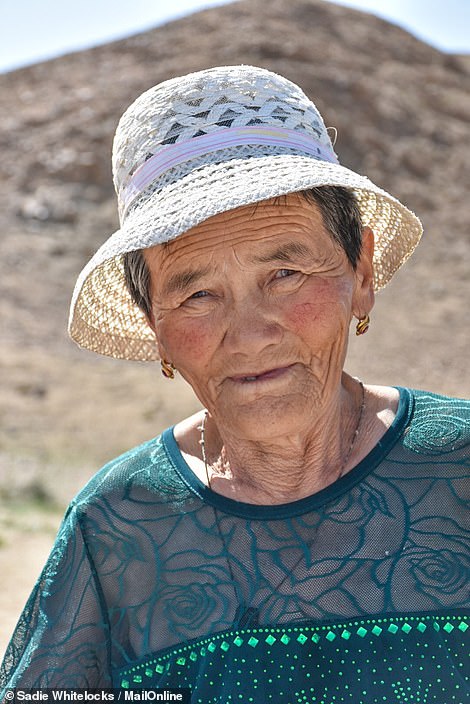 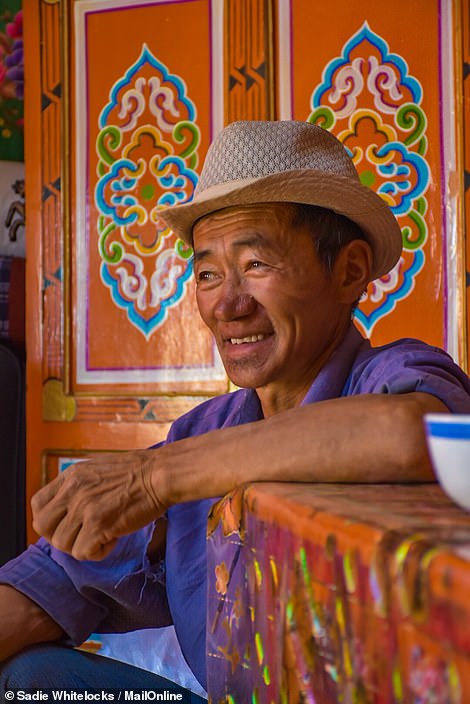 Grandma Dariimaa ventured out to greet Sadie and her travelling party (left), while her son Tumubaatar showed everyone around the ger (right)

To accompany the tea, Tumubaatar offered us some chunks of dried milk curd.

I found it a little hard to stomach this traditional snack, known as aaruul. It had a musty Parmesan flavour mixed with the aromas of a farmyard, and I discreetly put the remainder of the dairy nugget into my pocket.

Tumubaatar’s wife, Ulziikhutag, got increasingly excited by the prospect of having visitors and she returned from her kitchen ger with a plate of buttermilk. This is the congealed film that is skimmed off a boiling cauldron of mixed milk, from goat, sheep and camel.

Unlike the dried milk curd, this gooey pancake-like dish was kinder on the palate, with a creamy almost custard-like taste.

But the nice taste was soon disrupted by the next offering put before me – fermented mare’s milk, or airag as it is locally known.

The thick liquid tasted slightly like yoghurt past its sell-by date, with a sharp flavour and slight fizz.

Asked how they get the mare’s milk, Ulziikhutag excitedly led us outside with one of her sons and took us to her pack of horses, where she gave us a milking demonstration. 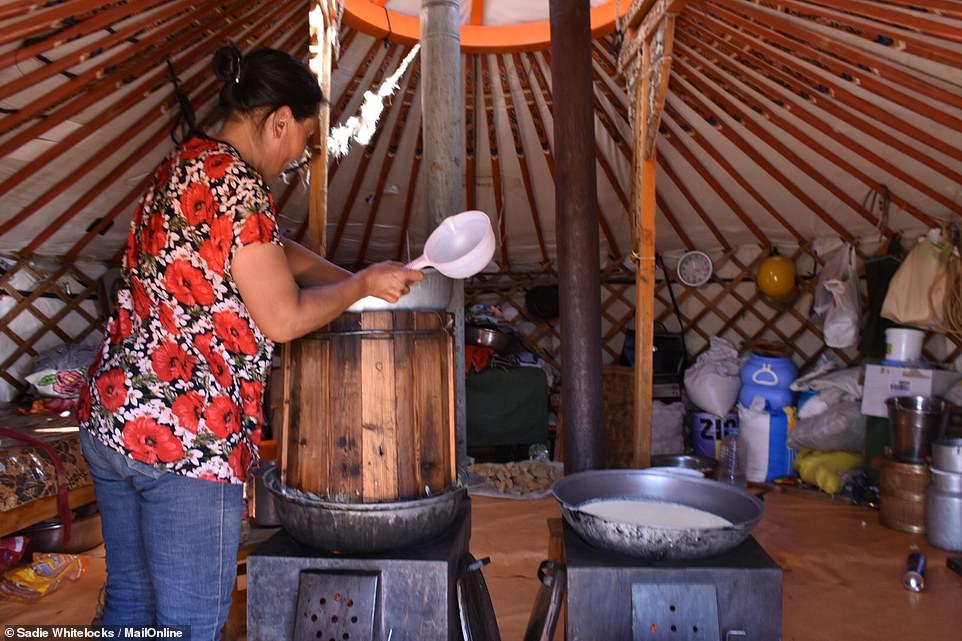 Ulziikhutag prepares some buttermilk, which is the congealed film skimmed off a boiling cauldron of mixed milk, from goats, sheep and camel 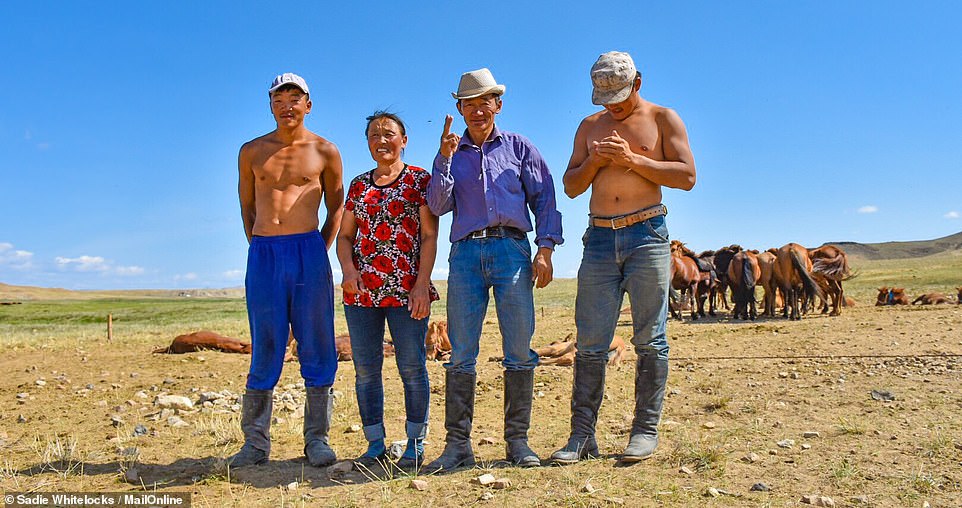 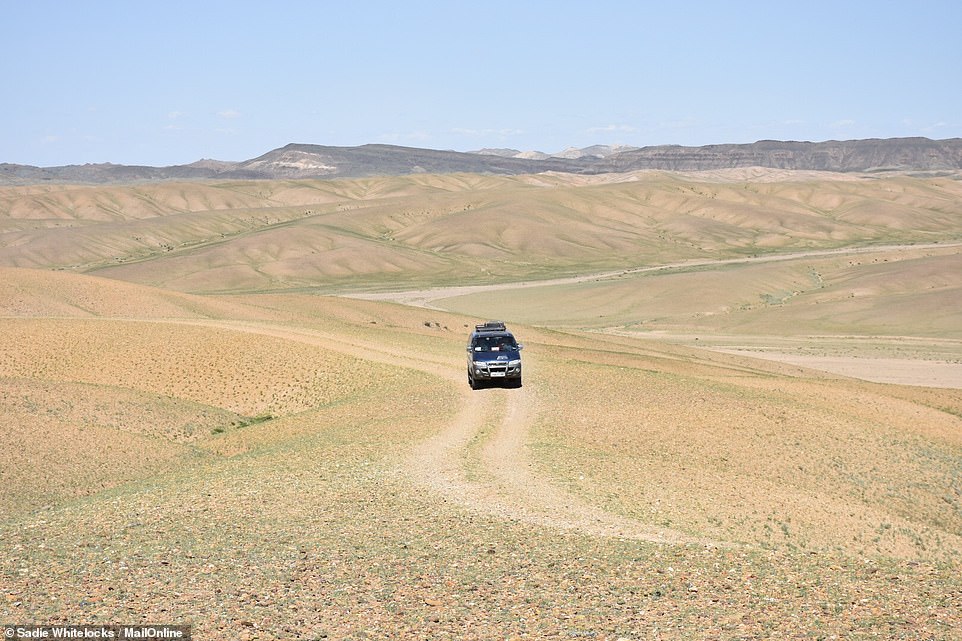 She made it look exceedingly easy but after my Mongolian horse ride earlier in the trip had turned into a galloping fiasco, I didn’t fancy my chances at grabbing a teat.

We returned to the main ger where, as a final favour, Tumubaatar offered us snuff.

I sprinkled a little bit of the dusty looking powder from the heavy glass vessel on to the back of my hand and proceeded to give it a sniff.

Its purpose is to make you feel relaxed, but instead it triggered a sneezing fit. I felt like I’d inhaled pepper.

After taking another gulp of salted tea to help clear my nostrils we bid the family goodbye. There was still another four hours of driving to go to our next stop.

Andrea, one of the women in our touring party, noted: ‘If someone came to my door in London I’d never welcome them in for tea.’

I guess that’s one of the extraordinary things about Mongolia that will stay with me.

The kindness of strangers in a foreign land, speaking the same language through smiles, shared snacks and snuff.

The FCO currently advises British nationals against all but essential international travel.