International travellers without COVID vaccination to be forced into quarantine

Travellers who refuse to be vaccinated against coronavirus will be forced into quarantine at their own expense before being allowed into the country, under plans being considered by the Morrison government.

There is growing anticipation early successful trials of COVID-19 vaccines could lead to the widespread resumption of international travels in the next 12 months following its rollout, which is likely to begin mid next year. 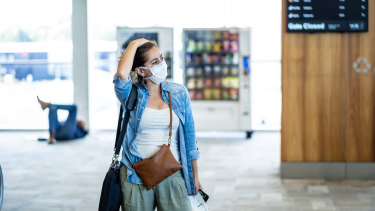 Unvaccinated travellers will be forced to quarantine under the new plan.Credit:iStock

Mr Morrison said on Wednesday there were already systems in place around the world where many countries either vaccinate on the spot, or refuse entry to people if they have travelled to a high risk area for diseases such as yellow fever.

"We're obviously working through those issues now, but look where people have the choice of two weeks of quarantine or being vaccinated. I think that will be an incentive unless there's a genuine medical reason why," Mr Morrison told Jase & PJ on 101.1 KISS FM in Melbourne.

He said while there would be obvious exemptions for those travellers with genuine medical reasons for not being vaccinated, he said would be little tolerance for anti-vaxxers.

"We've got a lot of those issues to work through and so do all the other countries," he said.

The requirements will likely be based on the current immigration process regarding yellow fever, where any incoming traveller entering the country from an area where the disease is prevalent must show Border Force documentation that they have been vaccinated against it.

If trials are successful it is expected the World Health Organisation will move to add COVID-19 to its list of diseases that require vaccination declarations.

Federal Health Minister Greg Hunt said on Tuesday that while there had yet to be any decisions made, he would expect people coming to Australia while COVID-19 was a significant disease would either be vaccinated or they would need to isolate.

"It's not a formal decision that we've taken because it's still not at that time. At this stage, everybody who comes has to quarantine," Mr Hunt said.

"The likely course of events during 2021 is if somebody comes to Australia and a vaccine is widely available, either they'll be vaccinated with verification or they'll have to quarantine."

Australia shut down its international borders early in the pandemic and required those returning to quarantine.

Initially state and territory governments picked up the bill for mandatory hotel quarantine but in July they moved to a user-pays system which put the costs on to returning travellers.

Qantas chief executive officer Alan Joyce warned earlier this week all passengers would need to be vaccinated against coronavirus once it became available before the would be permitted to fly on his airline.

"We will ask people to have a vaccination before they can get on the aircraft… for international visitors coming out and people leaving the country we think that's a necessity," Mr Joyce said.