IOC president Thomas Bach has postponed a trip to Japan, site of the Olympics in a little over two months, because of a continued surge in coronavirus cases that has caused a state of emergency to be extended.

Bach had planned to visit Hiroshima next week, meeting up with the torch relays before possibly traveling to Tokyo, which, like other parts of the country, is under a state of emergency that will continue until May 31. It originally was to have ended on Tuesday. 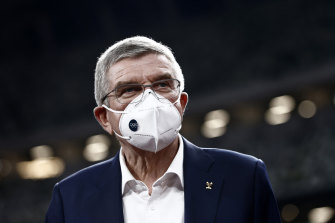 IOC president Thomas Bach has postponed a trip to Tokyo due to a surge in cases of COVID-19.Credit:AP

Bach will instead visit “as soon as possible,” the IOC said in a statement announcing cancellation of the trip.

The pandemic forced the 2020 Games to be postponed for a year and organisers are determined that they will take place even as people in Japan have lost enthusiasm for them. Recent polls show that anywhere from 60 to 80 per cent of people favor the cancellation or postponement of the Games. An online petition calling for cancellation gained 300,000 signatures in three days.

“Of course I would say I want the Olympics to happen, because I’m an athlete and that’s sort of what I’ve been waiting for my entire life,” Osaka, the world’s top female player who would compete for the Japanese team, said at the Italian Open, “but I think that there’s so much important stuff going on, and especially the past year.”

Williams’ reluctance is related to Japan’s decision to close its borders to people from 152 nations, including the United States. Entry would be denied “unless special exceptional circumstances are found.” Williams hinted that if her three-year-old daughter Olympia is not allowed into the country, she might skip the Games. The grand slam schedule is a factor as well.

Last week, the IOC announced that vaccine developers Pfizer and BioNTech would donate doses to inoculate athletes and officials ahead of the Games, with doses set to begin this month.

Roughly 11,000 people have died in Japan, a poor figure in Asia, and viral variants are spreading as vaccinations slowed last month. The country is running last among the 37 members of the Organization for Economic Cooperation and Development members, threatening the country’s economy.

“Japan’s 1.6 per cent rate of vaccination puts it on par with Myanmar, a failed state – not exactly a ringing endorsement of Tokyo’s shambolic rollout,” Jeff Kingston, head of Asia studies at Temple University’s local campus and a longtime resident of Tokyo, said in a recent Washington Post opinion piece. “This is an own goal of epic proportions.”