Jack Harlow wants to make sure people respect Lil Nas X. At the 2022 Grammy Awards, Lil Nas X and Harlow performed their collaboration “Industry Baby.” On the red carpet before the award show, Harlow was interviewed by Laverne Cox for Live From E!: Grammys. During the interview, Harlow credited Lil Nas X for “trailblazing a path” in hip-hop.

Lil Nas X and Harlow released the song “Industry Baby” in July 2021 as a single from Lil Nas X’s album Montero. The song reached No. 1 on the Billboard Hot 100 and was nominated for Best Melodic Rap Performance at the 2022 Grammy Awards.

On the red carpet at the 2022 Grammy Awards, Harlow spoke to Cox for Live From E!: Grammys about how he admires Lil Nas X.

“There’s been a lot of conversation about homosexuality and hip-hop,” Cox said. “Lil Nas X is obviously an openly gay hip-hop artist. You clearly are unbothered by all of that. What do you have to say to people out there who are bothered about gay folks and hip-hop?”

He continued, “Yeah, I mean, he’s trailblazing a path that, you know, it’s sad that it has to be trailblazed. But I think it’s amazing. He’s innovating the game—and it’s fresh, it’s powerful, and it’s necessary, so I love it.”

During his interview with Cox, Harlow also shared what it was like collaborating with Lil Nas X on “Industry Baby.”

“Now, Lil Nas X has said that you were the perfect person to collab with for ‘Industry Baby’ because you both had hit songs and people thought that would be the only one, you’d never have a hit again. How much of a flex is it that ‘Industry Baby’ has been such a huge success?” Cox asked Harlow.

“It’s a flex. It’s an amazing addition to my setlist. I’m grateful to him, you know?” Harlow said. “I’m performing with him tonight. It was a collaboration, but you know I owe him a lot for this moment. So, I love him for that.” 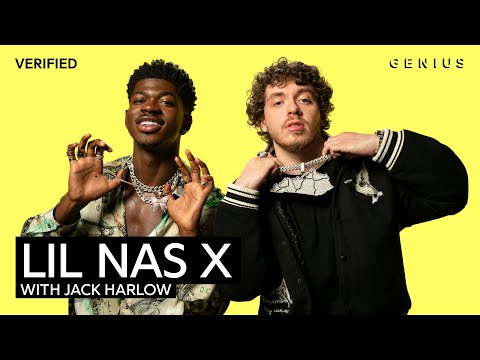 The two artists performed at the 2022 Grammy Awards

Speaking with Cox on the red carpet, Harlow teased the performance.

“My man set this up. He has so much in store I feel like it’s not my place to say anything about it,” Harlow told Cox. “Just make sure you watch it.”