Jamila Rowser and Robyn Smith embody Toni Morrison’s belief that, “if there’s a book that you want to read, but it hasn’t been written yet, then you must write it.” The award-winning writer-artist duo are creating the stories they want to see and read within comic books.

Their journey as a comics team first began about five years ago, when Rowser had an idea to create a mini comic inspired by her own wash day routine. After battling with self-doubt and eventually finishing the script with the help of J.A. Micheline, her editor, Rowser reached out to Smith on Twitter to bring her idea to full fruition.

Rather than pitching the mini comic idea to a publishing company, Rowser and Smith launched a Kickstarter campaign to raise money to self-publish the project. The Kickstarter began on April 03, 2018; in less than two days, they reached their $5,000 goal. By the end of the 30-day campaign, 720 backers from around the world pledged a total of $16,785. Wash Day, the 27-page slice-of-life comic that “pays tribute to the beauty and endurance of Black women and their hair,” was released later that year to critical acclaim.

“What big publisher run by straight old white men is going to want a comic book about a Black girl going through her wash day routine? They don’t even know what that is. So I was like, ‘I’ll just do it myself.’ And it did really well,” Rowser says about her first comic. “All of the stuff that I thought would hinder its success ended up making it successful, which is really affirming as to the types of stories I want to tell. People are thirsty for these kinds of stories, and the success of Wash Day showed that.” 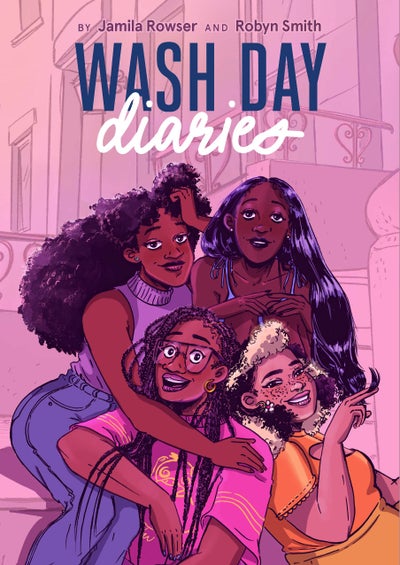 Rowser — a queer Black Puerto Rican and Dominican writer, editor and publisher who lives in Miami but proudly reps the Bronx — says she originally had no intention of expanding the mini comic, but when she and Smith were approached by Chronicle Books with the opportunity to turn Wash Day into a graphic novel, she got creative. “It was interesting because I created Wash Day as just a one-shot thing. I didn’t plan to make it larger,” she tells ESSENCE. “And so, when approached by Chronicle, I’m like, ‘OK, how can I make this a bigger comic without it feeling forced?’ That’s when I thought of the short story concept. That made it a lot easier for me to focus on and come up with things.”

Rowser and Smith worked on the graphic novel during the onset of the ongoing COVID-19 pandemic. It was a challenge for both of them, but Smith says, “the joy of getting to draw these characters who I love, and their hair, because hair is my favorite thing to draw… after a while, it just became really therapeutic getting to work on all these stories.” In the end, their hard work paid off.

Four years after releasing Wash Day, Rowser and Smith now have an expanded version of the original mini comic: Wash Day Diaries. The graphic novel, which was released this summer, follows four ride-or-die best friends — Kim, Cookie, Nisha and Davene. Through five interconnected short comic stories, Rowser and Smith use the personal experiences of Black hair routines as a window into the everyday lives of these four vibrant, relatable, nuanced characters. The book explores friendship and self-love, while also candidly touching on mental health, the gentrification happening in their Bronx neighborhood, street harassment and generational trauma. Wash Day Diaries, in essence, is a love letter to Black women, their hair and their joy, and the beautiful healing powers and resilience of Black sisterhood.

“All I care about is Black women, and all I wanted to do is create comics for Black women, because we’re so underrepresented [and] misrepresented in comics. I wanted to do something that was so specific to us that a lot of us would be able to relate to,” Rowser says. “You know, we have different styles and hair types and things like that, but I wanted to focus on something that we do [often], that takes up so much of our time. We put a lot of attention into our hair, and I wanted to celebrate and focus on that because our hair is beautiful.” 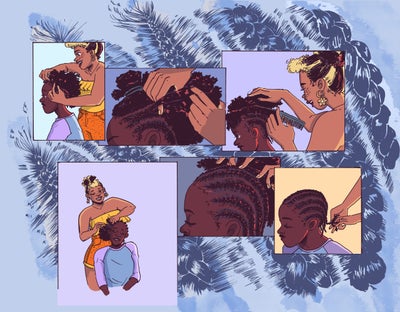 Most of the short comic stories in the graphic novel contain minimal dialogue, allowing readers to focus on the expressions of each character, the intentional color palettes for each story, the small details in the background and Smith’s incredible artwork.

Smith, a Jamaican cartoonist, had recently graduated with an MFA from the Center for Cartoon Studies in Vermont when she first illustrated the Wash Day mini comic. Her expressive art style and distinct approach vividly shines through in Wash Day Diaries, and can be recognized in her other comics, such as The Saddest Angriest Black Girl in Town, an award-winning autobiographical comic that explores the intersection of Blackness and mental health, and Nubia: Real One, a YA graphic novel and indie interpretation of DC Comics’ first Black woman superhero, Nubia.

“I thought [drawing] superhero comics was the only way I was going to make any money,” Smith says. “Getting the opportunity to work with Jamila made me realize more of the comics I wanted to make … which is [comics] only focused around Black people, and Black femmes in particular.”

Despite the growing number of diverse comics being released each year by people of color, Black folks are still underrepresented in comics and within the white-dominated comic book industry. According to career and data analysis website Zippia, 79.4 percent of comic book writers in 2019 were white, while only 5.8 percent were Black or African American. This disparity not only affects Black people who are working in the comic book industry, but it also makes it harder for Black folks, particularly Black women and nonbinary people, to find and read comics that authentically reflect themselves and their lived experiences. That’s what led Rowser to create Black Josei Press, a publishing company she founded in conjunction with the release of Wash Day in 2018.

“I started Black Josei Press, and what I am doing is publishing comics by and for Black and Brown women and nonbinary folks, where we just get to tell stories about ourselves, for ourselves, without feeling the need to whitewash it or make it more palatable to a larger audience,” Rowser shares. “There’s so many amazing creators, and I want them to have the freedom to tell their stories.”

In addition to co-creating Wash Day and Wash Day Diaries, Rowser and Smith worked together on the first chapter of MariSole, a webcomic series for Nike’s SNKRS app that chronicles the life of 16-year-old sneakerhead Marisol “Mari” Garcia, an Afro Dominican teen from Washington Heights. Rowser has also written and published many of her own comics, including Ode to Keisha, an award-winning autobiographical story that explores friendship, racism and identity, and Wobbledy 3000, a sci-fi tale about twerking. Throughout the process of creating these comics, the writer-artist duo has formed their own sisterhood, which they hope to channel into future projects.

Looking ahead, Rowser and Smith plan to continue to work together to produce more comic books that center and celebrate Black women. They hope the stories they create will invite Black women and nonbinary folks to read comics, and allow them to feel seen and inspired.

“A lot of the times when it comes to us, we have to prove ourselves and we don’t have a lot of chances to [do that]. If [big publishers] do want us to write a book, it’s about our pain or something historical. I want to show, especially with Black Josei Press, that all stories are important,” Rowser tells ESSENCE. “I want to show we can do it all. It doesn’t just have to be about Black pain. It can be about Black joy.”

“The reaction to Wash Day Diaries from Black women has been really amazing,” Rowser continues. “Robyn and I have a very similar goal of wanting to make comics because we love comics, but also [because we] want to make comics for people who have never read them before, especially Black women, and that’s happening.”