JANET STREET-PORTER on councils bringing in an outdoor smoking ban

JANET STREET-PORTER: I can’t stand smoking but who gave the dictatorial busybodies on our Nanny State councils the right to tell people they can’t even light up in the open air anymore?

I’m not going to mince my words – smoking is a disgusting habit.

But should that entitle the Health Police in our town halls to ban citizens from exercising their right to smoke outdoors? Were we consulted before this draconian decision was taken? Of course not – once again the nanny-state-knows-best mob are acting on our behalf.

It’s all part of a pattern of behaviour which sees council officials all over the country adopt a series of measures to ‘improve’ our lives without bothering to exercise democracy by putting it to a vote.

First, they built cycle lanes through our city centres, reducing traffic to a crawl.

Then, these dictators dreamt up ‘traffic free neighbourhoods’, blocking up quiet residential backstreets so that emergency services can’t reach the sick and dying and police can’t catch gangs. 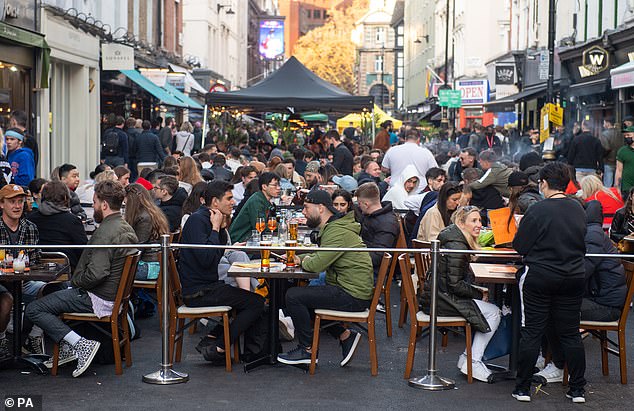 The barriers have forced all the traffic onto main roads where it sits gridlocked, spewing out the fumes the dictators were trying to reduce. Well done everyone at the council!

Now, (with no consultation), five city and local councils covering a large area of England are introducing rules banning smoking outside pubs, cafes and restaurants.

Lighting up on a pavement will soon be as illegal as waving your willy about. One whole county – Oxfordshire – has gone further, planning to make it illegal to smoke in play areas, outside school gates and even in your car. They want to be a smoke free county by 2025, five years ahead of the National target.

At least one local authority is making smoke-free zones a non-negotiable condition when granting a liquor licence.

I come from a family of nicotine addicts.

My dad was a heavy smoker – until he had a heart attack, followed by triple bypass surgery.

My mum was equally bad – she could not take a fag out of her mouth long enough to be able to visit him in hospital. I had to ferry messages between the two, while she puffed away at a Woodbine in the car park.

My sister smoked heavily until she died of lung and brain cancer.

So, you can understand why I don’t smoke.

But I strongly believe in allowing others the freedom to live their lives as they choose. Which is why I totally oppose the banning of smoking in the open air. 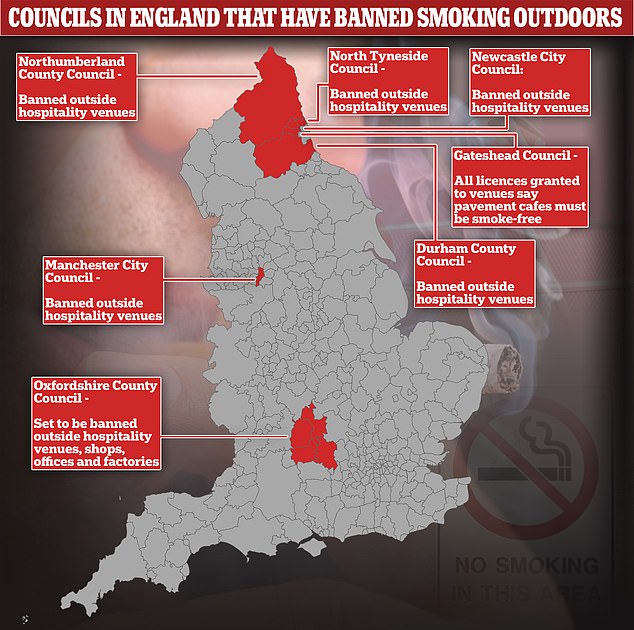 Did you even know that the government has decided that Britain would be ‘smoke free’ by 2030?

No, neither did I. Soon, they plan to issue a ‘tobacco control plan’ – introducing measures to reduce the number of smokers to just 5 per cent from the current level of 14.1 per cent or 6.9million people.

That is a laudable goal, because smoking-related conditions killed around 90,000 last year, more than Covid (75,000 deaths) did.

But you can’t deal with addiction by imposing bans, nagging and demonising a habit. I know because I’ve lived with an alcoholic (who no longer imbibes) for many years. The last thing any addict needs is a Nanny – especially a State-Sanctioned one.

Education and encouragement are key, not fines and negativity.

And what about the impact of these non-smoking bans on pubs and bars? For the first time in months, we’re eating and drinking outside with friends, enjoying the warmer evenings. Thank god it’s been sunny for the last few days, because the hospitality business is on its knees. They are desperate for any customers, even people who smoke!

Nearly a quarter of pubs, restaurants and bars have not re-opened, because social distancing makes it uneconomic. They are praying that June 21st will see the end to restrictions, otherwise, the majority of these businesses will go bust.

They’re not just short of cash, they can’t get staff. Since lockdown, many have returned to Europe and will find it difficult to return. Others have been on furlough and have then changed jobs which pay better than catering or serving food. Many fear that working in hospitality places them at risk from catching covid because the government is not sending out clear messages that it’s safe. 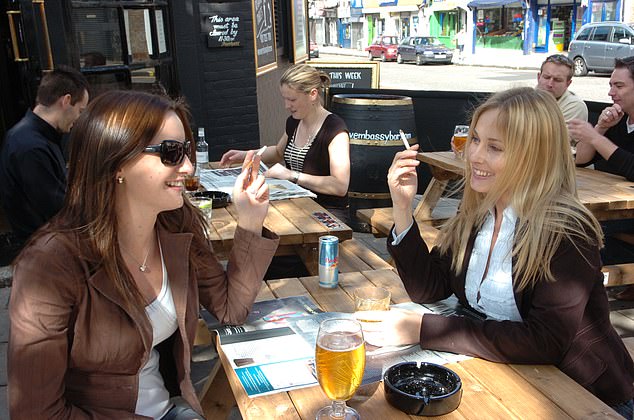 As a result, even top restaurants say they can’t open for lunch or are operating reduced hours because they have failed to recruit enough highly trained staff. Overall, the industry says there’s a huge shortfall of 188,000 workers.

Tim Martin, the pro-Brexit boss of Wetherspoons, wants EU worker visa to be introduced to help reduce the problem. It might seem a bit rich, from the bloke who couldn’t wait to leave Europe, but he’s never been anti-immigration.

One-in-five smokers are aged between 25 and 34. One-in-four work in routine or manual jobs, compared to just 2.5 per cent of professionals or managers. The message is clear – banning smoking affects the lower paid more than the posh people. And why shouldn’t they smoke if it gives them pleasure? I’m not being patronising, but why is smoking worse than cocaine, the ‘fun’ drug of the white collar worker?

If we want people to stop smoking it has to become unfashionable. Being unaffordable hasn’t worked, people will buy fags before food.

The best thing about British society has always been our tolerance of others. Smoking might not be my secret sin, but I would fight for others to smoke if they wish, albeit not in my immediate vicinity.

Pubs and bars don’t need even more red tape. They are poised, like rudderless ships, waiting for Boris, the Duke of Ditherdom, to tell them if they can re-open without social distancing on June 21st. What they don’t need is to the cost of employing stewards to implement an outdoor smoking ban.

Everyone knows that smokers will just regroup a few yards away, out of sight. The air we breathe will not change much either way.

Smokers are already forced to be a huge amount of tax – £12-£13, every time they buy a packet of 20. Why not go the whole hog and force them to wear SORRY, I’M A SMOKER headbands at the same time?

Damn! I bet someone from Oxfordshire council is already putting that in a memo.