Home » Lifestyle » JANET STREET-PORTER: Vaccine is wondrous but we could still blow it

JANET STREET-PORTER: Vaccine is wondrous but we could still blow it

JANET STREET-PORTER: The vaccine is wondrous news but, between the government that brought you the PPE and test and trace fiascos and social media which lets anti-vaxxers run riot, we could still blow it yet

This week came the good news we have been waiting so long for – the world’s first Covid vaccine that is safe and over 90% effective and which should be available in the next few months.

It looks very much as if chance the first doses could even be ready by early December – the best Christmas present ever.

But for every piece of joy, there have to be the haters, dissenters and doomsters. Those who seek to spread hate and fear.

Things are so bad that GCHQ have announced a task force designed to disrupt the tidal wave of propaganda flooding onto the internet from hostile states like Russia, North Korea and China.

It takes many forms, from fake accounts, ‘bots’ bombarding public figures on Twitter with filthy abuse, to cleverly leaked spurious rumours and untruths about politicians and key businesses. 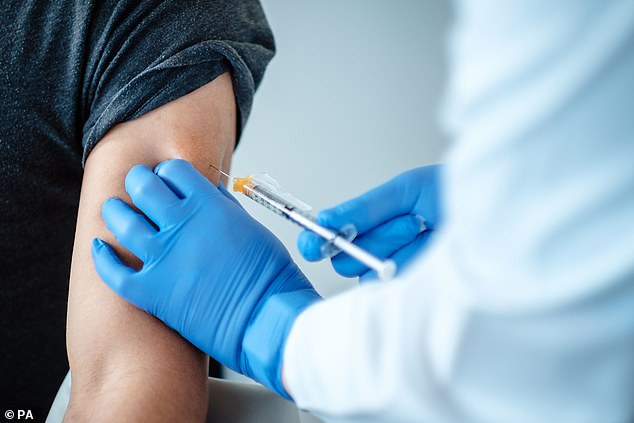 Last July, leading scientists attacked celebrities such as Woody Harrelson, Calum Best and Lee Ryan for ‘fanning the flames’ of false conspiracy theory that blamed 5G technology for coronavirus when there is absolutely no proof of a connection.

The result of false rumours and disinformation is that people become reluctant to visit hospitals for fear of contagion.

Internet trolls spread vile assertions about race, causing social unrest, not to mention harming our confidence in the medical profession by disputing the efficacy of drugs and vaccines to fight pandemics like Covid-19.

The aim of the scaremongers is to frighten us into passivity, too scared to opt for a vaccine which would enable our societies to reopen and life to return to normal.

If the secret service has decided to step out from behind their normal screen of discretion and coded language and let every one who uses the internet know serious danger lurks at every step, why have we not heard from Mark Zuckerberg, and his stooge Nick Clegg?

Or Jack Dorsey, the founder of Twitter? Claiming they cannot stifle free speech, tech companies that own Facebook, Instagram and Twitter are nimble enough to avoid (or as they put it ‘minimise’) tax and but criminally slow to shut down the torrent of falsehoods they publish.

Immediately news of the new covid vaccine broke, the anti-vaxxers went to work online, linking it to the Thalidomide scandal of the 1960’s, which resulted in over 10,000 children being born with severe deformities, after their mothers had taken the drug to combat morning sickness during pregnancy.

They bombarded my Twitter account because I dared to celebrate the arrival of a game-changing vaccine, asserting (wrongly) that Bill Gates is guilty of ‘crimes against humanity’ in India because his foundation has spent millions funding a life saving anti-malaria vaccine.

The haters claim the new Covid vaccine is unsafe and not properly tested, and want people who participated in the trials to have kids to see if any birth defects would result!

These myths, unsubstantiated rumours and fairy tales are spewing out from people who have no followers, scanty profiles and who are probably not even real, but created by geeks somewhere in Russia.

Most rational folk celebrated the announcement that Pfizer and BioNtech had developed this ground-breaking new form of vaccine in record time and tested it on 43,500 people in three continents. 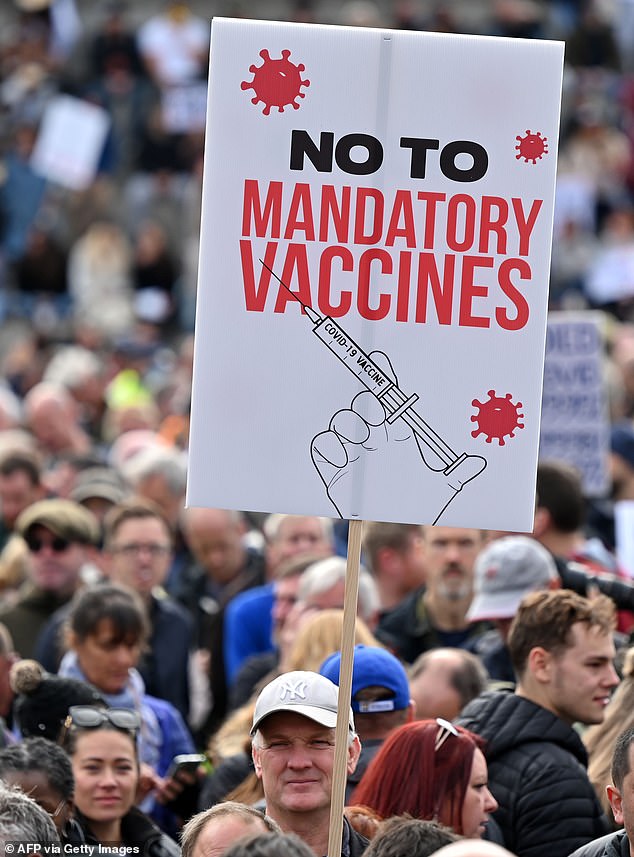 For every piece of joy, there have to be the haters, dissenters and doomsters. Those who seek to spread hate and fear. Pictured, protesters in Trafalgar Square in London on September 26 at a ‘We Do Not Consent!’ mass rally against vaccination and government restrictions designed to fight the spread of coronavirus

There are still hurdles to be completed; it’s not known yet whether the vaccine will prevent us catching and spreading the virus or just stop us being ill if we are carrying it already. It will require two doses, injected three weeks apart. And the vaccine has to be transported at minus 80 degrees centigrade.

Even so, the normally cautious medical establishment has recognised that the vaccine represents our best chance so far of combating the spread of coronavirus. By comparison, the flu vaccine is less than 40% effective.

The British government has pre-ordered 10 million doses of the new vaccine with another 30 million to follow. Of course, there will be winners and losers.

Winners are the rich investors who bought shares in the successful pharmaceutical companies. The stock market bounced up at the news, and travel companies and retailers will be praying that their businesses will soon be able to operate again and start the slog back to profitability.

Losers will be companies that thrived during lockdown, from takeaways to supermarkets, Amazon (not that they will miss a small dip in their earnings) and book publishers.

Winners will be small businesses, workers facing redundancy. The restaurants, cafes and pubs which add so much to everyday life. In human terms, the winners will be the anxious sons and daughters unable to meet or even see their elderly parents cocooned in care homes, who are slowly deteriorating mentally, starved of human touch.

There’s much to celebrate, but ample reason to be anxious. When the vaccine finally arrives in the UK and is certified for use, distribution will be in the hands of the same crew who have mismanaged up test and trace.

Baroness Dido Harding, tasked with leading the roll out of the test and trace scheme, was at her buck-passing best this week when she told MPs it wasn’t her job to predict when there might be surges in testing demand – such as when all the schools reopened in September.

Even as Health Minister Hancock announced that mass testing will be rolled out in 67 local authorities, the number of contacts traced in the last week of October remained embarrassingly low- at less than 40%. Hardly the ‘world-beating’ service Boris once trumpeted so proudly. 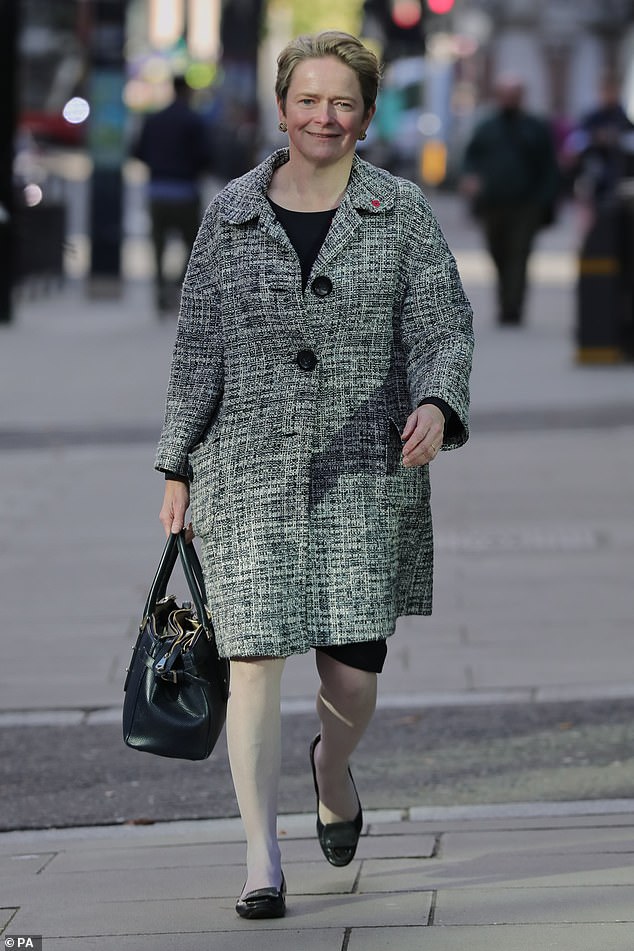 Baroness Dido Harding, tasked with leading the roll out of the test and trace scheme, was at her buck-passing best this week when she told MPs it wasn’t her job to predict when there might be surges in testing demand – such as when all the schools reopened in September

Meanwhile it’s been revealed that Kate Bingham, head of the vaccine task force, another ‘jobs for the pals’ appointment, has been supported by a team, of freelance PR operatives she hired at a cost of £670,000 – when a press office already exists which is perfectly capable of doing the same job.

She also failed to mention that she had invested in two of the companies involved in the race to create drugs to fight the virus. Don’t bother complaining – she’s off to another job at the end of the year, anyway.

As for who will receive the vaccine, the official list of who will get it first is just begging be circumnavigated by the rich and influential. The government says that priority will be given to older adults in care homes and their workers, then anyone over 80, with ten categories are divided by age.

This seems a pretty basic calculation – what about the mentally vulnerable, those who are shielding, the BAME community who seem to have been hit harder than most?

This vaccine could changes lives for the better – but one more problem remains. The doom-mongers on the internet have been so successful in concocting fear that less than half of us would agree to be vaccinated as soon as the jabs are available and would want the politicians to try it first.

That’s the scandal the Mark Zuckerberg and co must live with.