Wander anywhere in the Blue Mountains during the daytime and it's likely your ears will soon be ringing with the sound of countless cicadas singing for a mate.

Most will likely be cicadas of the greengrocer species known for their large size, or perhaps Double Drummers – both of which can produce noise exceeding 120 decibels that is painful to the human ear. 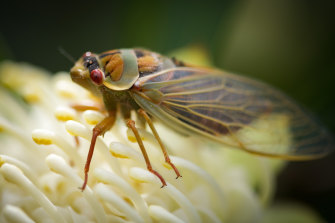 A recently emerged greengrocer cicada – also known as a masked devil or yellow Monday – rests on a white Waratah flower near Mt Wilson in the Blue Mountains.Credit:Wolter Peeters

That life cycle, which varies across the 246 described cicada species in Australia, does leave some varieties vulnerable to wildfires.

Some adult cicadas survive only a matter of weeks until they mate. Females then lay eggs that can be destroyed by flames if they haven't developed into nymphs capable of burrowing to safety in the soil.

This year's crop of greengrocers likely dates from 2013, a spring that included big fires in the Blue Mountains, but they were earlier in the spring. "These cicadas were lucky," Dr Moulds said. 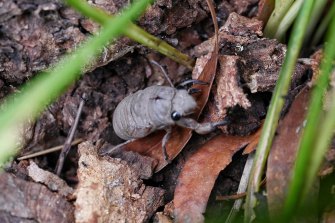 A cicada emerges from the soil at Burralow Creek, near Bilpin.Credit:Nick Moir

Males are responsible for the cicada din, the noise created by the flexing and relaxing of internal muscles that cause ribbed membranes, known as tymbals, to buckle inwards and outwards.

Those males wisely close off other membranes, known as tympana, that serve as ears so they won't be deafened by their own song.

Research suggests the cicada chorus both wards off predators, such as birds, and also helps conceal individuals. 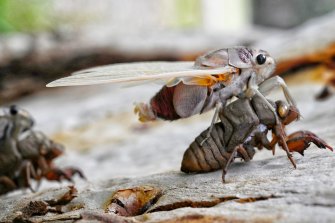 Cicadas leave their shells at Burralow Creek near Bilpin.Credit:Nick Moir

Dr Moulds estimates he has probably named about 40-50 of the 246 described species of cicadas in Australia, many of which are only found in this country.

That still leaves at least 70 per cent – or perhaps 500 or more Australian cicada species – to be named, he said.

Adding to the challenges for cicada watchers is that the same species can come in a variety of colours.

In the case of greengrocers, for instance, different hues can make them blacker, as in the masked devil variety. Yellow Monday is the moniker for those that are more orange, while there is also a blue moon version that is quite rare, as the name suggests. 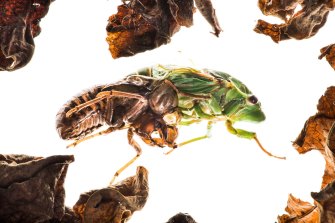 The cicadas shed their skins multiple times during their lengthy lives as nymphs, living underground and sucking the sap of trees. Bushfires that kill trees, as was the case in many parts of NSW after the Black Summer last year, would likely have killed the nymphs feeding off them too, Dr Moulds said.

Once they emerge, the final shedding of their skins marks their arrival as adults, ready to mate and to fly.

Professor Cassis said now is "an important opportunity" to see if the bushfires have caused major changes to the biota, with some species faring better than others.

UNSW this week received more than $1 million in federal support to fund two projects aimed at assisting the recovery of wildlife after the bushfires. 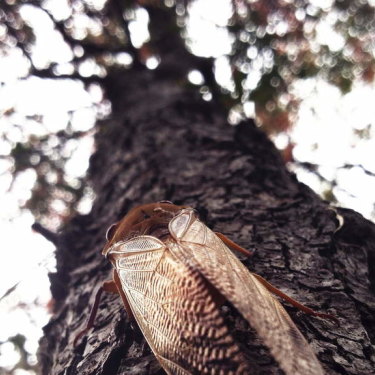 A cicada in a tree in Sydney's northern beaches.Credit:Nick Moir

The larger of the two grants will study how the fires affected invertebrates, from beetles to snails and bees, many of which provide essential services to the forests from pollination to nutrient recycling, UNSW's Professor Shawn Laffan said.

Much of this area was previously surveyed for invertebrates by UNSW and the Australian Museum, including a study of the North East Forests in 1993, giving researchers a baseline for comparison.

The other study will examine how the fires affected reptiles in the sandstone landscapes around Sydney.

The most important news, analysis and insights delivered to your inbox at the start and end of each day. Sign up to The Sydney Morning Herald’s newsletter here, to The Age’s newsletter here and Brisbane Times‘ here.