Kate blamed stress for a racing heart. A smartwatch told her otherwise

It was a cold, clear night in Melbourne on May 20 as Kate Bendall lay rugged-up in bed reading her Kindle. But something felt off. She woke her husband Simon and told him she was having palpitations. “It felt like there was a horse race going on in my chest,” the 50-year-old nurse said. “It felt scary.”

Simon sat up and noticed his wife looked pale. He tried taking the pulse on her wrist, but struggled to locate it. He remembered that his Apple watch had recently been updated with an ECG app, so he gave the watch to Kate. Using the feature they were able to measure the rhythm and strength of her heart’s electrical signals. 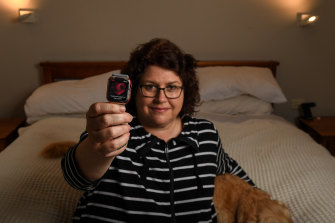 Kate Bendall credits her husband’s Apple Watch with discovering she was having an AFib.Credit:Penny Stephens

“To be honest, I didn’t expect it to work,” said Kate. Besides, after a stressful week, she thought she was having a panic attack. “But it showed something was really wrong.”

The ECG notified her she was experiencing atrial fibrillation (AFib), the most common abnormal heart rhythm and a major cause of stroke in Australia. A second ECG five minutes later confirmed she was still in AFib.

They called an ambulance and relayed the ECG information to the dispatcher who advised Kate to take Aspirin to minimise the risk of clots, while she waited.

Kate, who now has her own watch, spent three days being treated for AFib in hospital and is now on medication to manage the condition.

“Sometimes Kate goes ‘Oh am I being a hypochondriac?’ And it was the validation that no, something was not right,” Simon said. “It’s game-changing technology.”

Long-gone are the days when a watch was just a watch. Now, they won’t just tell you the time, they can also add time to your life.

Late last year, the Withings ECG smartwatch became the first in Australia to receive TGA-approval. Other brands, including Apple, followed suit and the ECG apps are being promoted as the hottest accessory to come with your watch.

And the health-focus of smartwatches is ramping up even further. Last week, Apple announced new features including a new mindfulness app, the ability to measure respiratory rate during sleep, health-sharing and walking steadiness. That follows the TGA-approval for the ECG app and heart rhythm notifications they finally received in April.

The move into the heart health space began years ago with the use of heart rate monitors, explains Dr Sumbul Desai, the Vice President of Health at Apple. People used them to gauge their calorie burn during workouts, but customers kept sharing stories about discovering an abnormality that eventually led to a life-saving diagnosis.

“That motivated us to dig in deeper to heart health… and we have just continued to pull on that thread,” Desai said. It became an extension of their health aim: “How do we empower individuals to live a healthier day?”

As well as being common, AFib is often asymptomatic and yet early diagnosis can save lives. Given that the basic technology was already available in the heart rate monitors, it is no surprise tech companies have focused on the condition.

But what do the experts think about it?

“I see the value in really empowering consumers to manage and be aware of their own health,” says Ruth Webster, a Professorial Fellow at The George Institute for Global Health.

“As a tool, it’s very clever,” agrees Ben Freedman, a Professor of Cardiology at the University of Sydney. “About a third of [strokes] are related to AFib. If people with AFib are put on anticoagulants, if they’re at high risk, you can reduce it by about two thirds.”

But herein lies the rub. While the experts agree that these sorts of innovations are indeed game-changing, they are not risk-free.

For instance, AFib does not have the same stroke risk in a 40-year-old as it does in a 70-year-old, yet 40-year-olds are more likely to have a smartwatch. If low-risk consumers pressure their doctors for medication or invasive tests because they have received an AFib notification, it might even lead to harm.

“You wouldn’t want to be putting people at low risk of stroke, on blood thinners which may cause bleeding,” Freedman said. “It’s a two-edged sword. I think it’s a great technology, but… we’re not quite sure what to do with it yet and the harms could outweigh the benefits. The genie is out of the box unfortunately.”

Webster adds that there is the risk of technology replacing the human touch if people stop going to the doctor.

“You might be screening your heart rate on your Apple watch but if everything is fine you might not go back to your GP,” she said. “Your GP might check your cholesterol, your blood pressure, check other stuff you might have missed.”

Desai insists the doctor-patient relationship is one they intend to “enhance not replace”. The technology isn’t intended to be diagnostic, she adds, but an extra piece of the health puzzle for individuals to take to their GPs. A piece of the puzzle that might encourage behaviour change, not medication.

“Realising you can make the intervention of seeing someone about your sleep apnoea, exercising more, drinking less… That’s really powerful too,” Desai said. “We are trying to provide the user with more information so they can engage in healthier behaviours.”

Make the most of your health, relationships, fitness and nutrition with our Live Well newsletter. Get it in your inbox every Monday.