Home » Lifestyle » Killing it: the original riot grrrls return, just as we need them most

Killing it: the original riot grrrls return, just as we need them most

When we last spoke in 2013, Kathleen Hanna was living in New York, and about to tour Australia with her then-band, The Julie Ruin. The band that first brought her fame and notoriety, Bikini Kill, had disbanded 16 years earlier, after laying the foundations of what would become known as the riot grrrl feminist punk rock movement.

From 1990 until 1997, Bikini Kill encouraged women and girls to start bands and make fanzines, as a way to not just build a network for female voices, but to inspire cultural resistance. Hanna continued this with her next band, the more electro-dance trio Le Tigre.

But by 2013, Hanna was also undergoing her final treatments for late-stage Lyme disease, a debilitating tick-borne autoimmune disorder she had contracted as a child, but which had lain dormant until adulthood. 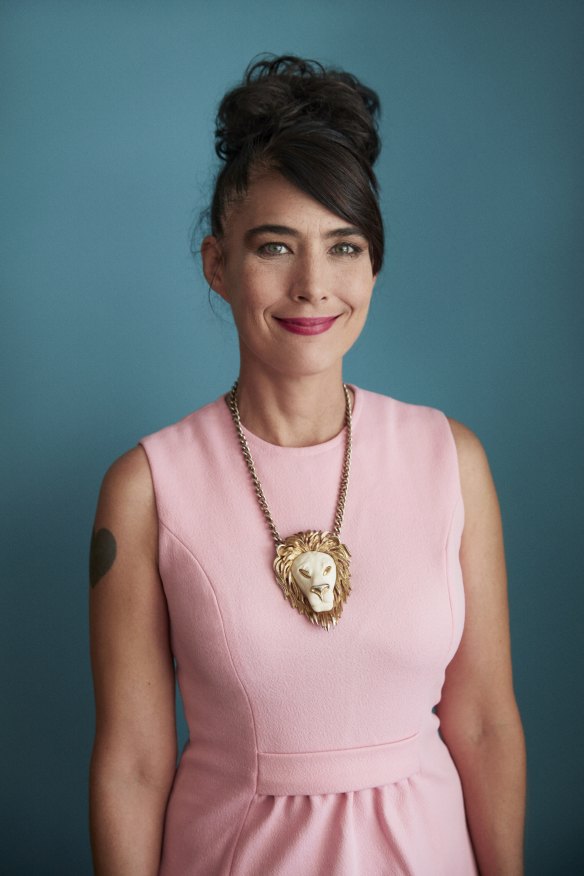 Bikini Kill’s Kathleen Hanna is optimistic about the Me Too Movement’s changes.Credit:Jason Frank Rothenberg

The illness had at that point kept her away from the stage for three years. It became a key chapter in her life story that was told in Sini Anderson’s documentary released that same year, The Punk Singer.

Well, almost 10 years ago, but so much has happened since. Hanna’s health is thankfully back to normal. The Julie Ruin ended – “I feel like it came to its fruition and it was very much a New York band and I don’t live in New York any more” – and Hanna and her husband, former Beastie Boy Adam Horovitz, moved to the other side of the US to Pasadena, California.

Oh, and she got her old band back together.

In late 2017, Hanna and original Bikini Kill members Kathi Wilcox and Tobi Vail – Vail is credited with inventing the term ‘riot grrrl’ – were invited to play at a New York launch for a book on British post-punk all-women band the Raincoats.

“As is typical Bikini Kill, we had no plan,” recalls Hanna, who herself is credited with inadvertently naming the song that would become the anthem of a generation when she wrote ‘Kurt smells like teen spirit’ on the wall of Nirvana frontman Kurt Cobain. “We just got together and did one song, a super-easy song [For Tammy Rae], but I had to look at my fingers the whole time because I hadn’t sung and played guitar at the same time for a while. But it was really fun and, I think, more than anything, it was seeing the Raincoats [also perform] that night and how vital they were and what a great show it was. 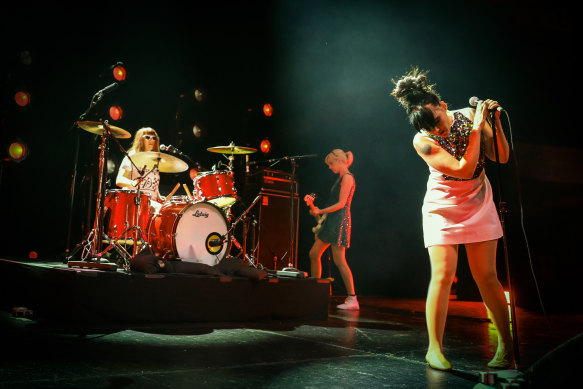 Hanna on stage with Bikini Kill at the Hollywood Palladium in 2019.Credit:Debi Del Grande

It went well. So well that in 2019, Bikini Kill formally reunited.

Hitting the road for the first time in 22 years, Bikini Kill enjoyed more success than they had in their heyday. The band that two decades prior had divided audiences with confrontational live shows and call-to-arms songs such as Rebel Girl and Suck My Left One, and Hanna’s exhortations for “girls to the front” of the stage, played sold-out shows in New York, Los Angeles and London, and even headlined Riot Fest in Chicago. Before coronavirus sidelined further scheduled dates, Bikini Kill were, well, killing it.

“It was really remarkable how we remembered this shared kind of musical language that we have with each other,” says Hanna.

This year Bikini Kill returned to touring, with live reviews indicating they’ve lost none of their fire and mettle. And in February 2023, they will return to Australia for the first time in more than 25 years for a national tour that kicks off in Hobart at MONA Foma and includes shows at the Sydney Opera House, Golden Plains Festival and an all-ages show at Melbourne’s Forum Theatre.

Bikini Kill formed in Olympia in Washington state in 1990 with Hanna on vocals, Wilcox on bass, Vail on drums and guitarist Billy Karren. They would sometimes switch instruments during shows (and sometimes still do).

The title of their debut album, 1991’s Revolution Girl Style Now, left little doubt of the band’s manifesto, nor of their DIY ethic, releasing it only on cassette. Their best-known song, Rebel Girl, became a feminist punk anthem. It was recently named 10th best song of the ’90s by influential music publication Pitchfork.

In 1996, Bikini Kill toured Australia for the first time as part of the one-off national touring festival, Summersault. It was life-changing for Hanna; it was then that she met her husband to-be Adam ‘Ad-Rock’ Horovitz of fellow US music disruptors the Beastie Boys, who were also on the bill. They married in 2006.

“There were a lot of couples that formed on that tour,” she says, laughing.

So, Australia can lay claim to Hanna finding true love? “It’s Adelaide!” she specifies. “It was the flowers in Adelaide.”

Bikini Kill returned to Australia the following year for their own headline tour, only to disband later that year. A key reason for the breakup, says Hanna, was their inability to tell each other what they needed – a problem that has been erased with the passing of time.

“When you’re older, communication gets a lot better than it was in your 20s; we’re all able to speak up for ourselves and say ‘this is what I need’,” she says. “And no one being able to do that when we were first a band is a big reason why we broke up, because we weren’t taking care of ourselves.” 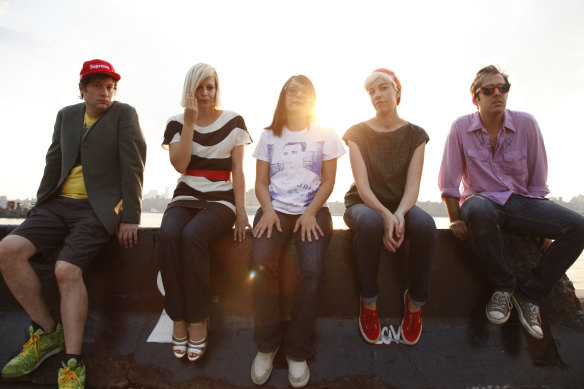 Another reason was that Bikini Kill was a difficult band to be in. Their strident feminism against a very male-dominated industry meant they were adored and despised in equal measure, with the forthright Hanna usually in the crosshairs for the latter – often expressed via projectiles hurled at the stage. Many people weren’t ready for conversations or concepts that today are far more accepted.

Yet as much as things change, much stays the same: more women than ever are now playing music. The MeToo movement has made gender-based violence and other predatory behaviour more visible and accountable. Hanna says that Bikini Kill’s now “icon” status has made it easier for them, but thinks many young bands starting out “are still getting a lot of the kind of same shit that we got back then”.

“It may have changed for us a little but it definitely hasn’t changed for everybody, which is depressing,” she says. “I mean, there’s still guys groping girls at our shows and I’m just like ’in what world do you think you can go to a Bikini Kill show and get away with that?’. But there’s guys who get their jollies in different ways and that’s their specific version of hatred I guess, coming into a feminist space and trying to make it gross. We kick them out.”

From the seemingly eternal and enduring affront of gropey guys at gigs, to the more recent bombshell in June of the US Supreme Court’s overturning of the Roe v Wade legislation, which had protected women’s legal rights to access abortions, Hanna still has plenty to keep the feminist fire blazing.

“It was overturned right before we went on stage. I hadn’t even really been able to process it,” she says, adding that she views it as part of a broader, more sinister malaise. It’s about that they’re trying to take people’s bodily autonomy away, whether they’re wholesale killing black people in the streets, or through an inept medical system, or they’re taking away women’s rights to contraception, people’s rights to having an abortion; it’s all part of the same thing,” she says.

“It’s about taking away people’s rights to live, to simply exist. It’s like saying ‘you’re just not important, you aren’t important enough to save. And we don’t care’. And I think that kind of intersectional conversation is one that really needs to be had and obviously, when I’m on stage it’s very one-sided because I’m the only one talking.

“In Bikini Kill a lot of our songs are really angry, and I express a lot of anger, but I think in expressing anger there’s a lot of joy and a lot of hope. There’s a lot of optimism in that, so I don’t feel the need to have really intense political diatribes every night.”

TAKE 7: THE ANSWERS ACCORDING TO KATHLEEN HANNA

All-ages shows remain important for Hanna, though she doesn’t advise bringing very young children to see Bikini Kill. Self-censorship isn’t her style, and what she has to say at shows isn’t always for tender young ears.

“What’s really funny is a lot of times it’s dads bringing along their very young, like, six-year-old daughters because they heard Rebel Girl, and they don’t know what they’re in for,” she says. “And then between songs I’m talking about rape. I’m not going to change what I’m going to say because you decided to bring your six-year-old. You’re going to have to have that tough conversation with your kid in the car on the way home, dumbass.”

What she does enjoy is seeing the connections made between multi-generational audiences, free of prescriptive preconceptions about what certain age groups “should” be doing.

“Having them be in the same room and knowing that there could be a 14-year-old noticing a 50-year-old’s cool glasses and be like ‘hey, where did you get those?’, you know? Even those small exchanges make me feel really, really good about bringing the people together.”

Bikini Kill play The Forum on March 7 (sold out) and March 8 (all ages shows). forummelbourne.com.au. They also perform at MONA FOMA in Hobart, Feb 26; Perth Festival, Perth, March 1; The Tivoli in Brisbane, March 3 and the Sydney Opera House Concert Hall, March 13. (all shows are all ages).