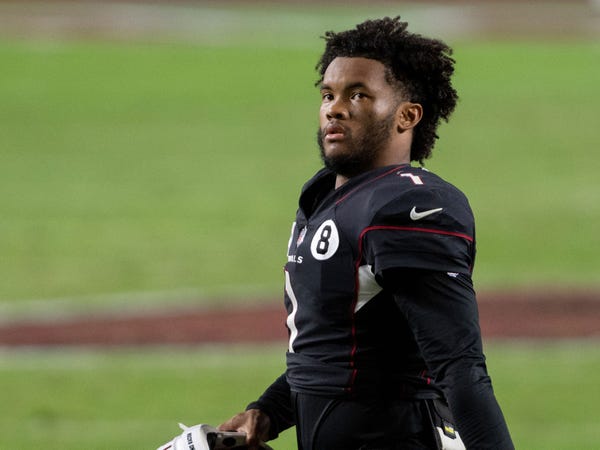 Kyler Murray is having quite a year.

After a dramatic overtime win against the Seattle Seahawks on Sunday night, Murray took home NFC Offensive Player of the Week honors for the second time in his career. In just his second season as the starting quarterback for the Arizona Cardinals, Murray has the team off to a 5-2 start to the season and looking like potential Super Bowl contenders come playoff time.

Off the field, Murray has just announced a new partnership with the BodyArmor, joining an athlete roster that already includes Christian McCaffrey, Trae Young, CeeDee Lamb, and Sabrina Ionescu aligned with the brand.

Murray spoke with Insider about how he paired up with BodyArmor, his big game on Sunday night, and what it's like to step into the huddle with Larry Fitzgerald.

This interview has been slightly edited for clarity.

You're now an equity partner with BodyArmor — how did that deal come together?

Over quarantine, I'm in the house, and all I could do was work out. I had to find a drink that I love to drink and got me great hydration as well. I started drinking BodyArmor as a daily deal. Obviously, them being interested in me and me being interested in them, here we are.

Do you have a go-to flavor?

And in quarantine, are you getting cases? Pallets delivered? One fridge entirely full of strawberry banana BodyArmor?

At first, I wasn't getting the shipments, so I was going to the gas station any chance I could to stock up, but now I got a whole fridge's worth.

I wanted to talk a little bit about your big game on Sunday. Your first touchdown to DeAndre Hopkins — you're smiling before you even throw the ball. You don't even need the laces on this one. Can you talk me through that play?

[Laughs] You kind of had to be there, but I'll describe it as best as possible. We got a hard count — playing with the cadence trying to get the defense to jump offsides. And we had one of our coaches on the sideline screaming, getting everybody's attention.

We snapped the ball on a random count, they're not ready, our receivers take off, and it's just my job to put the ball on Hop. He made a great play, obviously.

Did you know that you were smiling? Could you tell? Or was that something that you saw on the replay afterward?

After the game, everyone was hyped up, having a great time, and I saw it on social media that they had put out there that I was smiling or that I already knew that it was going to be a touchdown before I threw it. But I think it was just a heat of the moment thing — I can't recall, you know, smiling before I threw it. But it's funny for sure.

Another big moment in that game is your final drive of regulation. You need a field goal to tie, you're out of timeouts, and Larry Fitzgerald takes over duties grabbing the ball and rushing it to your center whenever a player goes down, making sure you are clocking the ball as quickly as you can.

Is there a call before that last possession like "Okay, two-minute offense, Fitz's is getting the ball," or is that just Fitz being a veteran, knowing the situation?

We coach it every day, honestly. We've had so many hours over quarantine to watch film over Zoom, that's just part of our two-minute. Credit to our coaches for making us aware of those moments. We've practiced it so many times.

Obviously, we don't even have to tell Fitz that — he's played so many games of football in his life. So for him, that's just his natural instinct. Trying to get the ball as quick as possible and clock it so we can save time. But that was a huge turning point in the game to be able to go down there, 53 seconds, no timeouts, to be able to tie the game and go to overtime, that was a crucial moment.

Watching it, I couldn't help but think, "Man, that guy has played 17 years in the NFL. He knows what he's doing out there."

Yeah. You can't trick him.

What's your relationship with Fitz like? I'm imagining you coming in as a young leader on this team, and he's a legend. Was there ever any tension there?

Never any tension. Obviously, receiver-quarterback relationship, when things aren't … Say we miss a route, or I miss a throw or stuff like that — he'll never drop the ball. It's always my fault. Let's put it that way. But he's like a big brother to me.

Have you ever yelled at Larry Fitzgerald?

Have I ever yelled at Larry? [pause]

The game was originally going to be an afternoon game, but you got bumped to Sunday night due to the Raiders COVID scare. When did you find out that you would be playing in primetime?

I want to say it was Thursday. Pretty late in the week. Everyone in the building kind of had an inkling that we could be bumped, playing Russell Wilson and with the Seahawks undefeated, us just beating the Cowboys in the fashion that we did. It's a crucial division game. We got playmakers. They got playmakers. I think it did the job of a primetime game.

COVID is obviously the biggest story of the 2020 season. What's been the biggest adjustment you've had to make in the COVID era of the NFL?

It's definitely something that we had to get used to, but we're here to do what we love, and that's play football. Me personally, I'm a real low-key guy anyways, so as far as going out, stuff like that, it's kind of just made my job a lot easier.

It's unfortunate what's going on, but I can't wait to get the fans back and have them rocking with us.

I want to ask about your rushing style quickly. You've got the smoothest slide in the NFL, and you've been doing it since college. Was there a certain coach that helped you bring that into your game?

No. I've always been one of the smallest, if not the smallest guy on the football field. I don't think anyone on the field wants to get hit, especially at the quarterback position. So for me, being able to run, being blessed with the ability to run fast whenever I get outside the pocket, my kinda thing was, "How can I help my team when I'm on the sideline?"

That's something coaches have always taught me. So I had to protect myself, and [sliding] was one of the ways I could do that. I pride myself on being able to take care of myself and be on the field for my guys, so that's a big thing. But no, nobody ever taught me how to slide.

If you could steal a skill from any other rusher in the NFL, what would you take?