Labor leader Anthony Albanese is promising a $275 cut to electricity prices for average households within three years in a climate policy that aims to deepen cuts to greenhouse gas emissions while claiming economic gains from a surge in renewable power.

Launching an election fight over climate change and household costs, Mr Albanese outlined a $24 billion spending plan to upgrade the electricity grid and require the country’s 200 biggest emitters to achieve greater carbon cuts while offering them incentives to do so. 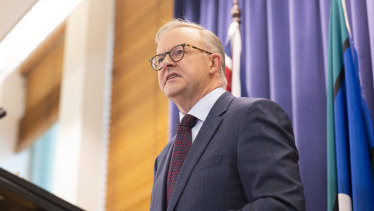 Mr Albanese set a new target to cut emissions by 43 per cent by 2030 in a pivotal decision that steps back slightly from the Labor goal of 45 per cent at the last election, sparking claims from the Greens that he is too weak and warnings from the Liberals that his plan will cost jobs.

A ferocious debate looms over Labor’s plan to toughen the obligations on the 200 big emitters, which would be done by expanding a “safeguard mechanism” already in place in Coalition policy but drew an alert from the Minerals Council of Australia about the risk of forcing the changes too quickly.

Preparing for a dispute over the costs and benefits, Mr Albanese produced modelling from economic agency RepuTex saying the Labor plan would create 604,000 direct and indirect jobs by 2030 while triggering $52 billion in private investment in power generation and infrastructure.

The policy also promises to slash up to $12,000 from the price of a $70,000 electric vehicle such as the Tesla Model 3 by waiving tariffs and fringe benefits tax, but it restricts this benefit to EVs that sell for less than the $80,000 threshold for the luxury car tax.

“This is a policy from the alternative government of Australia that is fully costed, that is worked through and that I think has got the right element of ambition,” Mr Albanese said.

“It is a modest policy. We do not pretend that it is a radical policy. It will do the right thing on the right outcomes on jobs and lowering energy prices.”

Mr Albanese prepared for a long dispute with the government over the cost of the new policy by claiming Prime Minister Scott Morrison would lie about the plan and pointing to the economic modelling to insist voters would see the benefits.

The gains are based on a $20 billion spending program called Rewiring the Nation which is meant to upgrade the electricity grid and encourage more generation from solar and wind, producing cheaper power.

RepuTex is a Melbourne consultancy led by executive director Hugh Grossman with clients over the past two decades including AGL, BHP Billiton, the Climate Change Authority, Origin Energy, Rio Tinto and government departments.

About half of the gains in the Labor plan is forecast to come from reducing emissions while another half comes from offsets such as agriculture schemes, creating a bigger offsets market for companies to trade.

A central feature of the plan is an expansion of the “safeguard mechanism” that sets emissions benchmarks for 200 big entities in resources, manufacturing and other sectors.

The government has set generous caps that do not require significant cuts from the companies in a policy framework that assumes an effective carbon price of about $24 per tonne, the same price assumed in the Labor plan.

Labor would expect deeper emission cuts from the big emitters but has not set a specific benchmark, saying instead it will take advice from the Clean Energy Regulator and will not add any companies to the mechanism.

It is also offering to redirect funding from the government’s Climate Solutions Fund to offer more incentives for companies to achieve the carbon cuts.

Minerals Council of Australia chief Tania Constable said she expected Labor to consult on the scheme, adding: “It is vital that any policy changes do not force emissions reduction faster than technology and commercial reality can deliver.” 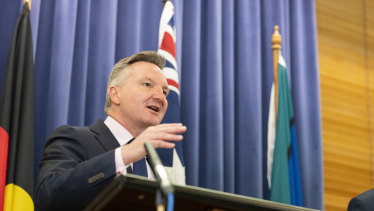 Labor climate spokesman Chris Bowen said the policy would see 82 per cent of electricity coming from renewable sources by 2030.

The government has a formal target to cut emissions by 26 to 28 per cent by 2030 from the levels of 2005 and Mr Morrison has emphasised this goal in his remarks within Australia, but the Prime Minister used his speech to the Glasgow climate summit last month to forecast a 35 per cent cut by 2030.

Greenpeace, the Climate Council, the Australian Conservation Foundation and GetUp said the Labor target was too weak but the Business Council of Australia, the Australian Industry Group and the Clean Energy Council backed the plan.

The government forecasts a fall in annual carbon emissions to 439 million tonnes in 2030 under its policies, down 30 per cent on the levels of 2005, and says the target could be 388 million tonnes, a 35 per cent fall, under its ideal scenario.

The Reputex modelling forecasts a 43 per cent fall for the combined Labor measures, taking emissions to 351 million tonnes in 2030. It says this puts Australia on a “net zero pathway” to reach the 2050 target under United Nations agreements.

But the goal requires total government spending of $24 billion over the next decade, with no figure for the outlays in later years, and assumes another $52 billion in private sector investment.

Most of the public spending would flow from off-budget agencies such as the Clean Energy Finance Corporation, funded by debt, with approximately $600 million being spent over the next four years in direct budget outlays, deepening the deficit.

Labor triggered a war of words at the last election by setting an aspirational target for electric vehicles to make up half of all new car sales by 2030, prompting Mr Morrison to claim the policy would “end the weekend” even though there was no mandate to force customers to switch.

The new policy assumes EVs would make up 89 per cent of new car sales in 2030 in response to new incentives including an electric car discount that removes import tariffs and fringe benefits tax on models that sell for less than about $80,000, the threshold for the luxury car tax.