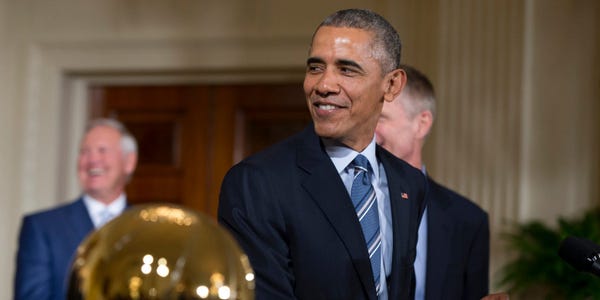 Former President Barack Obama played a big role in the NBA season resuming after players in the Disney bubble sat out of playoff games to protest the police shooting of Jacob Blake in Kenosha, Wisconsin.

The protests began on August 26, when Milwaukee Bucks players didn't take the court for a first-round matchup against the Orlando Magic. Soon after, every other remaining team sat out of games, bringing the season to an abrupt halt.

That night, the players and coaches met to vote on what to do next. The Los Angeles Lakers and LA Clippers reportedly voted to end the season and leave the bubble. The meeting broke with tension among divided players and the season in jeopardy.

While speaking to Bill Simmons on "The Bill Simmons Podcast," Lakers forward Jared Dudley said the first night, he was "70-30" that the season was going to end.

However, Dudley said a call from Obama had a huge impact on players deciding to resume.

"I think Obama's phone call to Chris Paul, [Andre] Iguodala, and LeBron [James] to seal the deal of how he would handle it, getting a leadership group together, how we were going to attack the owners. And then once we put that to bed, it was time, after talking to 'Bron after he talked to Obama, it was like, 'If Obama said it, what other better advice can we get?' …

"I said, 'There's nothing else to talk about. We're playing.'"

ESPN's Dave McMenamin reported at the time that the players had reached out to Obama for advice on what to do next. Obama encouraged the players to use the moment to come up with actionable items to help fight racial inequality, social injustice, and police brutality.

Players met with team owners and agreed to form a social justice committee, to turn arenas owned by teams into voting centers, and to use air-time during tje playoffs to encourage voting and other civic engagements.

Dudley told Simmons that initially, tensions were high and players were unsure of what to do next. James had reportedly been frustrated with the Bucks because he felt their decision to sit out of a game lacked an overall plan.

However, Dudley said that the next day, after sleeping on it, tensions had simmered and he felt more confident in resuming the season. Obama's call helped get the players back on track. In total, three days of playoff games were missed from the protests.

"Once we went in that room and we all decided to play, man, we flipped the switch so fast to be like, 'Hey, listen, this is our title to win, let's go get it.'"