Home » Lifestyle » ‘Like having a gymnast perform in your lounge room’

‘Like having a gymnast perform in your lounge room’

The Australian String Quartet’s concert in the Utzon Room against a shimmering nocturnal harbour backdrop embodied an ideal of chamber music in its intimacy, concentration and undistracted focus on the mysterious processes that complex music enacts. 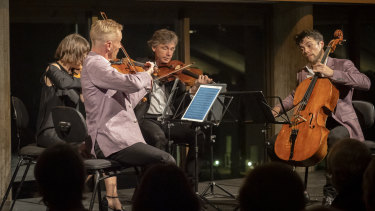 Few works better embody that complex mystery than Bartok’s String Quartet No. 3, a work that still surprises for its compact originality of ideas 94 years after it was written. Although imbued with the musical language Bartok had developed from his studies of Hungarian folk music, the work, as philosopher Theodor Adorno noted, goes far beyond folklorism and its nostalgia for Arcadian simplicity.

ASQ leader Dale Barltrop played the tonally elusive melody of the first part with thoughtfully shaped reserve as though presenting a quiet insight for discussion, the whole freely recapitulated later with greater emotional depth. In the second and fourth sections the players threw around jagged rhythms and timbres with cogently focused precision, creating a most engrossing performance.

In Mendelssohn’s String Quartet No. 1 in E flat, Opus 12 they found a more gracious and mellow form of concentration in the first movement, light charm in the second and intricate energy in the last. In these close quarters, there was a thrill in watching Barltrop play the work’s concerto-like soloistic moments – like having a gymnast perform in your lounge room.

The String Quartet No. 3, Mad Piper, by Czech-born, now English based composer Pavel Fischer introduces some of the earthy folk spirit Bartok left behind.

Its point of departure is the Scottish piper and soldier, Bill Millin, who, under order from his Scottish commander, played the bagpipes at the D-day landing.

The work has maniacal energy in its outer movement. The third movement, however, is a long sad line on the viola, played by long-standing ASQ violist Stephen King, who leaves the quartet as a player this season to direct its learning and engagement program.

The success of that program was manifest in this concert by the arrival of cellist Michael Dahlenburg, who first heard the quartet in a concert at his high school and decided that was the life for him.

The Booklist is a weekly newsletter for book lovers from books editor Jason Steger. Get it delivered every Friday.