As NASA attempts to return to the moon in 2024, the U.S. space agency has tasked Lockheed Martin and General Motors to create a new electric, autonomous lunar rover.

The rover will use GM’s autonomous driving technology and allow it to go ‘significantly farther’ than the ones the auto maker worked on during the Apollo program, some 50 years ago.

Though the rover is still in the planning stages, both companies highlighted that it is imperative it allows astronauts to traverse difficult terrains of the lunar south pole, which could hold a number of interesting discoveries, including water. 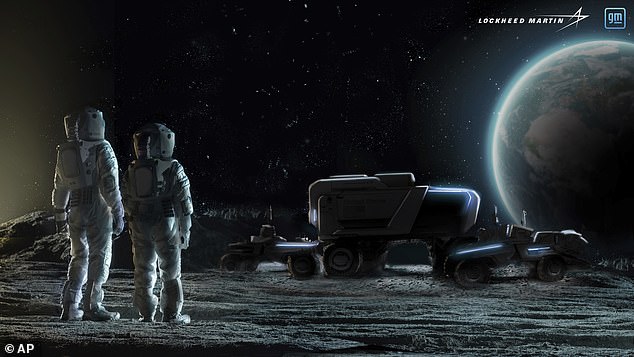 WHAT DO WE KNOW ABOUT THE LUNAR SOUTH POLE?

The lunar south pole is a site of interest for scientists and agencies planning crewed missions to the Moon.

This is because water ice has been found in shadowed areas in that region with craters that never get sunlight.

The rims of craters at the pole are exposed to near constant sunlight but the interiors are in permanent darkness, shaded from sunlight for billions of years.

The water ice and volatile deposits are found in the cold traps that are shaded from sunlight.

There have been orbital observations of the region including by NASA, India, Russia and China with the Lunar Reconnaissance Orbiter mapping the entire region to help future astronauts.

NASA plans to land the first woman and next man in the lunar south pole region as part of the first crewed landing since 1972.

They will touch down in 2024, a year after a rover lands to take samples of the water ice and scout the terrain.

‘These next-generation rovers will dramatically extend the range of astronauts as they perform high-priority science investigation on the Moon that will ultimately impact humanity’s understanding of our place in the solar system.’

Surface temperatures on the south pole of the moon can be wide-ranging.

So far, China is the only country that has put a lander on the far side of the moon.

GM’s history as a NASA contractor goes back to Apollo program, more than 50 years ago.

Not only did it work on the inertial guidance and navigation systems for the entire Apollo Moon program, but it also worked as a subcontractor for Boeing on the electric Apollo Lunar Roving Vehicle (LRV), used during the Apollo 15-17 missions.

‘General Motors made history by applying advanced technologies and engineering to support the Lunar Rover Vehicle that the Apollo 15 astronauts drove on the Moon,’ Alan Wexler, senior vice president of Innovation and Growth at General Motors, explained.

Those rovers only traveled 4.7 miles (7.6 kilometers) from the landing site, but the new rover will travel around the moon’s cold, dark south pole, with its difficult terrain.

‘Working together with Lockheed Martin and their deep-space exploration expertise, we plan to support American astronauts on the Moon once again,’ Wexler added.

The U.S. space agency sent a notice to companies earlier this year asking for a ‘human-class rover that will extend the exploration range’ for astronauts in the Artemis program. 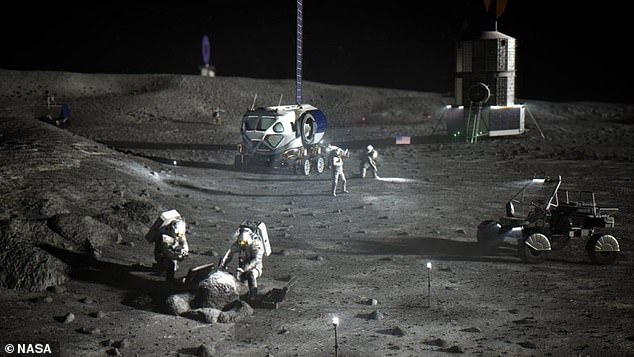 An lllustration of NASA astronauts on the lunar South Pole

The lander will have room for at least two astronauts, along 1,102 pounds worth of cargo, according to The Verge.

The news comes just days after NASA said it will send a rover to the Moon in 2023 to scout potential landing sites for a crewed Artemis mission.

It will send the $433.5 million (£306 million) rover, named VIPER, to explore the lunar south pole, where it will look for water ice and other resources that could be harvested by humans and scout the terrain for a future crewed mission.

Artemis was the twin sister of Apollo and goddess of the Moon in Greek mythology.

NASA has chosen her to personify its path back to the Moon, which will see astronauts return to the lunar surface by 2024 –  including the first woman and the next man.

Artemis 1, formerly Exploration Mission-1, is the first in a series of increasingly complex missions that will enable human exploration to the Moon and Mars.

Artemis 1 will be an uncrewed flight that will provide a foundation for human deep space exploration, and demonstrate our commitment and capability to extend human existence to the Moon and beyond.

During this flight, the spacecraft will launch on the most powerful rocket in the world and fly farther than any spacecraft built for humans has ever flown.

Artemis 1, formerly Exploration Mission-1, is the first in a series of increasingly complex missions that will enable human exploration to the Moon and Mars. This graphic explains the various stages of the mission

Orion will stay in space longer than any ship for astronauts has done without docking to a space station and return home faster and hotter than ever before.

With this first exploration mission, NASA is leading the next steps of human exploration into deep space where astronauts will build and begin testing the systems near the Moon needed for lunar surface missions and exploration to other destinations farther from Earth, including Mars.

The will take crew on a different trajectory and test Orion’s critical systems with humans aboard.

Together, Orion, SLS and the ground systems at Kennedy will be able to meet the most challenging crew and cargo mission needs in deep space.

Eventually NASA seeks to establish a sustainable human presence on the Moon by 2028 as a result of the Artemis mission.