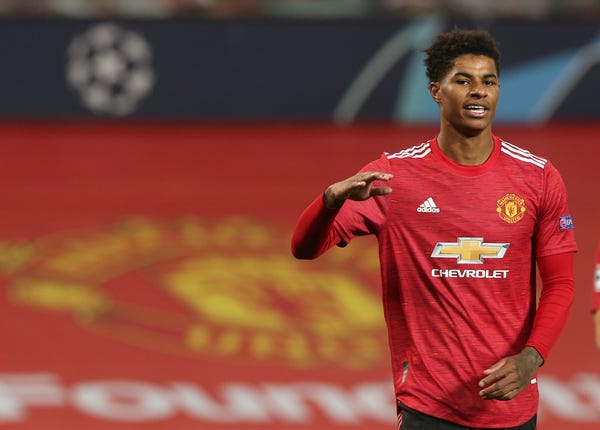 Manchester United's Marcus Rashford capped what has already been a brilliant week off the field by scoring a sublime Champions League hat-trick in a 5-0 win against RB Leipzig on Wednesday.

The 22-year-old is leading a campaign to overturn the UK government's decision not to provide impoverished children with free meals during the school holidays, with his petition having reached over one million signatures earlier in the day.

Against Leipzig, Rashford came on as a 63rd minute substitute and opened his account just 11 minutes later, slotting home into the bottom corner to double United's lead after Mason Greenwood's first half strike.

Rashford scored again in the 74th minute, before turning down the chance to complete his hat-trick from the penalty spot, instead allowing Anthony Martial, who had won the spot kick, to step up and score.

Martial repaid the favour in stoppage time however, finding Rashford unmarked in the box, with the England international firing home for his third of the night.

Marcus Rashford once told a teammate he'd help give back to society if he ever could. Now he's leading an extraordinary campaign raising millions to fight child poverty.

I went to a non-league soccer game instead of paying $20 to watch the English Premier League on pay-per-view. Here's why it was one of the best days out I've had in 2020.

Europe's biggest soccer teams are in talks to form a $6 billion super league which would totally reshape the sport, according to reports