Mariah Carey is setting the record straight about the rumored ‘explosive’ fight with Jay-Z that allegedly made her leave Roc Nation. See her tweet on the report.

News broke on June 6th that pop icon Mariah Carey was leaving Jay-Z‘s management company, Roc Nation, after the two got into a “blazing row” about the future of her career. After multiple reports about a rift between the two music legends, Mariah took to Twitter, herself, to clear up rumors. “The only “explosive” situation I’d ever “get into” with Hov is a creative tangent, such as our #1 song “Heartbreaker”!” Mimi blasted. “To the people who make up these lies I say “Poof! —Vamoose, sonofa*****”!” She added a clip from the music video from the ’99 hit and fans went wild.

“I know that’s right! You better let them know!” one Twitter fan hyped up the diva. “This is why I love you,” another gushed. Mariah’s tweet comes after 24 hours of speculation about what went down between Mariah & Jay-Z. “Mariah and Jay had an explosive meeting which did not go well at all. She has made it clear she wants nothing more to do with him and has called it quits with Roc Nation,” a source told The Sun, which first reported the situation. “It is a shame because they had done some great work in the last few years. But this meeting couldn’t have gone much worse.” 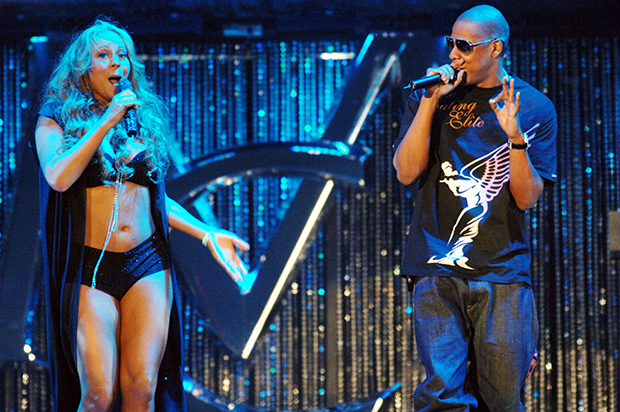 The “Obsessed” singer first joined Roc Nation in 2017 after she fired her former manager Stella Bulochnikov, which prompted lawsuits on both sides. The insider added, “Mariah has been talking to other managers and thinks she has found someone who she feels has full belief in her as she takes her next steps.” She is reportedly working on a “heavily R&B-influenced album” and another world tour set for 2021. While Jay-Z has yet to comment on the multiple reports of a feud, Mariah has already been removed from the Roc Nation website’s list of acts.