You try but cannot find the right word to describe the magnitude of the event.

It is seismic, it is historic, it’s the most extraordinary spifflication.

He has reduced the Liberal Party to a non-entity. 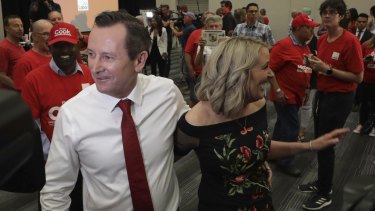 Mark McGowan with his wife Sarah after his record-breaking win.Credit:Hamish Hastie

From its charred ruins the shell-shocked survivors wonder where to begin the rebuild.

Mia Davies is in all likelihood the Leader of the Opposition.

A narrow, rural interests party now must lead the way to make our democracy work.

Might the Nationals run in the city in 2025? Anything seems possible.

COVID is clearly the dominant factor but as Notre Dame political scientist Dr Martin Drum pointed out during our 6PR election broadcast, this is the fourth state or territory election run and won by the incumbent since the pandemic. None resembled an obliteration of this scale.

It is impossible to imagine less favourable headwinds for the Liberal Party, but they made the very worst of a bad situation.

Mark McGowan’s Labor Party is the most finely oiled of political machines.

It is meticulously professional, totally intolerant of internal indiscipline, and ruthless in its messaging. 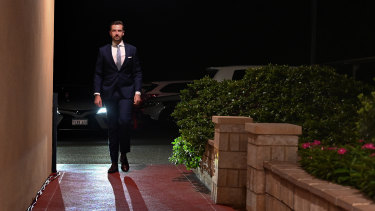 But the key insight is McGowan’s: he governs from the centre.

“We must govern for all West Australians,” he said “Being a part of the mainstream is crucial for success.”

He promised to continue to run a stable, competent, responsible and caring government.

Mr McGowan has been working at this for more than two decades.

The New South Welshman by birth has absorbed and unlocked the West Australian psyche like few politicians before him.

In a time of extreme uncertainty he became the protector in chief.

And he has been locked, laser focused, on the insight that economic success is the foundation of political success.

On the run into the 2017 election he waved his plan for jobs at every opportunity.

After a decade of doldrums, the economic tailwinds at the Government’s back have been extraordinary.

Iron ore at $170 a tonne, house prices finally rising, and money circulating through the economy that would ordinarily be spent overseas or interstate due to closed borders.

West Australians finally feel good about their circumstances, and when you layer over the sunshine and the lifestyle compared to the European and American deaths and lockdowns, what other choice is there?

Mr McGowan’s most unappreciated political skill is keeping Labor’s factions – particularly its left which is dominant in the party organisation – in line.

That Labor effectively has no policy on climate, for example, is of no consequence. There is not even a murmur of dissent.

Now Mr McGowan rules supreme: it is his party.

The exact make up of the new Liberal Party room will be determined over the coming days, but it could yet be a tandem bicycle.

Libby Mettam in Vasse is a worker but David Honey in Cottesloe, Sean L’Estrange in Churchlands, Bill Marmion in Nedlands and Tony Krstcevic in Carine have proved themselves duds. 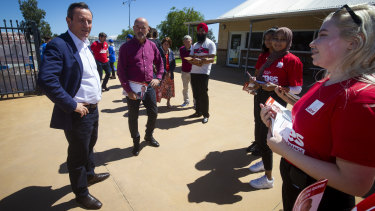 The result was even better than expected for Labor.Credit:Matt Jelonek/Getty Images)

Zak Kirkup could have been a cornerstone for a new Liberal era but was a lamb to the slaughter and will exit the stage.

The Liberals must urgently find a counterveiling force to Nick Goiran, whose evangelical candidates alienate that mainstream Mr McGowan has made his own.

Most of all, the Liberals must figure out what they stand for and how they can help ease the burden on and solve the problems of the working families of the WA suburbs and towns.

There must be a feeling of dread spreading across the Nullarbor and towards Scott Morrison in Canberra.