This is as dystopian a vision of the future as any British Prime Minister has offered the public since the Cold War. In Boris Johnson’s dark new world of international relations, the 2020s will see the breaking down of rules-based world order, the proliferation of weapons of mass destruction and, more than likely, a successful chemical or nuclear attack by terrorists.

And that is before we get to the apocalyptic double whammy contained in the Government’s landmark review of defence, security and foreign policy – the shock pledge to increase Britain’s stockpile of nuclear weapons by 40 per cent followed by a broadening of the scenarios in which the UK would consider using these very expensive missiles.

The Government’s view is that in the decade ahead conventional threats and weapons will pass into obsolescence. This may explain why the British Army is to lose thousands of soldiers – perhaps as many as 10,000 – while the RAF and Navy will lose frontline aircraft and ships.

They will be replaced eventually by high-tech alternatives – drones, for example, instead of minehunters and submarine-hunting frigates – most of which come with a huge price tag for Armed Forces so indebted they could effectively be declared bankrupt. 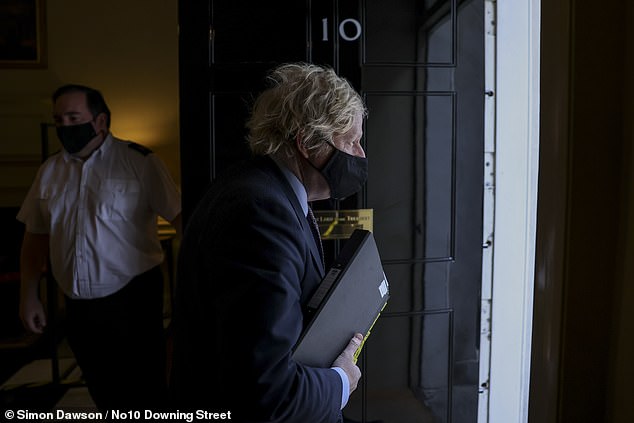 Prime Minister Boris Johnson leaves to give his Integrated Review statement in the Houses of Parliament from 10 Downing Street, Tuesday

Who needs infantry battalions when we’re prepared to increase the size of our nuclear armoury? That at least seems to the logic behind the PM’s ‘nuclear or bust’ approach.

My fear is that his dramatic move could make people less safe. Because the reduction in the scale and capability of the UK’s conventional military options may restrict our ability to intervene effectively in any international conflict. The review makes clear the past decade has seen an increase in conflict globally and the years 2016 and 2019 witnessed the highest number of active armed conflicts internationally since 1946.

The majority of these were civil wars – the sorts which call not for nuclear capability but back-to-basics soldiering in hot, dusty climates if the UK wants to bring any influence to bear on the ground. And while Boris says he wants to revolutionise warfare with investment in ‘artificial intelligence’ and ‘directed energy weapons’, the review concedes our enemies do not need to spend fortunes on shiny, computerised kit to be effective. It says: ‘The advantages offered by high-tech capabilities may be eroded by affordable, easily-available, low-tech threats such as drones and improvised explosive devices.’

Any UK soldier who served in Afghanistan could have reminded the Prime Minister that the British Army lost more than 100 lives and countless more wounded to basic Taliban roadside bombs. 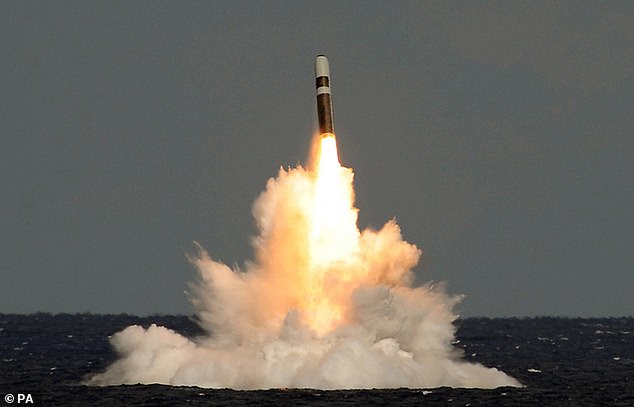 As for the escalation in nuclear capability, nobody predicted such a dramatic shift of emphasis. The UK was one of the first signatories to the nuclear non-proliferation treaty in the 1960s and in recent years had abided by a capability ceiling of 180 warheads. Raising the total to 260 undoubtedly sends a strong message to US President Joe Biden that Britain remains committed to global security and perhaps strengthens the UK’s position as a permanent member of the UN Security Council.

But it also sends a clear signal to Russian leader Vladimir Putin that the era of disarmament in the West is over and could possibly trigger a new nuclear arms race.

Equally, Iran will now surely redouble its efforts to acquire nuclear weapons capability. One of the most dramatic proposals concerns the use of the new nuclear weapons. Previously the UK’s position was that it would only use them against another nuclear power. Now Britain reserves the right to review this position and engage non-nuclear states ‘if the future threat of weapons of mass destruction, such as chemical and biological capabilities or emerging technologies that could have a comparable impact, makes it necessary’. 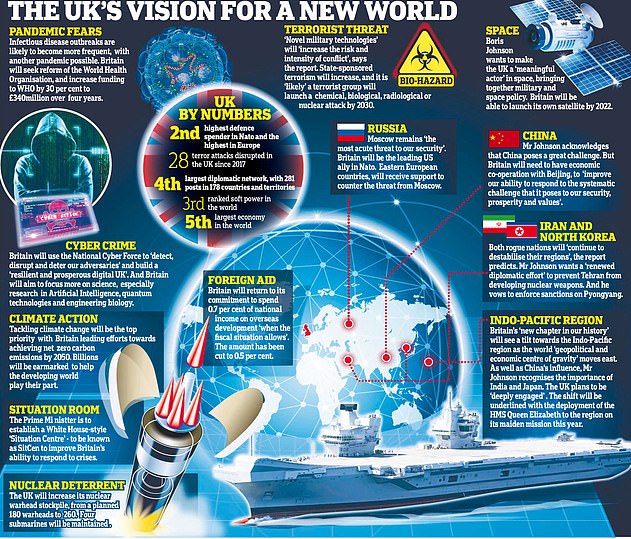 These are not small bombs. While the UK’s nuclear arsenal will remain tiny compared to Russia and the US – with an estimated 4,300 and 3,800 warheads respectively – each bomb will be around seven times as powerful as the atomic device dropped on Hiroshima in 1945.

And yet despite the bellicose content of the Government’s plans, there was widespread confusion and despair yesterday among defence-minded MPs over ministers’ hesitant approach to China and the failure to identify the country as a hostile state.

The description ‘systemic competitor’ smacked of not wishing to offend the Chinese and was in stark contrast to the rhetoric towards Russia, which is singled out as posing ‘the most acute threat to our security’.

Remarkably, there was scant mention of China’s vast and rapidly expanding naval and air forces, its unilateral territorial expansions or its occupation of island chains in international waters. The undeniable reality is that the strategic balance of global security and influence has shifted, if not entirely from Nato countries towards China, then much of the way there.

China’s influence is undoubtedly malevolent. Yet Britain’s defence review for 2020 to 2030 declines to declare China an enemy.

The PM’s claim yesterday that Britain had ‘led the international community’ in expressing concern over China’s human rights abuses had a deeply hollow ring.

Shock plans to increase the country’s nuclear warheads by 40 per cent were met with fury last night amid fears it could spark an international arms race.

In a pledge which overshadowed the release of the UK’s landmark defence, foreign policy and security review, Boris Johnson said he would raise the number of Trident nuclear missiles from 180 to 260.

The remarkable move comes more than 50 years after the signing of the nuclear non-proliferation treaty in which the Government committed to gradual nuclear disarmament.

In another controversial policy shift, the Integrated Review revealed that the UK could consider deploying its nuclear arsenal against non-nuclear countries if they possess equivalent weapons of mass destruction – which would include new ‘emerging technologies’.

And while the document states that the UK will not fire or threaten to use its missiles at a non-nuclear state, it also says that this could be reviewed in future so as to maintain the deterrent effect against potential adversaries.

He added: ‘I have written to the Ministry of Defence seeking an explanation as to whether [the plan] is in response to an increased nuclear threat.

‘We also need clarity on how the Government is blurring the lines in what constitutes a justified retaliation.’

Caroline Lucas, co-leader of the Green Party, said: ‘The Prime Minister set out that the climate crisis was his number-one priority then spent billions on more nuclear warheads…

‘They won’t protect us from the climate emergency but will fuel a nuclear arms race.’

However, last night, Downing Street insisted that the 260 number was only a ‘ceiling’ not a ‘target’.

A spokesman added: ‘We believe the best way to protect ourselves and our Nato allies is to ensure that we continue to have a credible independent nuclear deterrent.’