Australians could see a surge in vaccinations in the final quarter of this year in a federal plan to set up massive sites capable of inoculating thousands of people each day, holding out the promise of protecting the population by Christmas.

Prime Minister Scott Morrison revealed the plan in a speech that admitted to problems in the vaccine rollout while airing hopes for new agreements with the states at a national cabinet meeting on Monday. 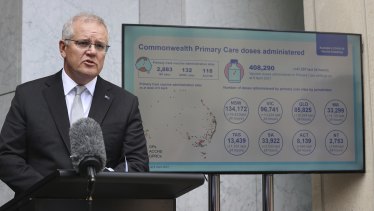 Prime Minister Scott Morrison admitted to problems in the vaccine rollout while airing hopes for new agreements with the states.Credit:Alex Ellinghausen

“Our task now is to work with the states and territories to find the best method for mass vaccination to be achieved in that fourth quarter, or earlier if those doses become available sooner,” Mr Morrison said.

“But that will depend heavily on whether the states’ mass vaccination programs can achieve that in about a 12-week period, and that will be a big task, and that’s why I haven’t committed to a timetable.

“We need to work that up with the states and territories.”

Mr Morrison moved last Sunday to abandon the government’s original target of giving a first dose to all adult Australians by October, arguing it is not possible to set a new target because of the uncertainties over global vaccine supplies.

In a speech on Wednesday, however, he aired the ambition to vaccinate all Australians by the end of the year as long as the country gets vaccine imports promised by Pfizer and local vaccines produced by CSL under an alliance with AstraZeneca.

Only 1.3 million doses have been given so far, well below the target of four million set for the end of March in the government’s forecasts before the European Union stymied the shipment of millions of AstraZeneca doses.

Mr Morrison used his speech to the Chamber of Commerce and Industry in Western Australia to defend the government’s economic response to the pandemic while setting the agenda for an urgent national cabinet meeting scheduled for Monday.

Victorian Acting Premier James Merlino has backed the use of mass vaccination sites, such as at the Melbourne Showgrounds, and NSW Premier Gladys Berejiklian is planning similar sites.

But the approach raises questions about costs because the states carry the burden of the mass vaccination sites through their hospital systems, while the federal government pays for vaccines given by general practitioners.

The vaccines are estimated to cost the federal government about $7 billion but the national cabinet meeting is likely to canvass funding for the delivery, including for the mass vaccination sites.

Mr Morrison stood by plans to vaccinate the two priority groups – 678,000 in Phase 1a and 6.2 million people in Phase 1b – by the end of the year. The first phase includes quarantine workers, health workers and aged care residents and staff. Phase 1b includes all Australians aged over 70.

“Our immediate priority remains the vaccination of our most vulnerable in those phases 1a and 1b and we should be able to complete this by mid-year as planned and using existing supplies of AstraZeneca because they are over the age of 50 in most cases, and the Pfizer vaccines we have available for that task,” Mr Morrison said.