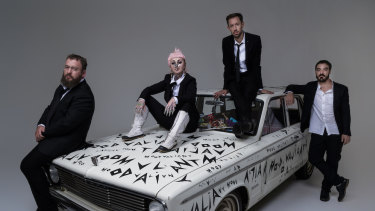 Six years after stunning the world with their debut album, Hiatus Kaiyote returns, now gilded with horns and strings.Credit:Tre Koch.

When 2015’s Choose Your Weapon propelled this Melbourne four-piece into the sights of music’s elite (they’ve now been sampled by Beyonce, Kendrick Lamar, Chance the Rapper and Drake, to name a few), it was their talent for combining both the laidback and infuriatingly complex parts of jazz that set them apart. Six years later Hiatus Kaiyote are sounding ever more masterful in their ability to weave together intricate, funk-riddled, R&B-tinged jazz – but this time there’s a darker edge.

Perhaps this has been fuelled in part by lead vocalist Naomi ‘Nai Palm’ Saalfield’s cancer diagnosis, right before the band were due to lay down vocal tracks in late 2018. Thankfully both Saalfield and Mood Valiant emerged victorious from the ordeal; the latter filled with a wholehearted earnestness and a laser-focused direction.

As the ethereal Sip Into Something Soft shimmers into view with its heady cloud of vocal harmonies and edgy house-infused beats, it’s impossible not to be instantly transported by the band’s melt-in-your-mouth cool. Saalfield’s powerhouse vocals purr and stretch around every conversational melody line, permeating the record with her unmistakable soulful timbre.

Lead single Chivalry Is Not Dead gyrates with infectious polyrhythms and is filled with yearning “what ifs” that culminate in a cathartic howl. Beneath it all lies the complex interplay between Paul Bender’s bass inventions and the meter-bending Perrin Moss on drums. Together, they make the harmonies dance around unexpected accents and beat drops that feel as unconventional as they are instinctive for this band. Later, keys player Simon Mavin takes centre stage with Saalfield on the starkly vulnerable and cello-infused ballad Stone or Lavender. The tenderness doesn’t last for long. The darkly seductive Red Room sounds as rawly intimate as the studio improvisation that birthed it, while the title of All the Words We Don’t Say is spat relentlessly from Saalfield’s lips.

The biggest new addition on this record is the inclusion of horns and a string section from Brazilian arranger Arthur Verocai. “We had recorded the song Get Sun, and it already sounded good,” says Bender. “We had no idea what he had written for it. When Verocai fired up his horn and string sections, it was a release for everyone. Tears were running down my face.” It’s a master stroke that brings a golden-era movie vibe to album-opener Flight of the Tigerlily, and elevates Get Sun to a Latin American-infused nostalgic funk high.

Hiatus Kaiyote will perform at the Enmore Theatre, Sydney, on October 2. Jessie Cunniffe

None of us got out of 2020 unscarred, and some of us haven’t been able to find a steady path even as things returned to some simulacrum of normal. After only a few tracks, maybe not even that long, you’ll figure that MC Taylor’s Hiss Golden Messenger has arrived as the audio equivalent of an arm thrown around your shoulder just when you needed it.

Bringing a blend of at-ease country, late-night soul and end-of-the-cabaret balladry, Quietly Blowing It goes semi-gently into the not-so-good night, whether via pedal steel and organ, or quietly spoken drums and Taylor’s deceptively conversational (but actually cultured) tenor. This isn’t just about comfort, however, it’s also about self-awareness and self-criticism. It’s about moving on, or at least preparing to.

The languorous title track, which feels like an island resort band trying on Randy Newman, recognises mistakes made. The cheerily choogling The Great Mystifier points out that bending and not letting pride stand in the way can change so much. Even in Painting Houses, a torch song wrapped inside a Kris Kristofferson mourning-after track, hope is still a consideration. The album ends by asking us, “Do you want sanctuary?” And it’s not an idle question. Bernard Zuel

Like every album by the great John Grant, who counts among the most original pop artists of the last decade, his latest one is a work of compelling dualities. Boy from Michigan balances intense emotional angst with withering wit; anthemic and melodic indie-folk with abrasive synth-pop; and intimately personal narratives with caustic social comment. It also has a similar structure to his previous opus, Love is Magic, in that the first half is dominated by melody and accessibility (the gorgeous County Fair has one of the great John Grant choruses), before things get weirder and more experimental later on.

The warped electronica of Your Portfolio and The Only Baby, both Trump-baiting triumphs, are Grant at his acerbic best. As its title suggests, and as is usual with Grant, the album also mines his tumultuous past for poetic depth. For example the outstanding piano-led ballad, The Cruise Room, addresses his disorientation in early adulthood as he confronted his sexuality. In sound and subject matter, there is little to distinguish Boy from Michigan from his previous few albums, but that is fine: the songs are still delicious, and the satire is still ferocious. Barnaby Smith

Occasionally you visit someone’s place for the first time and feel instantly at home. Whether it’s the colours and shapes or the books and lights, you are at ease and pleased to be there. This music is like that.

It arrives with a geniality that makes you settle deeper in your chair and, sure enough, many of the 19 pieces penned by Melbourne guitarist John Scurry (across a double album) become old friends at first hearing. Partly this is because the music is rooted in the familiarity of pre-bebop jazz, but much more is in play than just a fine mist of nostalgia.

The melodies can be hugely engaging, as can the arrangements (for an octet, including fizzing horn parts by Eugene Ball for his own trumpet, Brennan Hamilton-Smith’s clarinet, Stephen Grant’s alto and James Macaulay’s trombone), while the solos are apt and smile-inducing.

Scurry’s playing is masterfully understated, epitomised by his work behind the clarinet and trumpet on the evocative Egyptian Violet. Often he is merely adding breadth (but no weight) to Howard Cairns’ bass, while drummer Danny Fischer frequently uses mallets to thicken a mood, and the band is completed by pianists Matt Boden or Sam Keevers. John Shand