Meadow Walker has reached a big milestone in her modeling career.

The model — who is the daughter of the late Paul Walker — took to Instagram on Monday to reveal that she had landed her first Vogue cover, posting a photo of herself on the cover of Vogue Korea. In the beautiful shot, Meadow can be seen posing in a gorgeous white Grecian-style dress with a gold belt. The 22-year-old described covering the magazine as a “dream come true.”

“MY FIRST VOGUE COVER!! @voguekorea Thank you so much to the amazing team <3,” Meadow captioned the pic. “A dream come true.”

“🙌 Yes Meadow! ❤️” the Paul Walker Foundation’s Instagram account commented. Meadow is the founder and president of the foundation. 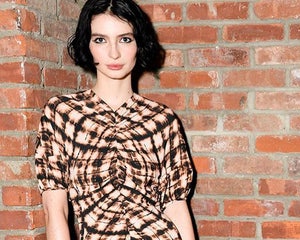 Paul Walker's Daughter Meadow Reveals She Had a Tumor

Meadow started her modeling career in 2017 and is currently signed with DNA models. And it’s safe to say her career is successful so far. Just last month, Meadow walked in the Givenchy Spring/Summer 2022 runway show, had a spread in AnOther Magazine’s Autumn/Winter 2021 issue and appeared in Zara’s campaign for their Fall/Winter 2021 studio collection.

But it’s just not her career that’s booming. Meadow’s recently experienced a major moment in her personal life: she got married to Louis Thornton-Allan!

Meadow announced the exciting news of her nuptials on Instagram on October 22, sharing several posts from the beachside ceremony, including a sweet black-and-white video that featured a montage of clips from the wedding. “we’re married !!!!” Meadow captioned the post at the time. According to PEOPLE, the ceremony took place in the Dominican Republic earlier that month.

As shown in Meadow’s Instagram posts, among those who attended the wedding were her late father’s “Fast & Furious” co-stars Jordana Brewster and Vin Diesel, who walked Meadow down the aisle. (Paul Walker passed away at the age of 40 following a car accident in November 2013. Meadow was 15 at the time.)

Meanwhile, last week, Meadow spoke out about a secret health battle, revealing on Instagram that she had a tumor removed. She posted a photo of herself from two years ago, with the image appearing to have been taken at a medical center. “2 years ago today. I’ve come a very long way,” Meadow captioned the post, below. “Bye bye tumor. Blessed & grateful.”