‘Death is delivered with bullets, saws and machetes’: Legendary wildlife filmmakers and photographers Beverly and Dereck Joubert share stunning images as they fight to stop poaching

‘Death is generally delivered in low-tech mechanics, and sadly that is brutal. Bullets, saws, machetes. Your imagination can fill in the horrors.’

Legendary wildlife filmmakers and photographers Beverly and Dereck Joubert, both National Geographic explorers-in-residence who have specialised in African photography and filmmaking for around 35 years, are telling MailOnline Travel about the chilling reality of the poaching industry.

They continue: ‘The addition of some helicopters into South African rhino poaching ventures into the higher-tech but generally poaching is like a steady march of army ants – deadly and never-ending, with techniques that don’t evolve much. Cell phones have changed their ability to communicate, so that is another “advancement” of tech for poaching.’

Tense: A fierce lioness on the prowl in Botswana, with the herd of buffalo she’s stalking standing its ground

Poaching has been part of humankind’s assault on the animal kingdom and the pair reveal that in the 35 or so years they’ve been filming and photographing it, they’ve seen a huge decline in numbers.

Despite the devastating trend, the couple says there is hope thanks to society becoming more environmentally conscious.

‘There has been a massive awareness change, increasing the chances of finding, naming and shaming criminals as well,’ they add. 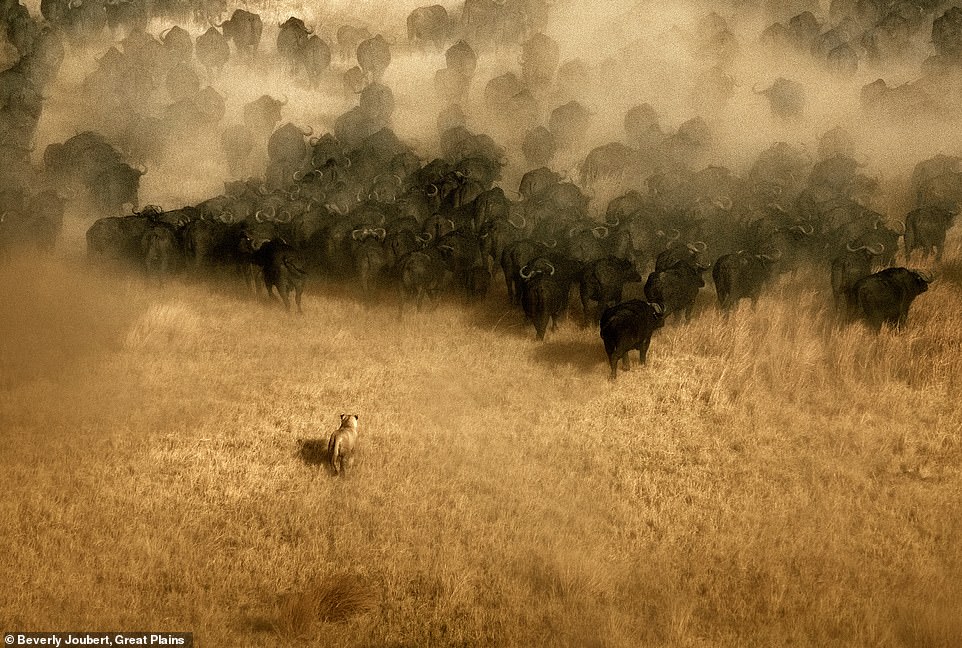 The lioness in Botswana confronts the herd of buffalo – one of the most dangerous animals on the African continent. The Jouberts experienced their power and aggression first-hand in an encounter in March 2017 in Botswana’s Okavango Delta they were fortunate to survive

To help underscore just what it is we’re losing, the pair have shared some of their most stunning pictures.

Two adorable photos show a female cheetah and her fuzzy-haired cub surveying the landscape amid long grass for potential threats and food, other images capture the majesty of a male lion, one shot focusing on its regal mane, another underscoring its agility as it leaps over a body of water.

Here we also present a striking black-and-white photo of elephants making their way across the African savanna below looming dark clouds. 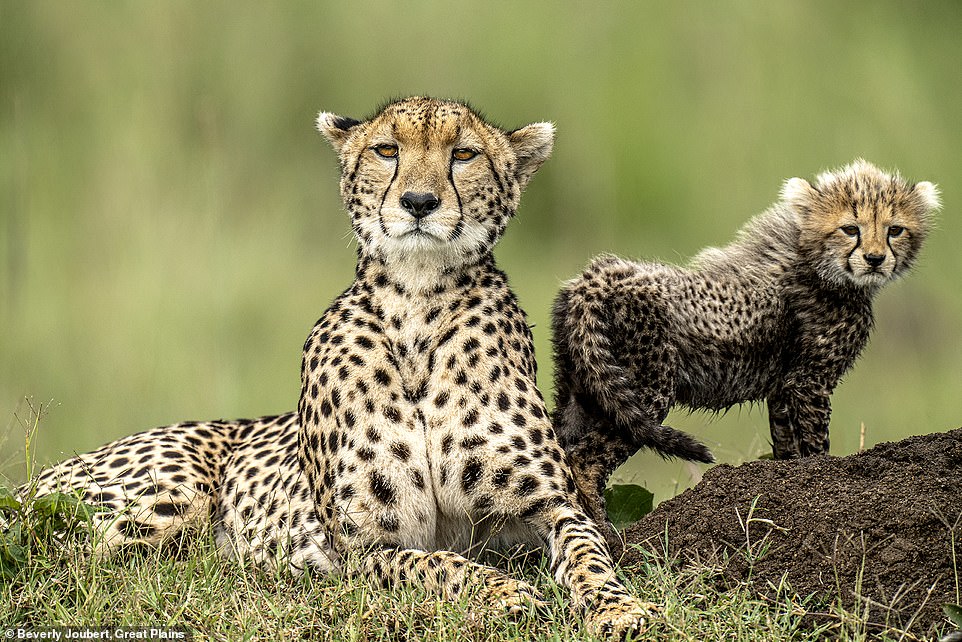 A mesmerising picture taken in Kenya of a mother cheetah and her cub, surveying the landscape for potential food – and threats

The Jouberts have campaigned fiercely over the years for the protection of elephants, and they were dismayed at the Botswana government’s decision in 2019 to lift its five-year suspension of elephant hunting.

This April, the southern African country offered permits for the shooting of 287 elephants in a bid to reignite the hunting industry in the wake of the Covid-19 pandemic.

The Jouberts say that it’s an ‘urban myth’ that the pandemic, with fewer tourists around, has been good for nature.

The collapse of the tourism industry, combined with Covid-19 restrictions and illness, has left many parts of Africa short of rangers.

They explain: ‘During this time, poaching has increased radically. Criminals don’t follow curfew suggestions! We are seeing massive poaching across Africa.’ 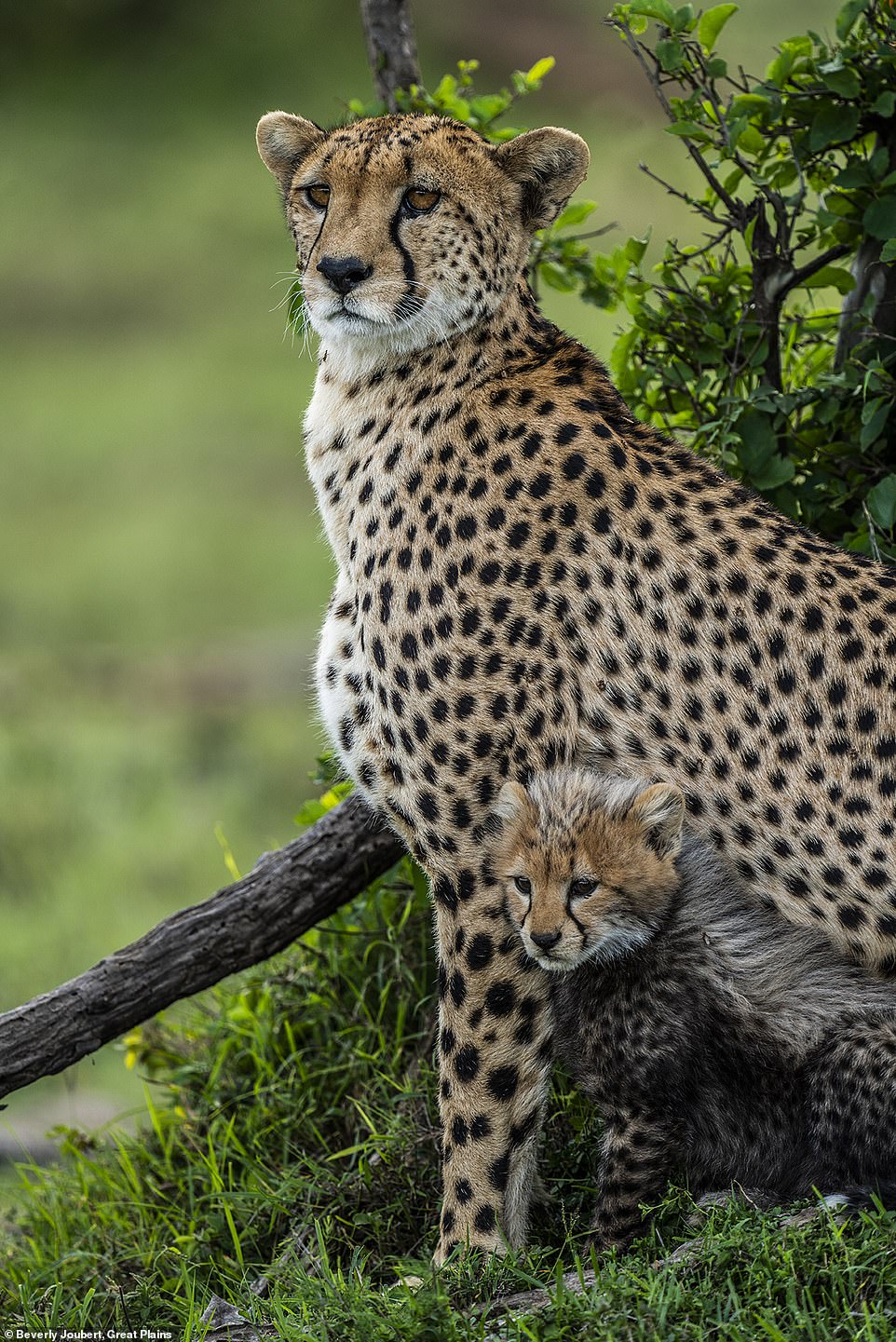 In a bid to help the situation, the Jouberts, who also run an anti-rhino-poaching initiative via their Great Plains Foundation, started a new initiative called Project Ranger, to help fund laid-off rangers.

Beverly, 64, says: ‘It costs $500 per month to support one ranger, and we need to keep them in the field protecting wildlife. So, our lives have shifted to running this initiative and raising money for rangers during this time.’

To date, Project Ranger has funded more than 200 rangers in seven countries.

The other images shared by the Jouberts show a fierce-looking lioness prowling around a large herd of buffalo. 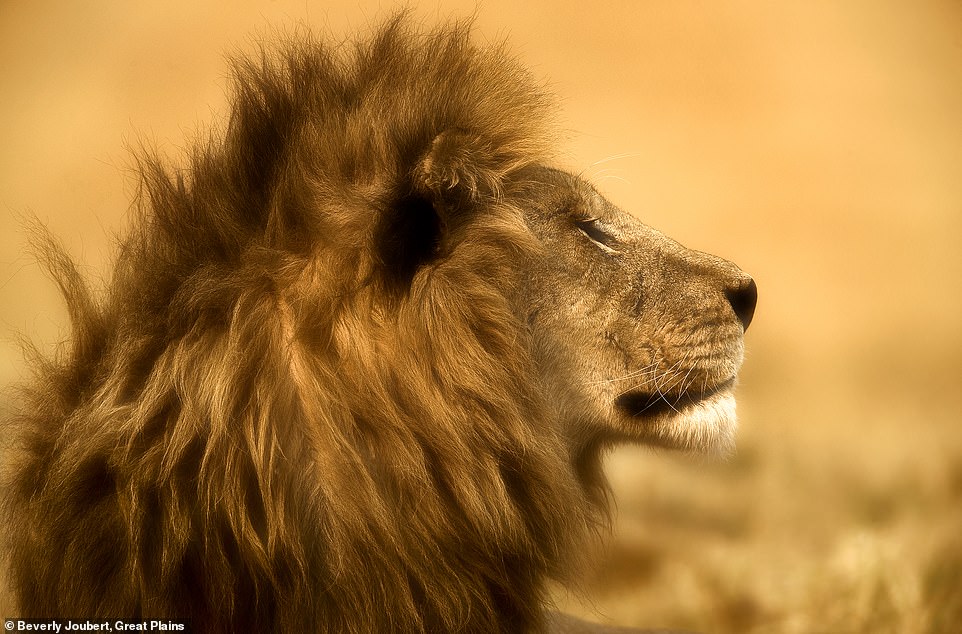 Mane attraction: A magnificent picture from the Beverly Joubert portfolio of a male lion in Botswana

Buffalo is considered one of the most dangerous animals in Africa, a species hunters are particularly wary of. It is estimated that they kill around 200 people every year.

The Jouberts experienced their power and aggression first-hand in an encounter in March 2017 in Botswana’s Okavango Delta they were fortunate to survive.

They were out in the field when suddenly a buffalo rammed Dereck and then impaled Beverly under her arm a second later.

The puncture wound was horrific, with the horn ripping through Beverly’s collar bone, throat, the back of her mouth and into her cheek. The couple were also left with multiple fractures. 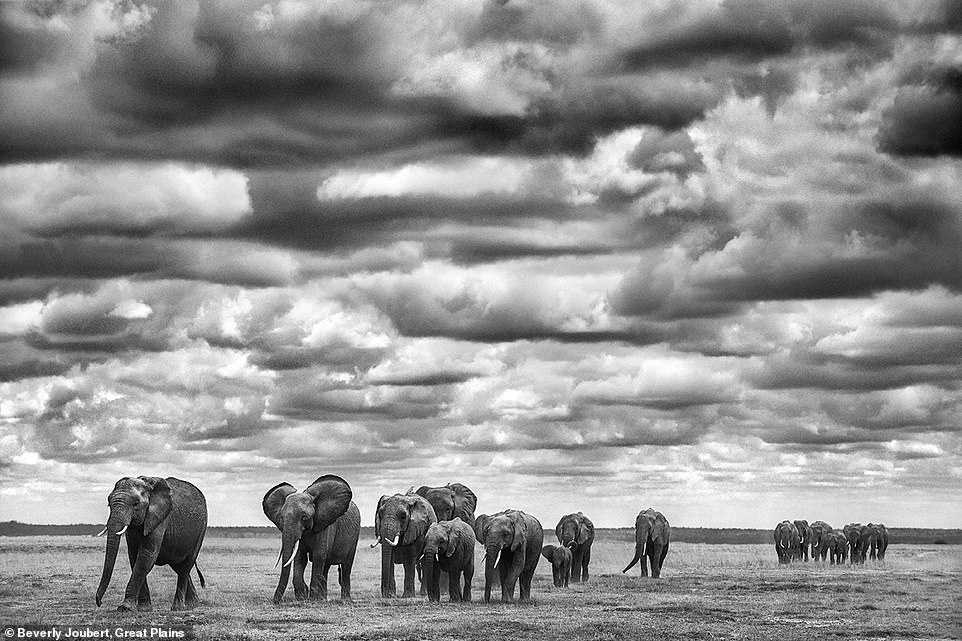 The Jouberts have campaigned fiercely over the years for the protection of elephants, and they were dismayed at the Botswana government’s decision in 2019 to lift its five-year suspension of elephant hunting. This picture was taken in Botswana near the Selinda Camp

1. Learn the rules of photography so you can break them.

2. Think in thirds. The golden rectangle is the perfect shape and lends itself to dividing the frame into thirds.

3. Tell a story in the frame. What is going to happen next? What just happened to get us here?

4. Wobbly is sloppy. Use a tripod to be steady.

5. The eyes have it… get the image of that ‘look’ so we can see into the eyes.

7. Take time to look behind you. Sure it’s a good idea to know if a lion is creeping up on you while you are photographing a sunset, but it’s also good to look at the light the opposite way to what is obvious, especially if you are in a group where all cameras are aimed in one direction. Sometimes the great moments are with the soft pink front light, not just the silhouette.

8. Tech check before shooting. You really want to make sure your gear all works, the settings are right, batteries are charged, data cards are formatted. You don’t want to be doing that stuff while the lions are leaping onto a buffalo.

9. Keep both eyes on the bull. If you shoot with two eyes open you can watch what is happening outside of the frame you have selected, and quickly change the frame if it is better. If a buffalo bull is charging at the lions, or there’s an impala underneath a leopard in a tree. Be aware.

10. Be your own ethics police. Mostly, nature photographers are out alone, away from anyone who can see or catch them if they chase an animal or grab it, cage it, throw a stone at it, whistle at it… so we have become the most critical of our own ethics that anyone could be. We film and work as if on a stage in front of 30,000 witnesses, silent witnesses. That is our authenticity.

Dereck recalls: ‘Between Beverly and me, we had 30 broken bones, although she sustained 22 of those! She died in my arms twice.’

After spending a night in the dark trying to keep his wife alive, help eventually arrived and the couple were taken to the nearest hospital.

Dereck asked for the buffalo to be darted and transferred away from the camp where they were staying, as he does not believe in punishing wildlife, but unfortunately, it died during the process due to complications from another wound.

It took the couple around nine months to recover from their injuries and get back to doing what they love most.

Dereck, now aged 65, thanks his brother for inspiring him to pursue a career as a cameraman.

The outdoorsman reveals: ‘My brother was an emerging wildlife artist and suggested that there was only room for one artist in our family, so he gave me a camera as a distraction.

‘Then one day, when we joined the Chobe Lion Research Institute to study lions, I found a moving camera in an old cabinet with a manual. I loaded it and went out and started filming.

Beverly says her interest in photography also started from a young age, but wildlife wasn’t the primary subject – she was the ‘designated family photographer’.

Later in life, after she met Dereck, she started experimenting with his photography equipment following his transition into cinematography.

She chuckles: ‘Now, if he wants to use a still camera, he has to wrestle it out of my hands!’

Over the years, the Jouberts, who are both native South Africans and met at high school, have made more than 25 films for National Geographic and published more than a dozen books and multiple scientific papers.

When it comes to their favourite wildlife to capture, the Jouberts say that ‘any day with big cats is spectacular’, with leopards providing ‘an amazing variety of habitat, hunting styles, fast-paced movement and yet regal repose’.

Asked about their most magical wildlife encounters, the ardent conservationists detail a recent encounter that occurred while they were working on their Jade Eyed Leopard documentary for National Geographic Wild, which aired this February.

They say: ‘Toto, the main character, suddenly tired of chasing warthogs and squirrels and saw our vehicle, wandered over and lay in the shade. [She] looked up into our eyes, with her jade eyes, and won our hearts… again.’

Birds are another favourite subject matter for the Jouberts.

Beverly says that African skimmers are an incredible specimen and that it’s fascinating to watch them ‘flying fast with their bottom beaks skimming the water for fish’.

‘It’s madness and I’m surprised they have evolved or survived,’ she muses.

For those wanting to follow in the Jouberts’ footsteps as wildlife photographers, Beverly says that having passion and drive are essential qualities.

She concludes, before heading out for a day in the wilds: ‘There is no work worth doing unless it is a passion. Why bother?

‘I think we are now in an era of “passion deficit”, where people just don’t care very much about much. But we would certainly recommend wildlife photography and cinematography if you want to live a full life, not one that starts after office hours.’

Visit beverlyjoubert.com to see more of her photography and to purchase prints.