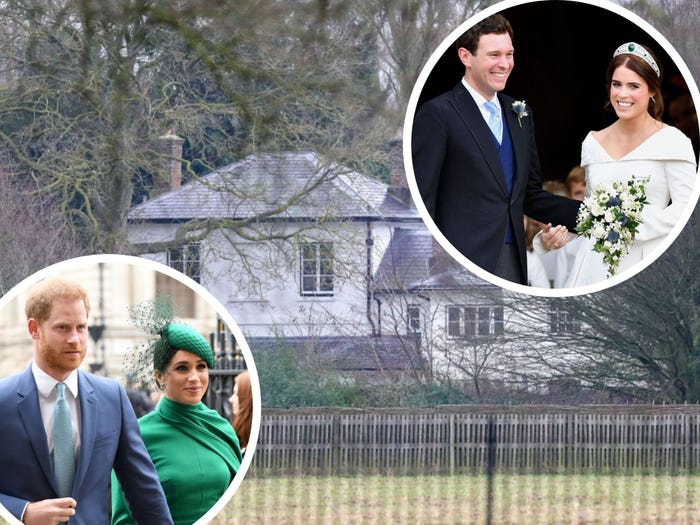 Since stepping down from their official duties as working senior members of the royal family, Prince Harry and Meghan Markle have marked their new chapter of life by buying their first home together in Santa Barbara, which is where they've been residing with their son, Archie, since June.

As part of their journey to financial independence, Harry and Markle reportedly paid back the $3 million in taxpayer money that was used to renovate their Windsor, England home, Frogmore Cottage, prior to their announcement about stepping down from royal duties.

Frogmore Cottage was given to Harry and Markle in 2019 as a gift from the Queen.

While Harry and Markle are living in California, Frogmore Cottage is still reportedly in their possession — but the home is set to be occupied by Prince Harry's first cousin, Princess Eugenie, and her husband, Jack Brooksbank, a source close to the Duke and Duchess of Sussex confirmed to Insider on Saturday.

A report from the UK publication The Sun published on Friday claimed that Harry and Markle's belongings were removed from Frogmore Cottage while Princess Eugenie and Jack Brooksbank moved in. The publication cited a source that claimed: "Emptying their home and handing over the keys is a pretty strong sign Harry and Meghan have no plans to return."

However, the source close to Harry and Markle confirmed to Insider that contrary to rumors of the couple completely giving up the home, Frogmore Cottage remains in the possession of Harry and Markle.

Omid Scobie, the royal editor at Harper's Bazaar, added via Twitter that Harry and Markle "have not moved out and will still stay at the house during UK visits."

Harry and Markle last visited the UK in March, when they attended their final engagements as working royals.

Aside from a video call in August, when Prince Harry told members of the Rugby Football League that he wants to return to his homeland to watch the upcoming World Cup in fall 2021, the couple has not spoken publicly about explicit plans to return to the UK.

Representatives for Buckingham Palace did not immediately respond to Insider's request for comment.