First lady Melania Trump on Monday morning revealed this year’s White House Christmas decorations and theme: “America the Beautiful.” The unveiling comes less than two months after secret recordings from June 2018 were aired by CNN, in which she complained about preparing for the holidays at the White House.

The first lady announced the decorations on Twitter with a 1-minute video showcasing the festive halls and rooms of the White House. The White House also issued the video and a press release about the reveal on Monday.

“During this special time of the year, I am delighted to share ‘America the Beautiful’ and pay tribute to the majesty of our great Nation,” the first lady tweeted. “Together, we celebrate this land we are all proud to call home.”

During this special time of the year, I am delighted to share “America the Beautiful” and pay tribute to the majesty of our great Nation. Together, we celebrate this land we are all proud to call home. #WHChristmas pic.twitter.com/fdZmB3rdXL

This year’s official White House Christmas tree stands in the Blue Room and is more than 18 feet tall, the White House press release outlines. The Fraser fir, which arrived last week, features artwork from students across America who were asked to depict the “people, places, and things that capture the spirit of the state in which they call home,” the press release said. It is also decked out in a yellow and gold theme.

Much of the decor spotlights people or groups who have made lasting contributions or sacrifices for the country.

First responders and frontline workers are highlighted in the Red Room — as they continue to work tirelessly amid the coronavirus pandemic. Handmade ornaments spotlight both professionals and volunteers, the release said. 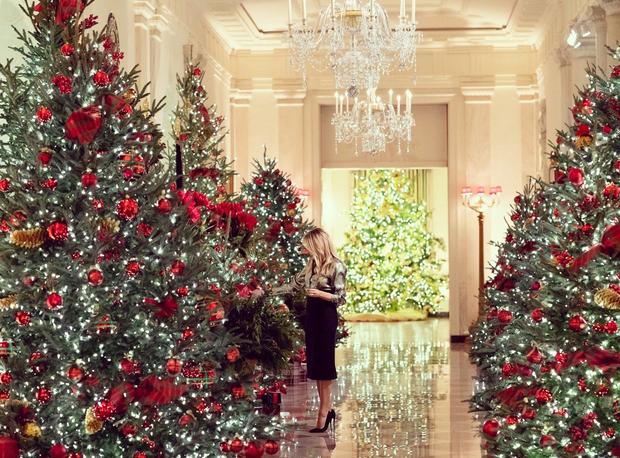 The annual Gold Star Family Tree greets those entering the East Wing and “pays tribute to our American heroes and their families who walk beside them in service,” according to the release. The families who decorated the tree this year put the name of their fallen family member on ribbon that will be featured on the tree.

The White House Library’s decor “highlights women at the forefront of American achievements who have paved the way for generations to come,” in honor of the recent 100th anniversary of the ratification of the 19th amendment, which guaranteed women the right to vote. It also features the winning art from the first lady’s 19th Amendment child art competition this year.

The design highlights America’s natural beauty, as well. Urns with foliage representing the official tree of every state and territory stand in the East Colonnade, as vignettes in the windows of the Green Room showcase a variety of wildlife, according to the release. 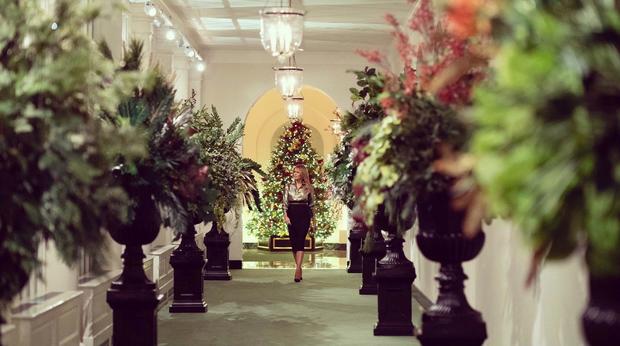 America’s achievements in transportation, technology and innovation are on display in the East Room, with planes, trains and cars traveling through ribbons, trees and between twinkling lights.

The designs also feature some holiday staples, including the first family’s stockings hanging above a fireplace in the China Room and a massive gingerbread house of the White House’s likeness on display in the State Dining room, according to the release.

“America the Beautiful” #Christmas at the @WhiteHouse pic.twitter.com/2kCBET7EcL

This year’s decorations may just be the most anticipated of the Trump presidency, following the public release in October of the first lady’s expletive-filled 2018 complaints about planning for the holiday at the White House.

“I’m working … my a** off on the Christmas stuff, that you know, who gives a f*** about the Christmas stuff and decorations?” She said in the leaked audio that was secretly recorded by Trump’s former senior adviser and friend Stephanie Winston Wolkoff. “But I need to do it, right?”

She also downplayed President Trump’s family separation policy, as well as discussed her irritation with the criticism of the policy in the audio.

CBS News has not independently verified the recordings.

Wolkoff dropped a book in September about her relationship with the first lady called “Melania and Me: The Rise and Fall of My Friendship with the First Lady.” The book was published by Simon & Schuster, a division of ViacomCBS.

In a statement to CBS News in October, the first lady’s chief of staff Stephanie Grisham criticized the recordings by Wolkoff.

“Her only intent was to secretly tape the First Lady in order to peddle herself and her salacious book,” Grisham said. “There is no way to know if these recordings have been edited and it’s clear the clips were hand-picked and presented with no context. The First Lady remains focused on her family and serving our country.”

Chris Brito contributed to this report.