Home » Lifestyle » MELANIE MCDONAGH: My teenagers had only two lessons since lockdown

MELANIE MCDONAGH: My teenagers had only two lessons since lockdown

MELANIE MCDONAGH: My teenagers have had only two lessons with a teacher since the start of lockdown

If you want to know how the pandemic divides us, just have a look at the difference between what’s happening in state and private schools during the lockdown.

The other day, I bumped into a friend in the park – at least, we air-kissed from a distance – and asked after each other’s families.

I mentioned my children had only been given two lessons each since the schools closed down. She looked startled.

Her daughters are in fee-paying schools – and they’re getting an education.

It’s done online, of course, but it’s schooling all the same. There’s something close to a normal school day with a timetable, and classes led by teachers who teach and ask the pupils questions. If the children don’t hand in homework, the school is on their case. 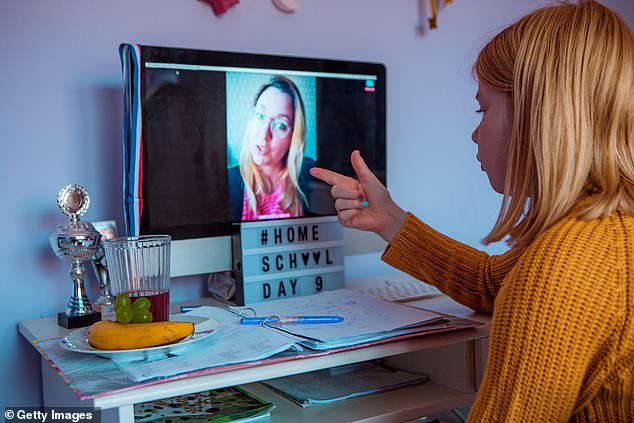 MELANIE MCDONAGH: My daughter has had two maths lessons with a teacher online. My son has sat through two physics lessons, though the teacher made it clear this was entirely voluntary on her part (file image)

‘The whole lockdown thing’s been rather good for the girls,’ said my friend. ‘They’re less stressed. They’re doing more art.’

That’s not what’s happening in most state schools – and that includes the excellent London secondaries attended by my 13-year-old girl and 16-year-old boy.

When I say they’ve only had two lessons each since the start of lockdown in March, I mean exactly that.

My daughter has had two maths lessons with a teacher online. My son has sat through two physics lessons, though the teacher made it clear this was entirely voluntary on her part.

These lessons were enlivened by the usual misbehaviour – one boy found a way to ‘mute’ the physics teacher – but they were lessons all the same, which shows the school can do it.

As for the rest of the time, there is no teaching (aside from my son’s weekly piano lessons, which involve a laptop perched on the keyboard and which we pay for).

That’s not the way their teachers see it, of course. They point out that not all children have constant access to a computer with video technology. Instead, my daughter’s school relies on a teaching system called Google Classroom – a way to set work online and assess it when the pupils send it back. 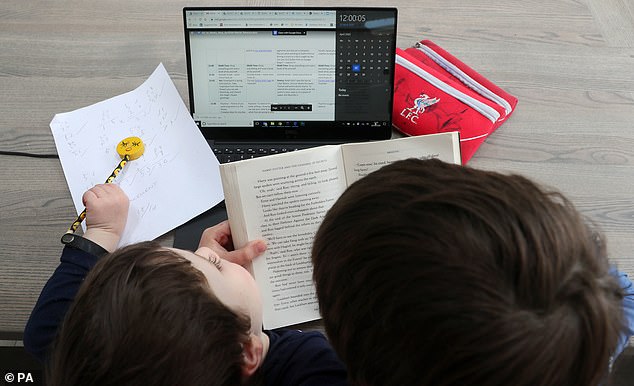 A first class pupil in Dublin reads to his younger brother, as according to his home schooling timetable

In theory, then, my children are working busily in the Google Classroom, just as they do at school. In practice, that’s not what’s actually happening. Disciplined, motivated children will be fine. Girly swots will get on with their work during school hours and send it in, unprompted. My children are another matter.

Without attention from the teachers, without a timetable, they are effectively left to their own devices. In front of a screen. What do you expect to happen?

In practice, then, my daughter ends up talking to her friends – she says it helps with her work – and shrieking with laughter. My son gets on with his work for a bit, then silently switches screen. Short of sitting behind each of them, it’s impossible to know what’s happening. Naturally, when I ask them if they’re working, they chorus ‘Yes!’

Contrast this with the private school regime one friend describes for his seven-year old.

‘My little boy has Zoom Maths and English every single day plus a general class lesson every afternoon,’ he told me. ‘He also gets emailed lessons with videos in French, RE, computer studies, art, history and PSHE (Personal, Social and Health Education).

‘Plus they have video assemblies every Monday and one-to-one sessions with the form teacher every Friday. Oh and Zoom PE on Wednesdays. And the usual weekend homework. Plus two spelling tests every week.’

In other words, that seven-year-old child gets more teacher attention in a single day than my teenage children have been given since the start of lockdown.

This week the deputy head at my daughter’s school eventually called me – 52 days into lockdown. He wanted to let me know that my daughter had submitted no work whatsoever in the following subjects: computer science, French, Spanish, geography, science… I was thrown. What? None? 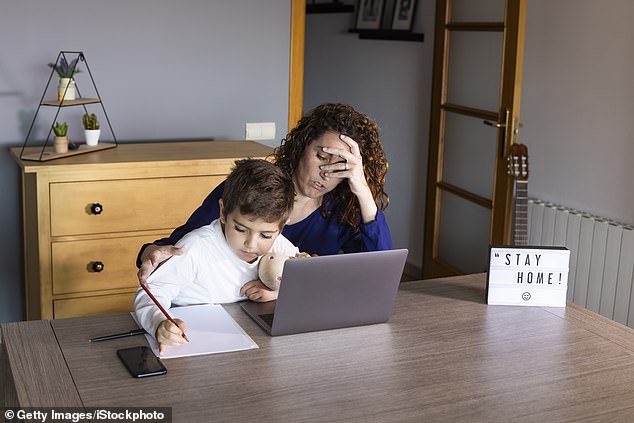 Without attention from the teachers, without a timetable, they are effectively left to their own devices (file image)

So what had she been doing on the computer apart from talking to her friends? Like an idiot, I was assuming she was doing work. I explained that she’d had only two proper lessons. ‘That’s right,’ he said briskly. ‘We’re focusing our attention on the two year groups who are having exams.’ I said it would help if the teachers could get in touch with me. Just two did.

One of my son’s friends is at Eton. They’re in the same GCSE year, in fact. But now exams are cancelled, the teachers are exploring subjects with their pupils that they’re passionate about, which aren’t on the school curriculum. That’s real education. If you take the view that education makes a difference to children’s chances in life, this gulf between state and private schools really matters.

And my children go to very good state schools; they were lucky to get into them. God knows what’s happening elsewhere. Some schools do monitor pupils’ performances closely. But as one teacher told me: ‘In a bad school the teacher’s not bothered to mark the work and the children aren’t bothered to submit it. That’s where the whole thing falls down.’ 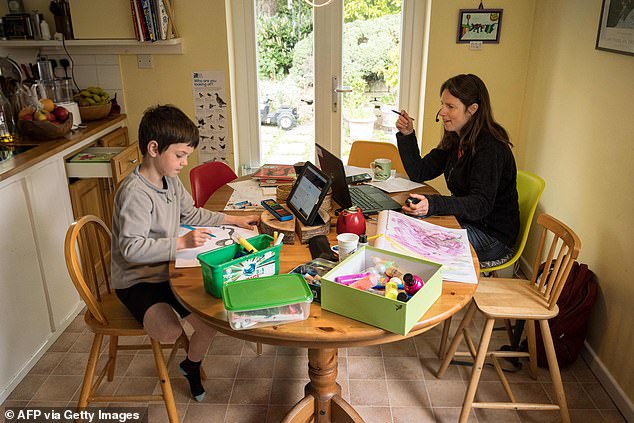 Six-year-old Leo completes a homeschool activity suggested by the online learning website of his infant school, as his mother Moira, an employee of a regional council, works from home in the village of Marsden, near Huddersfield

I’m sure that my teacher friends are right when they say that children can easily get out of online lessons and spend the time Whats-Apping their friends or pretending that they’ve got connection problems. But that shouldn’t stop schools from trying

There’s another problem. Textbooks went out of fashion in British schools more than a decade ago and that’s why most pupils are over-reliant on computers. Yet you could equip a whole class with textbooks for the price of an iPad.

A child with a book can simply find a quiet corner of his home to get on with his schoolwork, like most of us once did. We need to break the connection between learning and screen time.

There should be some regular interaction, too, between pupils and teachers, and staff and parents, just like in private schools.

But the real priority is to get children back into the classroom as soon as possible.

Keeping schools shut has widened the gap between rich and poor, private and state schools, good schools and bad.

We’re not all in this together.