Message from a leader of the pro-democracy protesters defying China

Why I’ve fled my home in Hong Kong aged 26 to keep fighting the tyrants of Beijing: A rousing message to the world from a young leader of the pro-democracy protesters bravely defying China

As my plane took off, I looked down wistfully for one last time at the city I love so much, with its skyscrapers, its ferries and its fabulous fizzing energy.

I was bidding farewell to Hong Kong. At the age of 26, I was leaving my home, my parents, my two brothers and my friends – even the pair of cats I had saved from the streets and who offered me unconditional love in return.

I had no desire to depart this bustling, life-enhancing metropolis, which has been my home since I moved aged six with my family from the Chinese border city of Shenzhen.

But like other activists fighting for democracy and freedom, I knew I would be targeted by the communist leaders in Beijing under a sweeping new security law designed to silence the millions of Hong Kongers resisting the slide into autocracy. 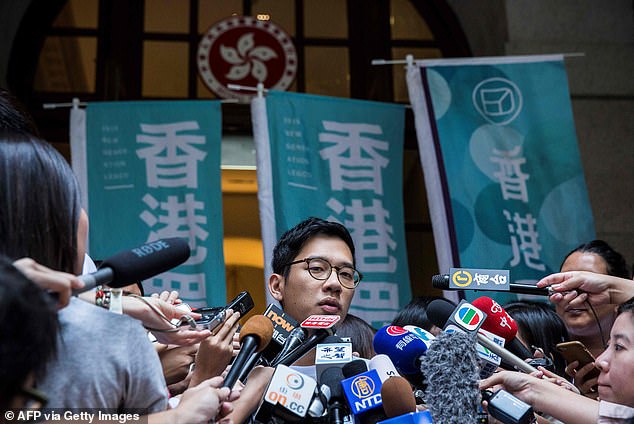 Nathan Law, 26, (above) left Hong Kong as he knew he would be ‘targeted by the communist leaders in Beijing under a sweeping new security law designed to silence the millions of Hong Kongers resisting the slide into autocracy’ 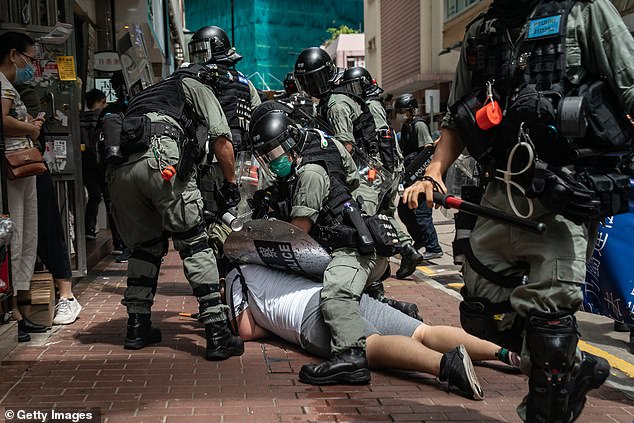 A man is detained by riot police during a demonstration against the new national security bill on July 1, which marks the 23rd anniversary of Hong Kong’s handover to China

This is a dark moment for Hong Kong. China is openly tearing up the One Country, Two Systems deal agreed with the UK in the 1997 handover. It was meant to last 50 years, guarding the freedoms that made my city so vibrant and a world-beating financial centre.

No one in Hong Kong has any illusions over Beijing honouring those promises or respecting their human rights.

So last week, I had to board that plane and leave. Now I must even hide where I am so I can continue my advocacy work as I urge the world to support my people and stand firm against totalitarianism.

None of us knew what was in the clampdown bill until it was suddenly inflicted on us. Then, on Tuesday, we saw the reality on the streets – and it made us fearful.

Hong Kong’s Beijing-appointed chief executive Carrie Lam now has the power to determine if any action violates national security. She can decide if someone such as myself should be put under surveillance or have phones tapped.

A new security agency has sweeping powers, with civil servants forced to submit to its iron will. Secret police can now operate openly in Hong Kong, no longer having to hide their presence as in the past. The terms of the legislation are deliberately vague, but the penalties are harsh, with the possibility of secret trials without juries, extradition to China and life imprisonment.

The new law targets alleged foreign collusion – an approach used on the Chinese mainland under President Xi Jinping to silence dissidents and stifle any challenges. 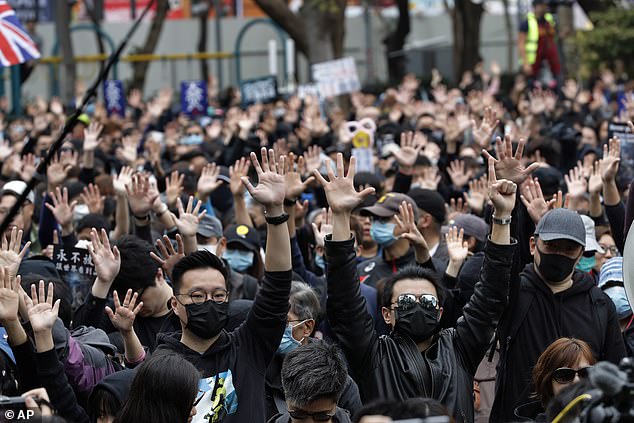 China is openly tearing up the One Country, Two Systems deal agreed with the UK in the 1997 handover, which was was meant to last 50 years. Above, protestors raise their hands to symbolise the five demands of the pro-democracy movement

We have seen how Demosisto, the political party I formed with my friend Joshua Wong and others after the earlier wave of ‘Umbrella’ protests in 2014, is routinely smeared in Chinese state media with false claims of CIA funding.

So when the new law came into force, I had to leave Demosisto, which has since disbanded, like other groups advocating democracy. We were too recognisable, the risks were too great.

The next day, I spoke on video to the US Congressional Committee on Foreign Affairs. It was my third testimony on Capitol Hill, but now simply talking about the plight of Hong Kong in such a forum has become a breach of the law as ‘collusion’.

As I told those American politicians, so much has been lost in the city that I love – especially the freedom to speak the truth. I knew my testimony would put my safety in jeopardy. Of course, I am sad to be leaving. Yet I face the future with determination.

The world must understand that these events in Hong Kong expose how China under President Xi is becoming ever more assertive and autocratic. The situation has been deteriorating for several years, with attempts to force China’s agenda on schoolchildren, freedom of speech weakening and even booksellers seized for selling literature about their leaders.

Four years ago, I was elected to Hong Kong’s legislative council. Beijing eventually thwarted me by claiming I failed to swear the oath correctly, on grounds that I quoted Mahatma Gandhi’s saying ‘you can never imprison my mind’.

One month after disqualification, I was jailed for involvement in the sit-ins. I served a couple of months with gangsters, which was unforgettable – although having no internet gave me time to read and reflect.

The public’s anger exploded again last summer. The cause was an extradition bill that could send Hong Kong citizens to face trial in China, where the legal system is designed to serve the interests of the ruling Communist Party.

Vast protests of up to two million people were met by police with tear gas and even gangsters hired to attack demonstrators. We have seen the footage of assaults and beatings, the spraying of bystanders – even children – with pepper spray, the shooting of journalists at close range with rubber bullets and bean bag rounds. I have visited arrested protesters in jail. 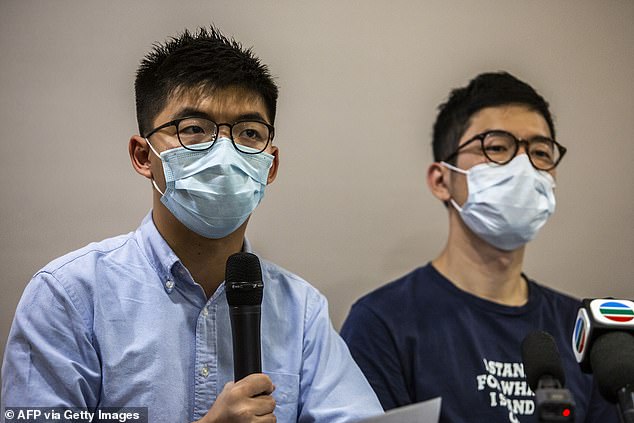 Demosisto, the political party Nathan Law (right) formed with Joshua Wong (left) after the earlier wave of ‘Umbrella’ protests in 2014, is routinely smeared in Chinese state media with false claims of CIA funding 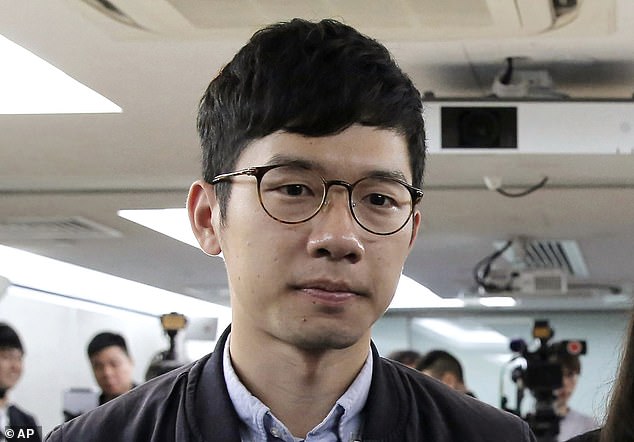 Many were smart kids, risking bright futures because they love their city and loathe corruption. It was touching to see more than 100,000 people back on the streets last week even after the draconian new security law. This fills me with hope.

Hong Kong’s traditional way of life is being extinguished, yet its people have shown how they value freedom. They must be supported in their epic struggle as they are at the forefront of a global fight between authoritarianism and democracy.

We are grateful to the UK for offering sanctuary to three million Hong Kongers. Now we need to see a unified and forceful response from all nations that respect democracy to contain the new Chinese expansionism – or Taiwan will be next.

Businesses must also show they will not be bought off by Beijing’s money. China might be able to offer some lucrative deals, but in the longer term, Western firms risk selling out their liberal values.

The protests can continue if the world shows support and prioritises human rights before trade deals. China, for all its belligerence and imperial dreams, is less strong than it seems, with an ageing society and unbalanced economy.

I had no wish to leave my home. I faced the choice of whether to stay silent in the face of autocracy or leave to continue the fight for freedom on the world stage.

We will sustain our resistance on all fronts. Millions of brave people in Hong Kong facing China’s dictatorship have shown that their determination for democracy will not be easily extinguished. They give us hope. We must not let them down.