Miami building collapse: Attorneys, other experts weigh in on causes

Attorneys and experts who spoke to FOX Business are voicing concerns about cracks in the concrete of the Champlain Towers condominium in Surfside, Florida, that unexpectedly collapsed on June 24.

The building, constructed in 1981, was undergoing its 40-year recertification process at the time of the collapse, and while officials have yet to determine a specific cause behind the deadly disaster, experts are highlighting a combination of structural complications that may have played a role in last week’s tragedy.

Rene Rocha is an attorney with Morgan & Morgan, which is actively investigating the collapse, and one of the lawyers leading litigation related to the 2019 Hard Rock Hotel building collapse in New Orleans.

"We’ve been working to investigate what caused this, and we’re seeing some very significant indications of a loss of structural stability in concrete slabs underneath the building [and] the rebar holding up the structural supports," Rocha told FOX Business, "but there’s still a lot to learn. This is still a rescue operation." 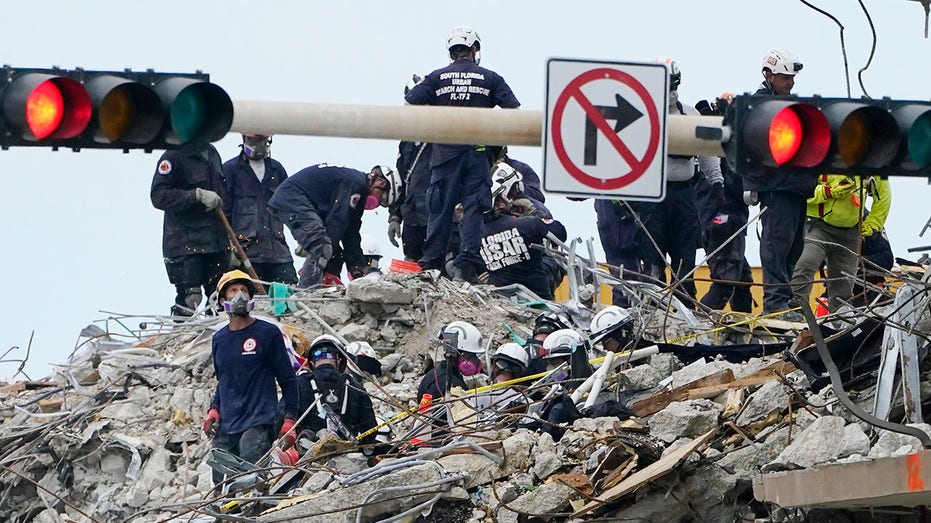 A rescue worker pauses to look up at what remains of the Champlain Towers South residential building, Monday, June 28, 2021 in Surfside, Fla. Many people were still unaccounted for after Thursday’s fatal collapse. (AP Photo/Marta Lavandier)

Cava said during a Tuesday press conference that she "will be meeting with subject-area experts from multiple relevant fields from engineering to legal to construction to development to soil to geology to look closely at every possible angle on this issue related to building safety."

The mayor and her staff plan to "develop a set of recommendations that need to be made at all steps in the building process to ensure that a tragedy like this will never, ever happen again."

The litigation process in these types of disasters can take years and determining exact causes behind the collapse could take months, Rocha said, but it’s possible it could take as little as one year to get relief for affected communities and individuals depending on a variety of factors.

"Here, I would imagine that there will be a number of different defendants who have to coordinate, so it could take some time," he said, adding that investigations into the origins of the collapse could take "several months" depending on the timing of rescue operations.

Morgan & Morgan and law firm Saltz, Mongeluzzi & Bendesky are investigating and exploring possible legal action regarding the collapse. Meanwhile, the National Institute of Standards and Technology (NIST) confirmed to FOX Business that it is preparing to send a team of six scientists and engineers to Miami. Cava also announced Tuesday that Florida State Attorney Katherine Fernandez Rundle is planning to conduct a grand jury investigation. 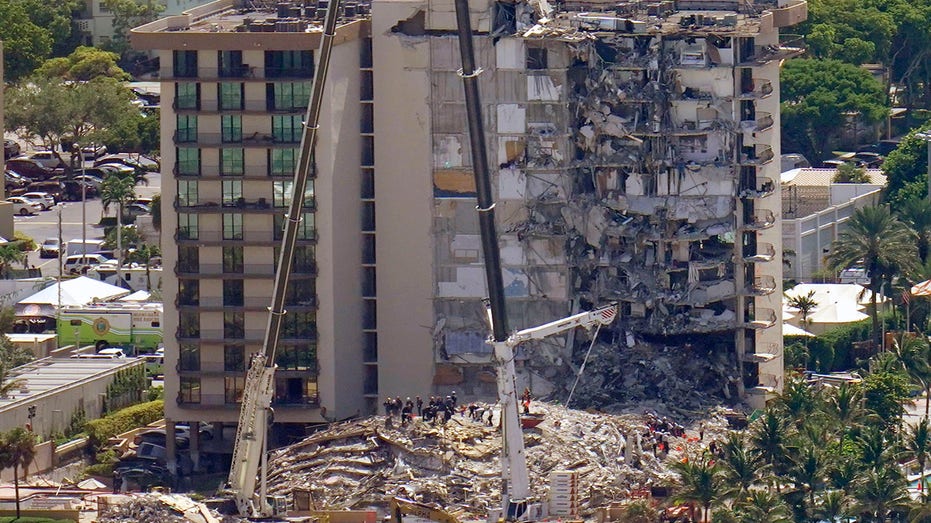 The NIST also investigated disasters such as the collapse of the twin towers on 9/11, Hurricane Maria’s devastation in Puerto Rico and a Rhode Island nightclub fire that killed 100 people. Previous investigations have taken years to complete.

An October 2018 report from Morabito Consultants engineers and shared on Surfside’s official city website detailed concrete slabs beneath the building’s pool deck that were "showing distress" and recommended they be "removed or replaced." The engineers also recommended "all concrete slabs located in the parking garage be replaced," noting that limestone was leaking onto cars.

"The report details a pretty dangerous situation, where you have a pool that was clearly leaking for several years and improperly designed in a way that drainage could not occur," Rocha, who grew up in South Florida, said of the report. "Instead of drainage, you just had erosion in the materials."

"It’s not something that you see," the attorney said.

Geophysicist John Craig, director of Frisco Geophysical, told FOX Business that limestone cavities are "dangerous" because a building with cavities don’t "slowly sink or subside." Instead, "there is no activity on the surface until … the breaking point is reached from the sheer weight of the structure, and it collapses with no warning into the cavity."

"I really don't think there was some catastrophic failure of the building due to weakened metal so much as groundwater penetration under the building as I mentioned, creating a cavity," Craig said, adding that the side of the building that collapsed "dropped … with really no visible cracking beforehand."

"Sea-level rise as well is and will continue to be a contributory factor as well," he continued.

A 2020 study into land and sea–level rise conducted by Dr. Shimon Wdowinski at Florida International University had looked at the Champlain Towers site and determined it was sinking by between 1 and 3 mm a year in the 1990s. That could have sped up or slowed down in the ensuing decades, he explained this week. Or it could have continued unevenly. Still, other cities see significantly larger subsidence without suffering building collapses, FIU noted in a new study. 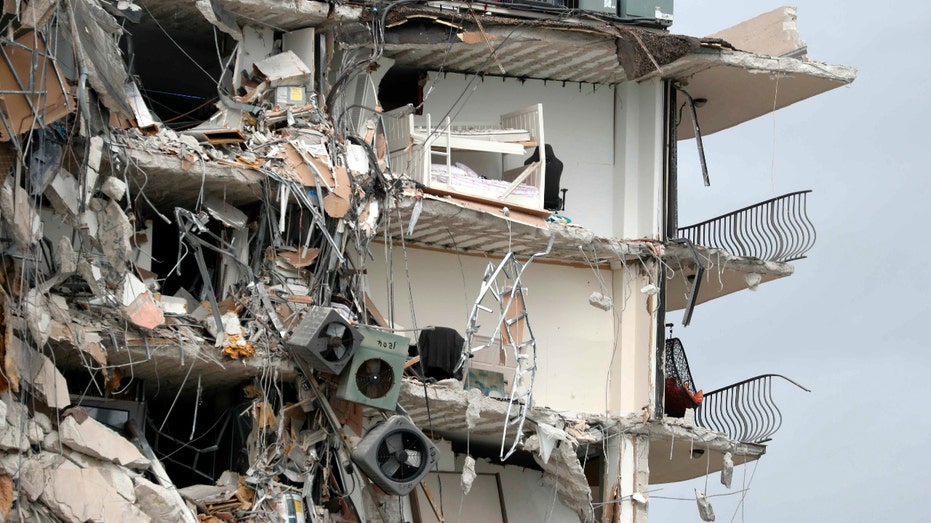 Items and debris dangle from a section of the oceanfront Champlain Towers South Condo that partially collapsed Thursday, June 24, 2021, in the Surfside area of Miami, Fla. (Susan Stocker/South Florida Sun-Sentinel via AP)

"When we measure subsidence or when we see movement of the buildings, it’s worth checking why it happens," Wdowinski said. "We cannot say what is the reason for that from the satellite images but we can say there was movement here."

Images of Champlain Towers’ interiors from a commercial pool contractor taken about 36 hours before the collapse and obtained by the Miami Herald purportedly show cracked concrete, exposed rebar and a wet floor in the building's pool equipment room.

Maxwell Marcucci, director of public relations firm Levick and spokesperson for the Champlain Towers South condo association, said following the release of the images that "the board retained experts and trusted experts – and at no time were they told of imminent threat of danger or collapse"

"If there was an issue, there were proper channels that could have been filed to take steps to rectify – up to and including evacuation," he said.

The city also published a permit to install roof safety anchors and provide stucco repairs that officials issued to the condo just one day prior to the collapse.

Additionally, public records reviewed by The Wall Street Journal showed that the developer of Champlain Towers initially made plans to build 12 floors of residential units but later added a penthouse, which added 9 feet to the building’s height, putting it slightly over Surfside’s legal height rules. 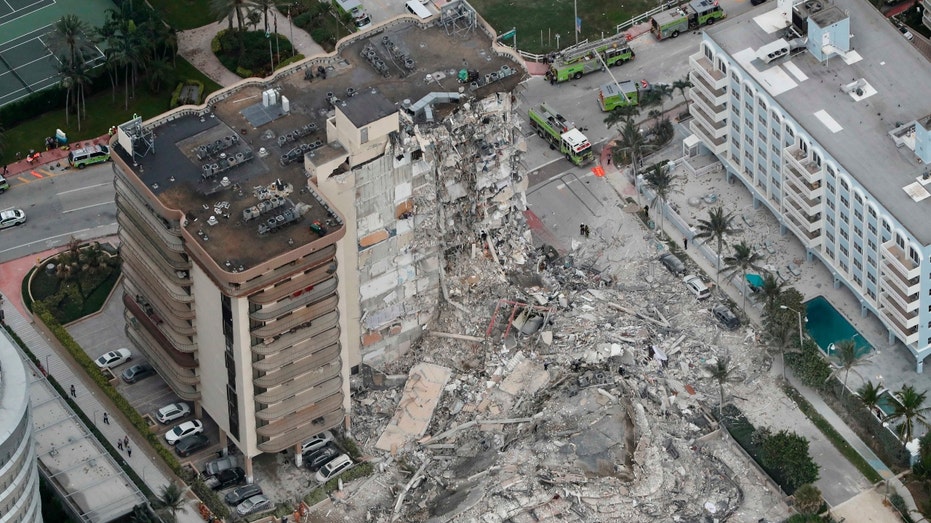 Steven Baldridge, an engineer and attorney at Baldridge & Associates Structural Engineering – an engineering firm specializing in risk management – pointed to corroding rebar in the building but indicated that the issue would be easy to identify and fix.

Corroding rebar "expands and actually pops the concrete off the surface, and you come back and you repair it," he said. Corrosion also happens "over a long period of time," so engineers typically have time to "fix something like that" after it is discovered.

Personal injury lawyer Ian Duncan echoed Baldridge's concerns saying that, "typically, a concrete building with rebar reinforcement will show signs of rust and deterioration to the steel rebar over time, which results in deterioration of the concrete surrounding the rusted rebar, and in turn, the potential for structural failure if not remediated."

"In oceanfront, saltwater areas, this deterioration is accelerated and magnified," Duncan said. "Therefore, the homeowners' association and its maintenance/management company should be diligent and vigilant in conducting periodic inspections in order to identify and remedy deterioration and prevent structural failure."