Now they’re resuming their partnership with Mr Williams becoming interim artistic director of Sydney Writers’ Festival following the resignation of Michaela McGuire who has taken up the same position at the Melbourne Writers Festival. As festival chair Mark Scott said, it’s like getting the band together again. 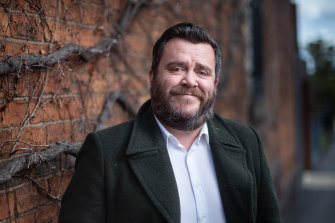 Michael Williams, the artistic director of Sydney Writers’ Festival for next year, says how writers festivals work and who they are for has to be re-examined.Credit:Simon Schluter

Ms Sharp, who has been festival chief executive for two years, said given the uncertain times the board did not want to rush into an international search for Ms McGuire’s replacement that could take up to six months, but wanted a ‘‘safe pair of hands’’ to run the program next year.

‘‘I see him as a very intelligent, adroit artistic director who is a collaborator. I know how good he is,’’ Ms Sharp said. ‘‘This is very much about him riding in on his white charger and doing it for a year and I think it will be fantastic. I don’t know anyone in Australia with the breadth and depth of his experience.’’

Ms Sharp said Mr Williams was very familiar with and to the festival. The Wheeler Centre has partnered with SWF since 2010 to bring international writers to Australia and he had done many on-stage interviews for the festival.

Mr Williams, who is based in locked-down Melbourne and when permitted will spend a week each month in Sydney before moving up after Christmas, said part of the appeal of the job was the challenge of reinventing next year’s festival.

‘‘It’s a difficult time for cultural organisations. And the fact is that the old ways of doing things and the old orthodoxies about what things like festivals are for and who they’re for and how they work has to be completely re-examined. There is something to doing that with someone I have worked with before and I know so well.

‘‘I think any reasonable person is assuming international travel and the way that festivals depended on it is not going to be a thing. So it’s quite exciting how you have to build the program on both discovery and on finding surprising ways to present familiar people. That stuff will be much more integral to what makes a festival a success, it won’t just be ‘here’s this year’s Booker winner’. It has to be a combination of people having a conversation that feels vital and feels like it can only happen in this place at this time.’’

And there was something exhilarating about a greater focus on Australian writing. ‘‘It is no great revelation,’’ Mr Williams said, ‘‘that there are many local voices we don’t know as well as we should. One of the things that makes Sydney such a good festival is its audiences trust them to introduce them to writers they don’t know.’’

Mr Williams had learned at the Wheeler Centre that in a role of cultural leadership it was vital to decentre oneself from the way the role was performed.

‘‘Your job is not to put your knowledge and your tastes up. It’s to listen and learn from all different communities that you don’t belong to and find a way to create a platform and a space for their voices. So not only do I not speak for the people of Sydney, I’m not a person of colour … and yet those voices are going to be integral for any kind of cultural output that claims to be relevant or timely in Australia.’’

Mr Scott said the degree of international participation next year depended on border restrictions, the operation of airlines and other factors ‘‘that are beyond our ability to accurately anticipate at this point. We have a queue of international writers who want to engage with us, including many of those who were slated to come this year … It’s the kind of thing that Michael and the board will be closely balancing through the rest of 2020.’’

Once planning for next year’s festival was underway the board would be considering the shape of the festival after 2021. In addition to the search for the right person to give artistic leadership in 2022 and beyond, he said the board faced ‘‘interesting’’ strategic decisions about a return to the festival’s traditional home at Walsh Bay: ‘‘We’ll review our options when all the work there is done.’’