Morrison shrugs off need to speak at global climate summit

Prime Minister Scott Morrison has been forced to wait for confirmation about whether he can speak at a United Nations summit on climate change this weekend as other leaders have their speaking slots approved.

Mr Morrison dismissed the importance of the summit after another question in Parliament over whether he was being kept out of the event because he would not commit to significant action to reduce carbon emissions. 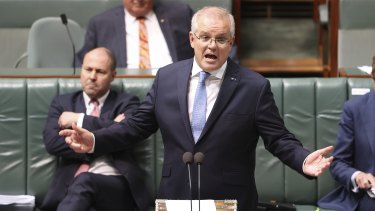 Prime Minister Scott Morrison said Australia’s climate and energy policy will be set “in Australia’s national interest, not to get a speaking slot at some international summit”.Credit:Alex Ellinghausen

British Prime Minister Boris Johnson is convening the December 12 summit with the United Nations and other world leaders, asking all those who speak to make "ambitious" new commitments.

"Australia's climate and energy policy will be set here in Australia, in Australia's national interest, not to get a speaking slot at some international summit," Mr Morrison said in question time on Thursday.

"And our government stands to serve the Australian people."

"Whatever country that may be, that may seek to impose whatever position on this country, Mr Speaker, Australia's policy will always remain sovereign within our borders, and nowhere else."

A decision to reject Mr Morrison as a speaker would be a significant snub one week after the Prime Minister told Parliament he expected to attend the online event to outline how Australia would reduce emissions.

The Sydney Morning Herald and The Age reported on Saturday Mr Morrison was in line for a speaking slot at the event and intended to use his speech to drop the use of Kyoto carryover credits in reaching Australia's 2030 target.

Mr Morrison's message was meant to signal greater ambition after years of government claims Australia is entitled to use "surplus" units the country accumulated when meeting the Kyoto Protocol emissions targets from 2008 to 2020 and count them toward the Paris targets from 2021 to 2030.

European and Australian diplomatic sources said earlier this week it was unlikely a commitment not to use carryover credits alone would be enough to convince the hosts — which include the United Nations, France and Britain — to allocate a speaking slot at the summit.

Cambodian Prime Minister Hun Sen confirmed his place at the Climate Ambition Summit on Thursday, with his foreign ministry issuing a statement saying he would deliver a pre-recorded video statement.

China appears likely to gain a position at the summit after talks between Chinese President Xi Jinping and French President Emmanuel Macron on Thursday.

The organisers had not issued a speakers' list by Thursday afternoon.