Dr Laming, a long-time Liberal MP, is accused of trolling two female constituents online and taking a photo of a young Brisbane woman while she was bending over with her underwear visible. 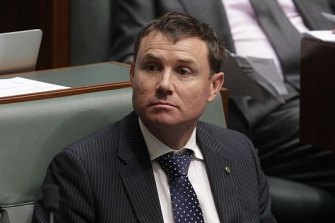 A move by Andrew Laming to the crossbench would send the Coalition into minority government.Credit:Andrew Meares

He has publicly apologised and is currently on medical leave, seeking counselling and empathy training. He will not contest his suburban Brisbane seat of Bowen at the next election.

Dr Laming’s behaviour has been widely condemned by his colleagues, with Victorian senator Sarah Henderson on Monday saying he should remove himself from the Coalition party room because she would not feel comfortable with him returning.

Mr Morrison said Dr Laming had already done “something quite significant” by announcing he would not seek re-election.

“This is not an insignificant thing to do … to walk away from a career in politics,” Mr Morrison said.

“He was elected to serve here for three years, in this parliamentary term, and that’s what he intends to do. He is here to serve the people in his electorate and I am following the very same approach that other governments have followed in the past.”

Women’s Minister Marise Payne said Dr Laming had already taken a “very serious step” to confirm he would not re-contest his seat at the next federal election. The decision not to re-contest was “not something that anyone in these roles takes lightly”, she said.

“He has been here for some years now. His behaviour is clearly inappropriate. He has taken steps to address that, steps the Prime Minister has outlined. That is the minimum that he should do,” she said.

A move by Dr Laming to the crossbench would send the Coalition into minority government as it holds just 75 seats in the 151-member lower house. Federal Parliament will not sit again until the second week in May, when the federal budget will be handed down.

Despite his decision to quit at the next election and resign from his parliamentary committee roles, Dr Laming dug in on Monday, saying the photos he took of the young woman were not sexually motivated.

In a statement to Sky News Australia, he said the photo in 2019 was trying to make light of the woman’s attempts to stock a small fridge at a landscape supply business.

“I tried to capture a humorous image of someone completing what seemed like an impossible task and without making it looked staged,” he said. “In thousands of front desks across Redlands, I seek permission to tell their story, but it backfired that day and I apologised immediately.

“The photo was taken from a distance, showing the worker in a dignified position on both knees, but with far more stock to fit than the fridge would hold.”

He also denied accusations by two women he harassed online – Sheena Hewlett and state ALP MP Kim Richards – that he took photos of them in a park.

“The photo was of my family, and they were in the background,” he said.

“I don’t think his behaviour is acceptable at all. In fact, I think it’s demeaning to women. And he has again taken steps to correct his behaviour. That’s where the focus is now,” he said.