I see Morrissey, former lead singer of The Smiths, is making news again. Why? Because The Simpsons just aired an episode in the US called Panic on the Streets of Springfield in which Lisa becomes obsessed with a young, depressed, British singer from the 1980s who is vegan and has a quiff, only to find out he is in truth a grey-haired, meat-eating, overweight man with anti-immigrant views.

As Lisa and her misanthropic friend Quilloughby, who used to be the singer in a band called The Snuffs, stroll through town, he casually disses the locals – telling Ned Flanders “facial hair is not a substitute for personality” and the twins Patty and Selma that “two times zero is still zero” – while serenading Lisa by singing “everyone is horrid except me, and possibly you”. 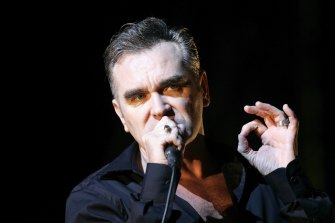 Morrissey has repeatedly denied accusations he is racist.Credit:Jo Hale

And Morrissey didn’t find any of it funny? It’s too close to home, apparently, and too near the bone. Though it’s possible that what’s really upset him is the fact they show the older Quilloughby’s belly bursting out of his shirt while he’s performing a concert.

Ouch. That is a bit below the belt. It’s a bit above the belt, actually, and kind of to the side a bit too. Definitely not flattering. We’re a full season behind, so we’re relying on reports for some of this, but apparently the episode mocks Morrissey’s long-standing vegetarianism too and suggests he might harbour some, ahem, “controversial” views on race.

Wait, the show that gave us Apu is calling someone racist? According to Morrissey’s manager Peter Katsis, writing on Morrissey’s official Facebook page, the show is guilty of “calling the Morrissey character out for being a racist, without pointing out any specific instances, [which] … only serves to insult the artist.”

But is Morrissey racist? Stop me if you think you’ve heard this one before, but Moz has said some nice things in support of right-wing anti-immigration figures Nigel Farage and Anne-Marie Waters in the UK, and some not-so-nice things about London mayor Sadiq Khan. 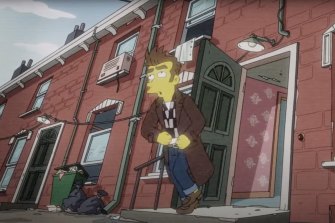 Some media stories have painted him as a racist, but he insists he is not – merely pro-English. It’s worth noting his biggest fanbase in the US, where he has lived for years, is Latinx. And that in 2012 NME apologised to Morrissey and settled a libel suit the singer brought against the site over a 2007 article he believed depicted him as racist. Last year, Sky Sports was forced to apologise after accidentally broadcasting a bit of banter in which an announcer said, “Morrissey’s been cancelled, hasn’t he, because he’s basically turned out to be a racist”.

So has Morrissey said anything about the episode? Yes. But fury has never been his style, and his response on morrisseycentral.com is pretty much what you’d expect – maudlin and resigned, with a soupcon of self-pity. He decried “the hatred shown towards me from the creators of The Simpsons”, said the music business, and the world in general, has become “a mesmerising mess” in which “free speech no longer exists”, but admitted he had grown used to being misrepresented. 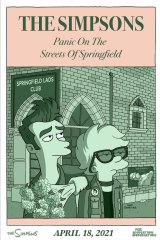 This ‘poster’, which references the inner sleeve of The Smiths’ album The Queen is Dead, was posted on the Morrissey Official Facebook page a couple of days before the offending episode aired. Credit:Facebook/Morrissey Official

So is he going to sue? Probably not. He says it would take an army of lawyers and very deep pockets to do so, and he has neither at his disposal. “Life is difficult and you must face it on your own,” he writes (and you can almost hear the guitar strumming in a minor key beneath these lines), “and even with the impossible-to-imagine legal artillery, everything can be repaired … except the human heart”.

I know it’s over, but is there anything else you’d like to add? Look, Morrissey won’t like this, but we reckon Quilloughby’s song – co-written by Bret McKenzie of Flight of the Conchords, and Simpsons writer Tim Long, with an obvious debt to Everyday Is Like Sunday – should play us out.

“Every day I try to smile, but can’t help but frown.
Every day I draw my bath and pray I will drown.
I step out my door and take a deep breath,
Turn back inside and pray for my death,