A first-time mother’s decision not to allow her mother-in-law watch her baby grandson open his Christmas presents raised eyebrows, until she revealed what the husband’s mother said during her pregnancy.

The anonymous British mother explained on the parenting forum Mumsnet that she was looking forward spending Christmas morning with just her son, seven months, and husband, before being joined by his family later in the day.

But her plans face disruption because her mother-in-law wants to watch her grandson open his presents, either in person or on FaceTime, and her husband wants to oblige.

Then, the mother dropped a bombshell that her mother-in-law had declared that she’d ‘drown’ the baby if it was a girl before her son was born.

People slammed the mother-in-law for the comments and said they would not even let her into their home if she had made the remark about their children. 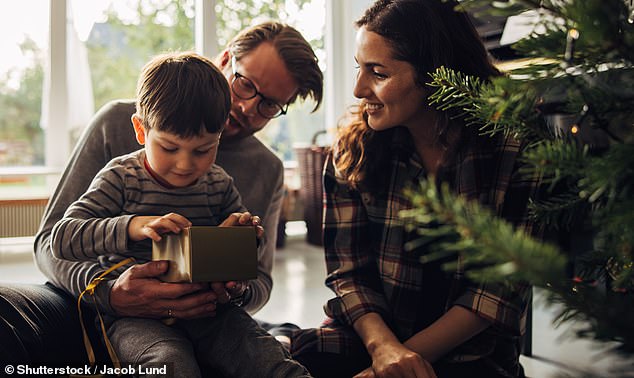 The mother explained she has planned to have a very quiet morning with her husband opening the presents under the tree with the dog and their son, before the extended family comes for dinner.

‘Mother-law has asked to watch my son open all his presents. Either by video calling or by us waiting for them to come and opening them all with him,’ she explained.

She added she said no, because her son had too many presents and it would be a ‘joy filled chore getting through them.’

She added she did not want to open her presents with her husband’s family because she doesn’t like being ‘on show,’ and that the couple only have a small living-room with not much space for guests. 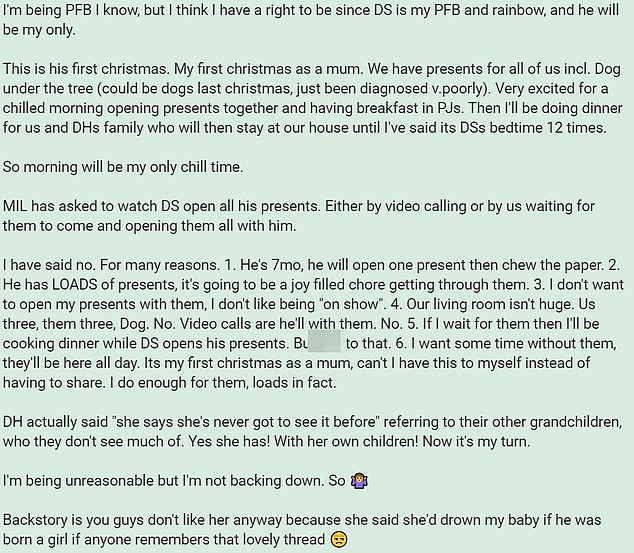 She also said that if her son opens his presents in front of the family before dinner, she’ll miss the moment because she will be cooking.

‘I want some time without them, they’ll be here all day. Its my first Christmas as a mum. Can’t I have this to myself instead of having to share? I do enough for them, loads in fact,’ she said.

She added that the mother-in-law got to see her own children open presents when they were young, and that it was now her turn.’

In a twist, she added: ‘She said she’d drown my baby if he was born a girl.’

People were shocked by the mother-in-law’s remark and said they would not let her into their house if she had made similar comments about their home children.

‘She wouldn’t even be allowed in my house if she had said that about my unborn child,’ one said.

;Why the f*** is she coming to your house EVER if she said she’d drown your baby,’ one said.

‘After what she said about your unborn baby it’d be a cold day in hell before she crossed my threshold again.’ 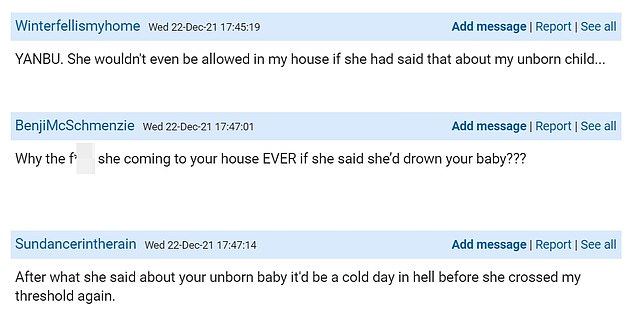 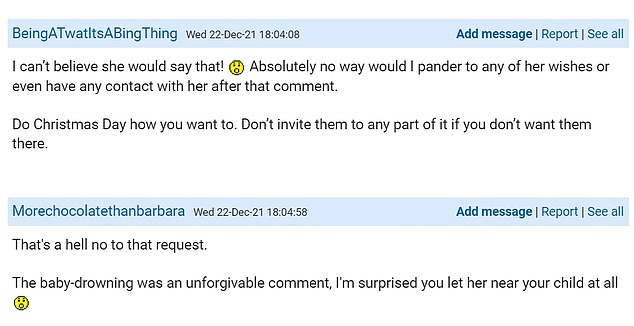 Another wrote:  ‘She said what about your baby????

Some people who tried to find a compromise changed their mind when they read the drowning comments.

‘I was thinking that surely you could allow a video call (even though that’s ridiculous for a 7mo), but then I saw the comment she made and honestly she’s sounds lucky that you’re talking to her at all,’ one said.

‘Even without the backstory you are being totally reasonable. Enjoy your peaceful wee family morning,’ one said.

‘If you wanted to throw her a bone (and, frankly, she barely deserves one) then you could offer to keep a couple of presents back that she can watch him open when she arrives as agreed at the previously arranged time,’ they added. 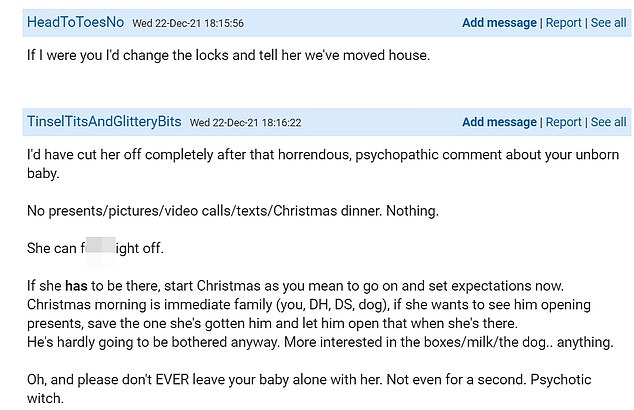 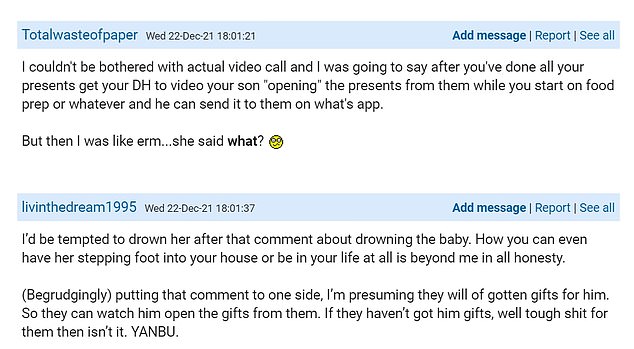 People said that even if the mother-in-law was sane and a loving woman, they would not say yes to her request

‘F****** hell you buried the lede there, she said WHAT?! Video calls and babies opening presents don’t mix, even with sane people,’ one said.

‘Frankly if she had said that about my child she wouldn’t ever set foot over my threshold ever again.

‘You are not being unreasonable, she is a witch. Enjoy your 1st Christmas with your beautiful baby,’ another wrote.

‘I can’t believe she would say that! shock Absolutely no way would I pander to any of her wishes or even have any contact with her after that comment,’ one wrote.

‘Do Christmas Day how you want to. Don’t invite them to any part of it if you don’t want them there,’ they added.

‘That’s a hell no to that request. The baby-drowning was an unforgivable comment, I’m surprised you let her near your child at all shock,’ one said.