Adrenaline junkie father, 44, who is 95% paralysed with Motor Neurone Disease and can no longer speak reveals his joy at breaking wheelchair speed record as he continues to hope ‘science will find a cure’

A father-of-two with Motor Neurone Disease (MND) who is 95 per cent paralysed has revealed his joy at entering the record books after breaking a world speed record in a custom-built wheelchair.

Jason Liversidge, from Rise in East Yorkshire, who was diagnosed with the terminal illness in 2013, recorded a speed of nearly 67mph during the record-breaking attempt at Elvington Airfield, near York, this week.

Before his illness took hold, Jason was an ‘adrenaline junkie’ who loved fast sports including skiing, says his wife Liz. 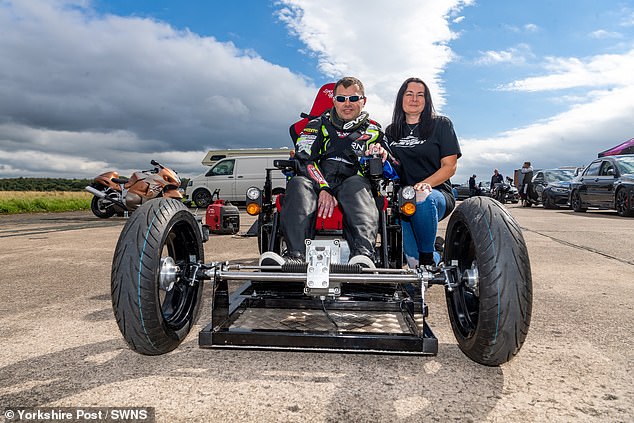 Jason Liversidge, 44, from Rise in East Yorkshire, was diagnosed with Motor Neurone Disease (MND) in 2013 at the age of 37 – this week, he smashed the world record for the fastest ride in an electric wheelchair after hitting nearly 67mph at Elvington Airfield in North Yorkshire 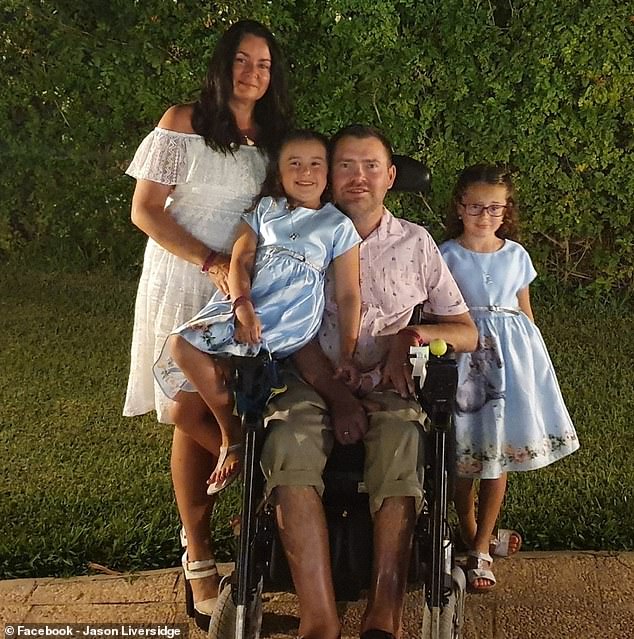 Seven years on from his diagnosis, Jason can no longer speak and is 95 per cent paralysed but his wife Liz says her husband is determined to keep completing challenges 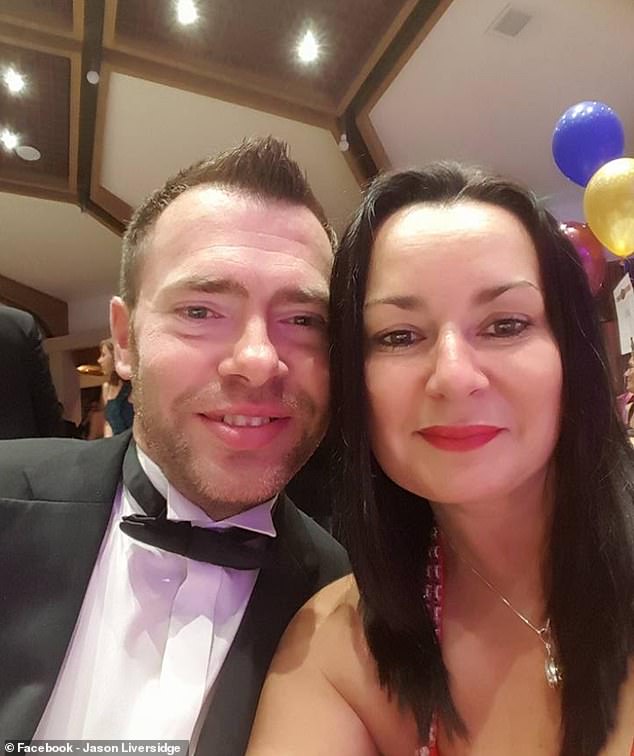 She said: ‘[Breaking the record] would be an achievement for anyone – but for someone who is almost completely immobile, it really is one hell of an achievement.

‘He’s absolutely thrilled, and I’m so, so proud of him. It’s been a very emotional day.’

There is currently no cure for MND and the disease is fatal, however, it progresses at different speeds in patients.

People with MND are expected to live two to five years after the symptoms first manifest, although 10 per cent of sufferers live at least 10 years.

Liz said the couple still live in hope that science will find a cure for MND to help Jason.

Despite his devastating diagnosis, the father-of-two has not let the illness hold him back – and since his diagnosis, he’s already scaled Mount Snowdon in a wheelchair, and abseiled off the Humber Bridge in Hull. 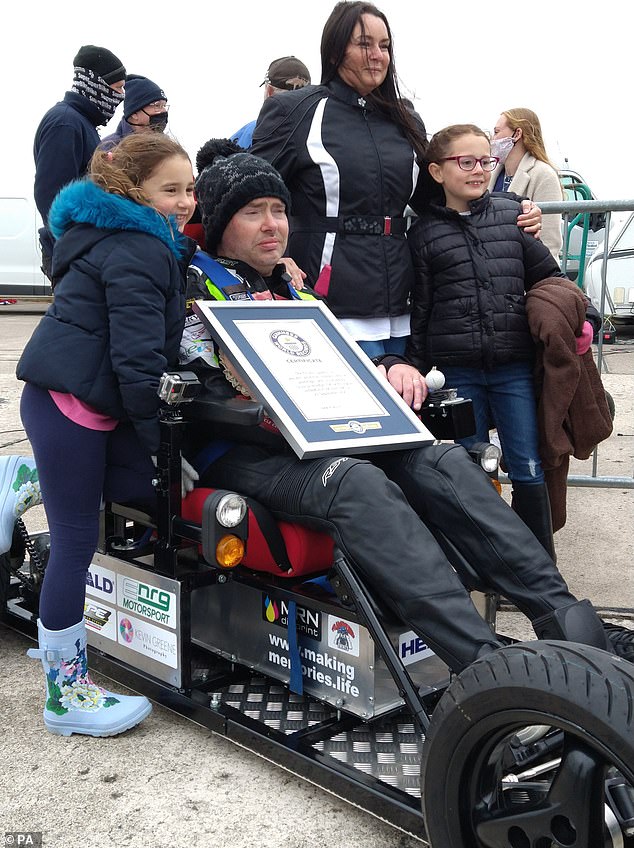 Proud: Jason Liversidge with his family after exceeding the previous record of 62mph and reaching 66.826mph in his wheelchair 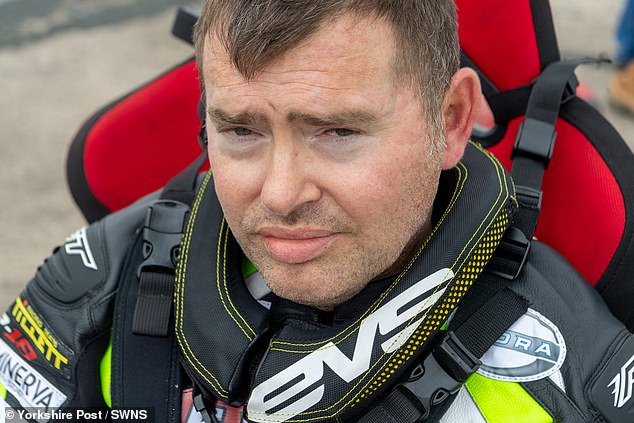 Although Jason can no longer speak, he communicated how he felt about the challenge via email, saying: ‘I’ve always had a passion for speed. I can no longer drive a car or ride a motorbike; however, I can drive an electric wheelchair.’

Liz said of his latest efforts: ‘It was really nerve-wracking watching him trying to break this world record – but mainly because I was watching him wondering if it was fast enough.

‘It was also a really cold day, and because he’s immobile he gets very, very cold quite quickly – so we weren’t sure he was even going to be able to do it.

‘But he’s been dreaming of this day since about 2017, so he’s really chuffed to have done it.’

Trevor Duckworth, CEO and Chief Timekeeper of Straightliners, said watching Jason break the record had ‘brought a little tear to the eye.’

There is no cure for MND and the disease is fatal, however the disease progresses at different speeds in patients.

People with MND are expected to live two to five years after the symptoms first manifest, although 10 per cent of sufferers live at least 10 years.

The NHS describes motor neurone disease (MND) as: ‘An uncommon condition that affects the brain and nerves. It causes weakness that gets worse over time.’

It was first discovered in 1865 by a French neurologist, Jean-Martin Charcot, hence why MND is sometimes known as Charcot’s disease.

However, according to Oxford University Hospitals: ‘Nearly 90 per cent of patients with MND have the mixed ALS form of the disease, so that the terms MND and ALS are commonly used to mean the same thing.’

Slurred speech is an early symptom and may later worsen to include difficulty swallowing food.

Muscle cramps or twitches are also a symptom, as is weight loss due to leg and arm muscles growing thinner over time.

MND is difficult to diagnose in its early stages because several conditions may cause similar symptoms. There is also no one test used to ascertain its presence.

However, the disease is usually diagnosed through a process of exclusion, whereby diseases that manifest similar symptoms to ALS are excluded.

The NHS says that MND is an ‘uncommon condition’ that predominantly affects older people. However, it caveats that it can affect adults of any age.

The NHS says that, as of yet, ‘it is not yet known why’ the disease happens. The ALS Association says that MND occurs throughout the world ‘with no racial, ethnic or socioeconomic boundaries and can affect anyone’.

It says that war veterans are twice as likely to develop ALS and that men are 20 per cent more likely to get it.

Lou Gehrig was one of baseball’s preeminent stars while playing for the Yankees between 1923 and 1939. Known as ‘The Iron Horse,’ he played in 2,130 consecutive games before ALS forced him to retire. The record was broken by Cal Ripken Jr. in 1995

As well as being known as ALS and Charcot’s disease, MND is frequently referred to as Lou Gehrig’s disease.

Lou Gehrig was a hugely popular baseball player, who played for the New York Yankees between 1923 and 1939.

He was famous for his strength and was nicknamed ‘The Iron Horse’.

His strength, popularity and fame transcended the sport of baseball and the condition adopted the name of the sportsman.

He died two years after his diagnosis.