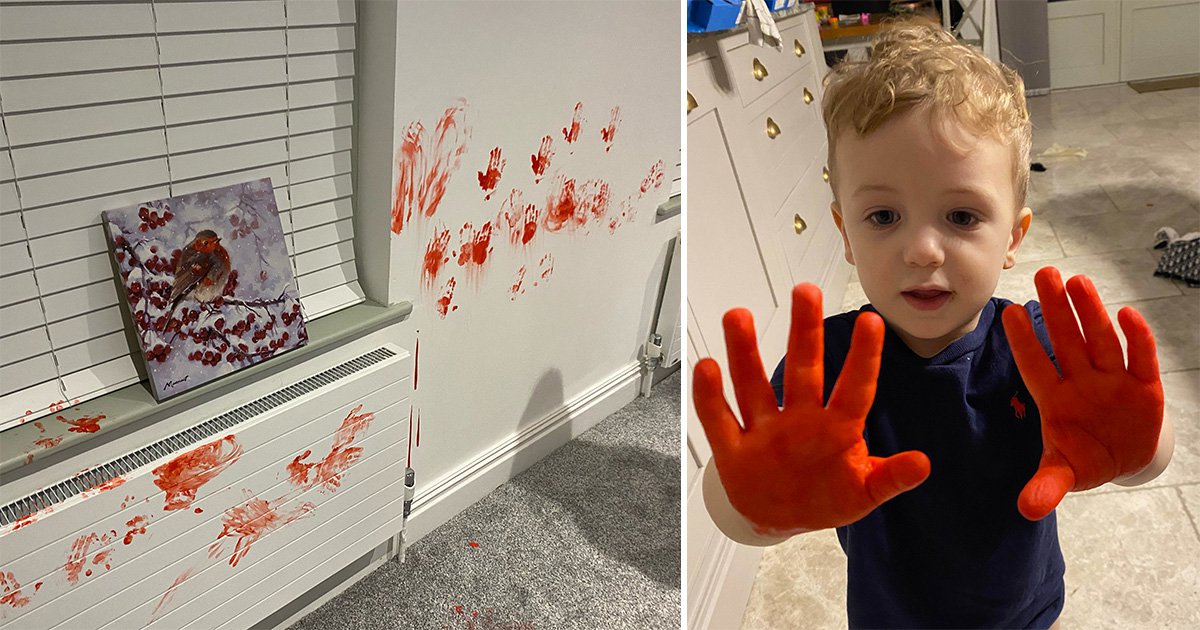 A mum was horrified to find a surprise from her toddler splashed across the walls of their house.

Two-year-old Kody Hanham snuck off to his brother’s room while his family were watching a festive film, and managed to get his hands on some red acrylic paint.

Kody then decided it would be an excellent idea to smother paint on his hands and spread it across the walls.

His mum Melanie, from Chepstow, Monmouthshire, said: ‘We were all downstairs watching Home Alone 2, Kody went up to his 10-year-old brother’s room, found a random tube of red acrylic paint in his drawer and basically went to work.

‘I went out to see what he was up to and he showed me these red hands.

‘I just put my hands over my mouth and was like “Please God, no!”’

Melanie, who works for the family’s roofing business, soon found a trail of handprints going up the stairs and into her older son’s room.

‘There was loads on the carpet too. I took photos to remember the incident and then spent an hour scrubbing,’ the 39-year-old adds.

‘It’s still not all off, his brother now has pink-tinged carpet and we will have to repaint the walls.’

Cheeky Kody is the youngest of four – along with 16-year-old Caden, 10 year-old Tyler and six-year-old Lola.

They all live in the house with their mum and 35-year-old dad, Ashley, who was also watching the festive flick at the time.

But because the bedroom was so badly affected, the family have now decided to re-do the problem area as a feature wall – instead of trying to fix it.

Thankfully, Melanie can now see the funny side.

‘I’ve got the paint off of the walls now but some places it’s worn through to the plaster,’ she adds.

‘None of my others were like this. Kody baffles me.’