A black mother of two white boys and a black girl opens up about the racism her daughter has faced and shares her worries about her getting the same opportunities as her older brothers.

Sophia Cooper, who lives in Redditch, Worcs, says she is regularly stopped in the street by strangers who ask why her daughter, Flossy, four, is black – when her two sons, Fin, 11, and Maxwell, eight, are white.

Children of different skin colours can be born to the same parents because of the variants of genes governing skin colour they receive.

Sophia says that she and husband Chris, 42, a recruitment manager, have always noticed a difference in the way their daughter is treated compared to her sons – and have finally decided to speak out about the racism she faces – including being called ‘chocolate face’ at preschool. 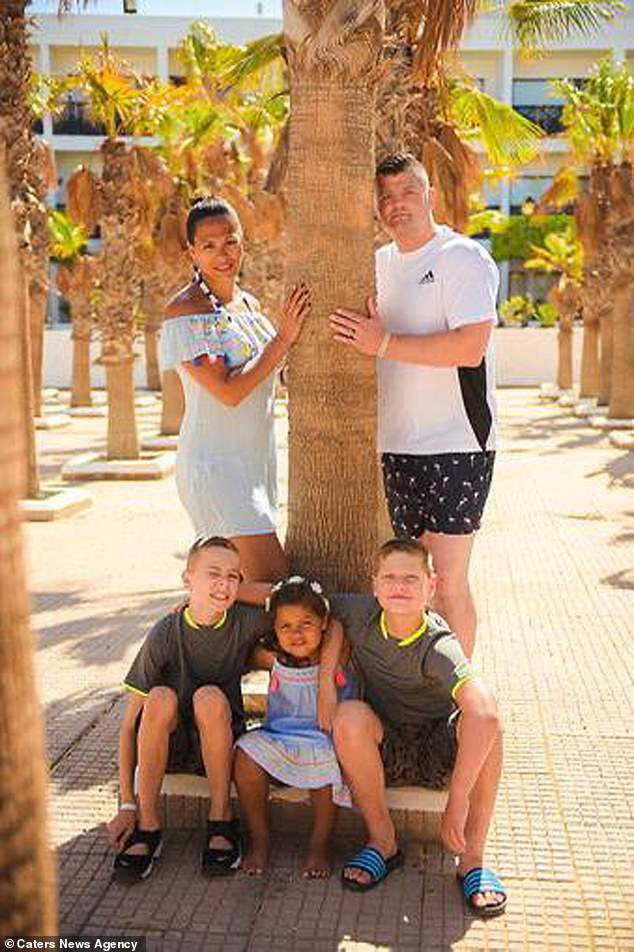 Sophia Cooper, who lives in Redditch, Worcs, and is a mum of two white boys and a black girl, has opened up about the racism her daughter has faced. Pictured, Chris and Sophia and their kids – Flossy, four, who is black – and Fin, 11, and Maxwell, eight, who are white 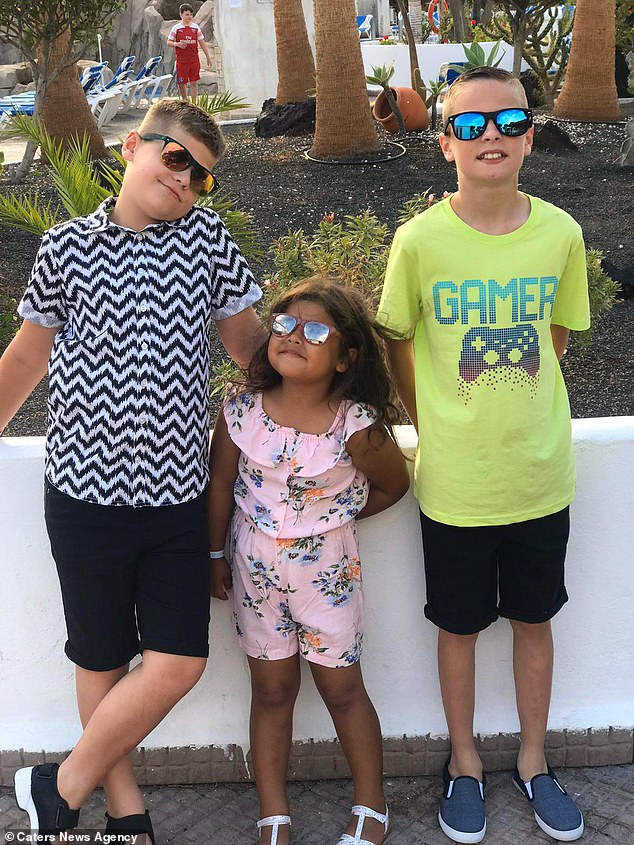 The mother-of-three shared her worries about her daughter Flossy getting the same opportunities as her older brothers. Pictured, siblings Flossy, four, who is black – and Fin, 11, and Maxwell, eight, who are white 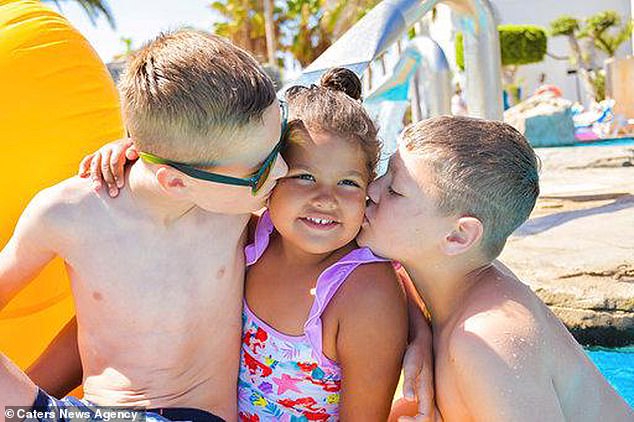 Sophia says she is regularly stopped in the street by strangers who ask why her daughter, Flossy, four, is black – when her two sons, Fin, 11, and Maxwell, eight, are white. Pictured, the siblings together

‘Flossy was told she has a “chocolate face” by another child, and she was really upset about it – the boys never had to deal with that,’ said Sophia, a women’s health charity director.

‘My boys have taken after my husband, fair skin, bright coloured eyes and our daughter looks like me, dark skin, dark eyes.

‘From the moment she was born we noticed the difference in the way people approach her, in the way they perceive her.

‘As a woman of colour it seems difficult to openly speak about race without making it seem you have a chip on your shoulder. 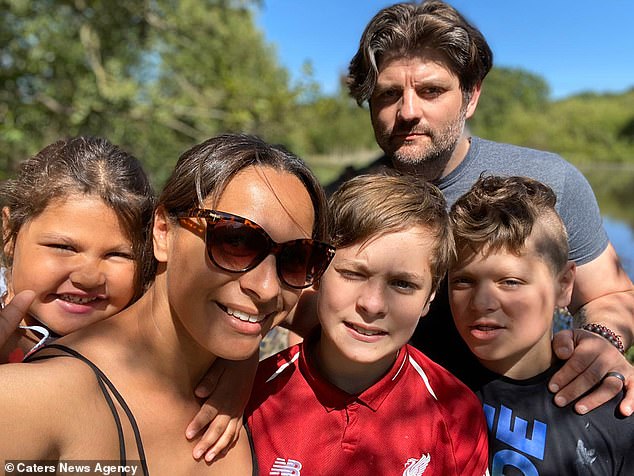 Unusually Sophia’s two sons have inherited her Irish husband’s fair skin and bright eyes, but her daughter has inherited her mum’s dark skin and hair. Pictured, Chris and Sophia and their kids – Flossy, four, Fin, 11, and Maxwell, eight 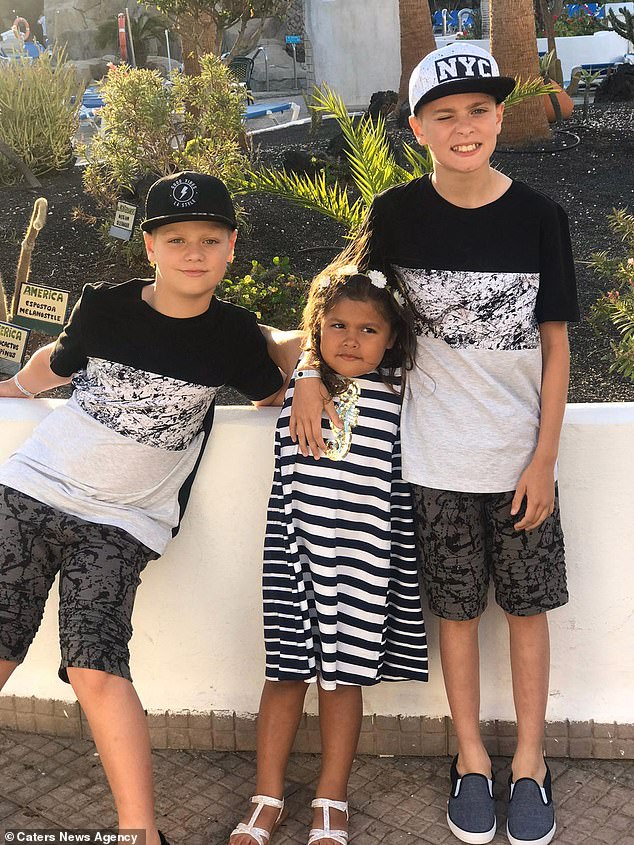 Sophia and husband Chris, 42, a recruitment manager have always noticed a difference in the way their daughter is treated compared to her sons. Pictured, the siblings together

‘Despite my children being raised in the exact same way, in the same home, with the same opportunities, no fault of her own, our daughter will just be treated differently.

‘She was born with a ‘tan’ and when we brought her home and introduced her to our family, people would just say “isn’t it funny that she is black and the boys aren’t?”

‘People find it really hard, asking questions like “why is she black?” – I’d say “because I am black.”

‘I remember I was in a playground with the boys and there was a dad with a boy the same age as Fin. 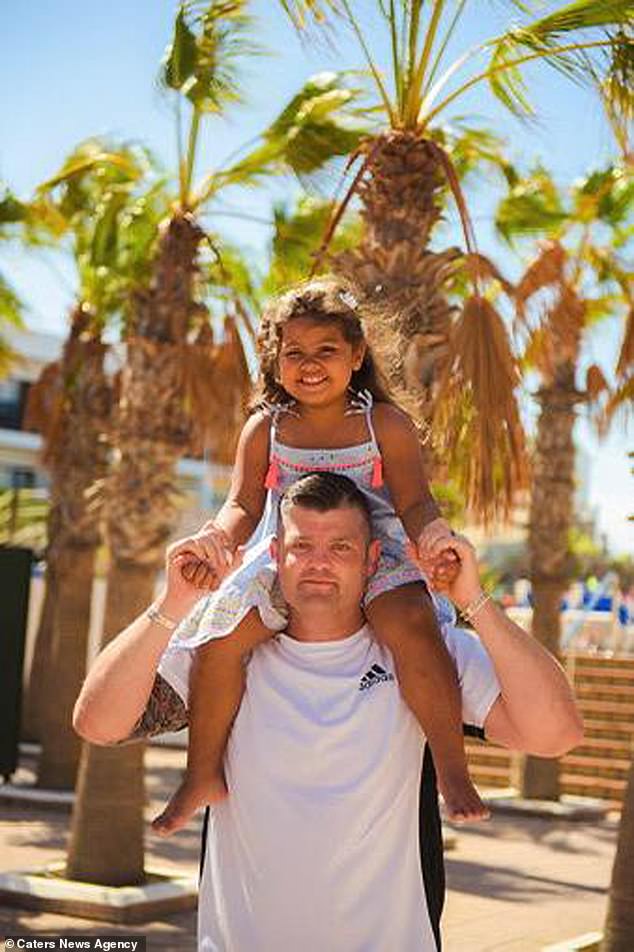 The couple have finally decided to speak out about the racism Flossy faces – including being called ‘chocolate face’ at preschool. Pictured, Chris and daughter Flossy 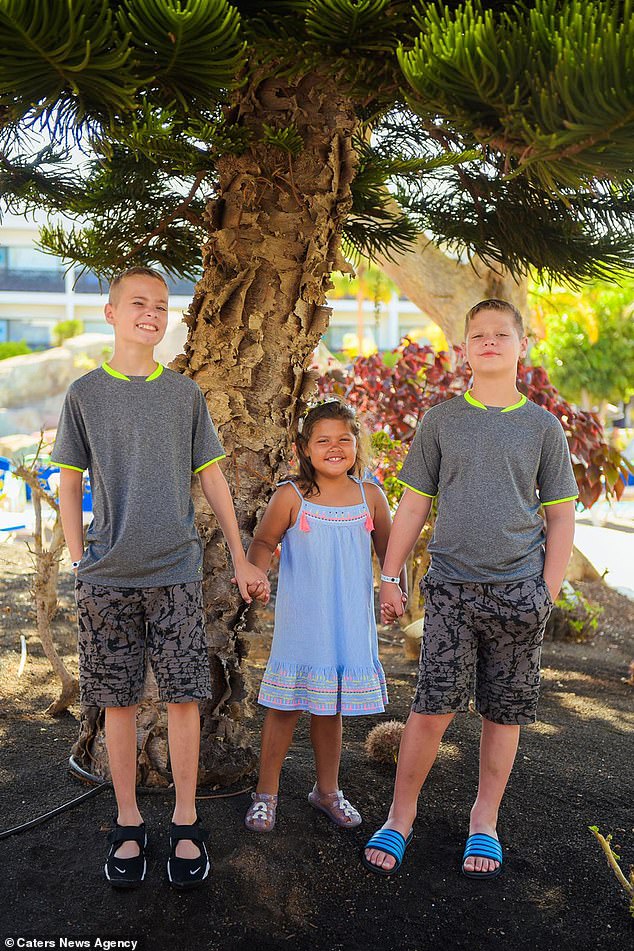 Sophia says that people often assume the boys are her husband’s and Flossy is hers. Pictured, the children together

‘He asked me if I am a childminder and I said “no, that’s my son” – I wasn’t bothered about it because it happens all the time, people are shocked my sons are white.

According to The British Society for Human Genetics, different genes control skin colour in a similar way to eye and hair colour.

Spokesperon Dr Jess Buxton said: ‘Children from the same parents only share about 50 per cent of their genes.

‘If one parent has several “light skin” gene variants and the other has several “dark skin” variants, then their children can have a skin colour anywhere in between, depending on which combination of variants they receive.

‘This is a random process, so it is certainly possible for the same parents to have children with different skin colours, although because we don’t know all of the genes involved it isn’t possible to predict when this will happen.

‘There is still a lot we don’t know about individual genes and how they govern characteristics.’

‘He said “oh that’s really funny” and turned to his son and said “Why don’t you play with the little brown boy who is not brown?”

‘I was thinking why would you even say that, he is two-years-old.

Sophia continued: ‘People assume the boys are my husband’s and Flossy is mine, they ask me “do the boys see their birth mum?” and I tell them “yes, they live with me”.

‘People ask us if the boys are adopted- as a parent you just answer the questions and you keep moving but looking back I think ‘that was really inappropriate’.

‘When Flossy was born the boys just asked why she is a different colour- I told them because she looks more like me and you look more like daddy and that’s it.

‘They said “oh ok” and have never really mentioned it again.

‘It’s the little things like at school discos, people would ask me “is she twerking?” – I ‘d say “no, she’s four, she’s just shaking her bum”, that’s what four years olds do.

‘She is oblivious at the moment but she was upset about the chocolate face thing.’

And while she has experienced discrimination herself, she wants to raise her daughter to have her own voice and be confident about who she is.

Sophia, an entrepreneur who set up a national chain of exercise classes for expectant and new mums, added: ‘I was told by a man in the bus that if it weren’t for him people like me wouldn’t be allowed into the country.

‘Three years ago I went to exchange a toy for my kids, it was raining, I was wearing tracksuit and I had my hood up. 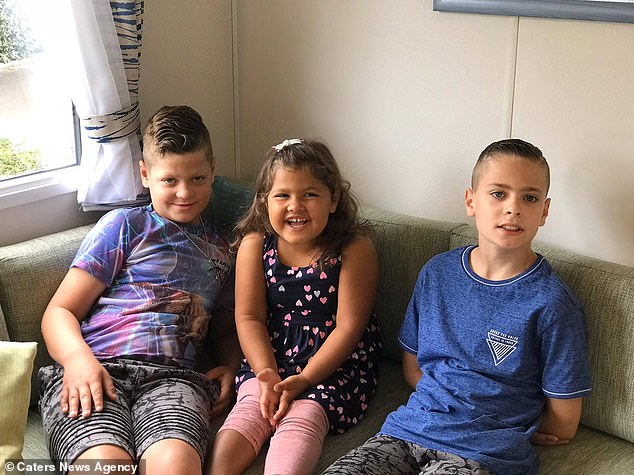 When Flossy was born, the boys just asked why she was a different colour – and Sophia told them it was because she looked more like her, while they look more like their daddy. Pictured, Flossy, Fin and Maxwell 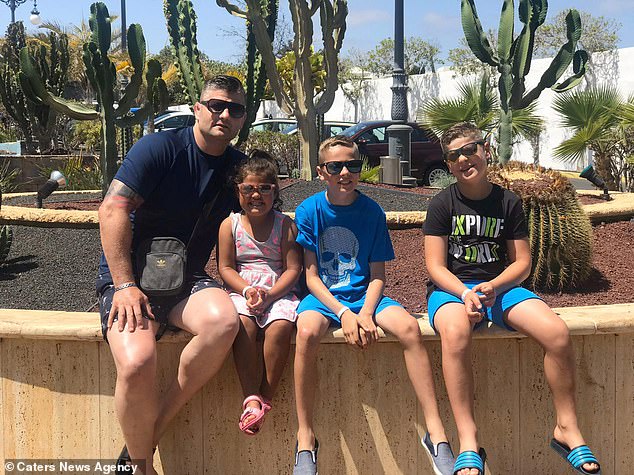 Sophia is concerned every day that Flossy won’t get the same opportunities as the boys. Pictured, Chris Cooper and his kids – Flossy, Fin and Maxwell

‘Somehow I ended up sitting in a small room, accused of shoplifting – they believed the toy I wanted to exchange, I had stolen off the shelf.

‘I had to call the police because they didn’t let me leave- I even offered to pay and they still wanted me to admit that I stole it.

‘I think some of it is ignorance, some of it is unconscious bias – people are born without realising that things like “there is no black in Union Jack” are affecting us. 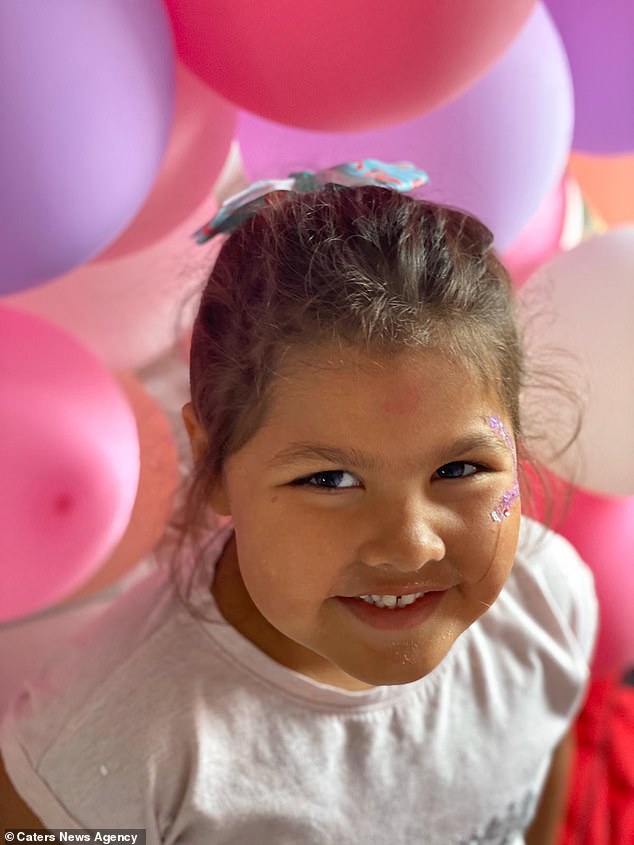 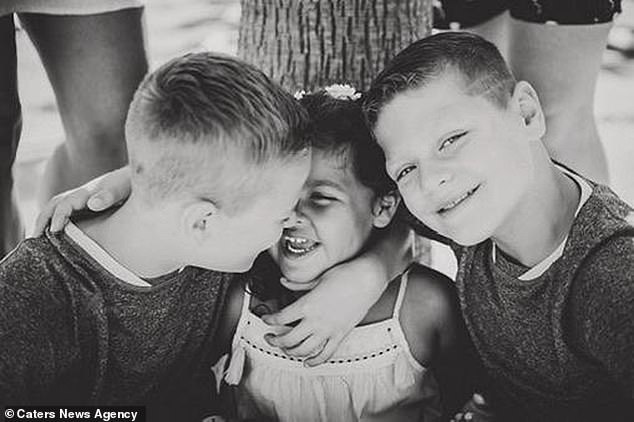 Sophia says from the moment Flossy was born she has noticed the difference in the way people approach her. Pictured, with her brothers

‘Ever since I became a mum I noticed there is so much more that news to be done. Saying ‘we are all the same’ is not really enough anymore because that is not changing things.

‘I feel like as you get older you lose your voice, I know I have felt intimidated or like it’s not my place to talk but I want to make sure we do a good job in being a role model for her to be confident and vocal about her colour.

‘I don’t think this started with George Floyd, I have noticed ever since the Brexit campaign started, it has increased the amount of racism or unconscious bias I have received. People who think this happens only in America are so naive.

‘I am concerned every day Flossy won’t get the same opportunities as the boys – if a woman of colour raises her voice, we are told we are “feisty” but when a white woman does the same she is bold or courageous.’

‘Either its the boys getting higher salaries, or Flossy not getting interviews for jobs because companies checked on her social media and saw she’s black.

‘Flossy is not going to be able to make a change on her own – it takes all of us. ‘