NASA launches interactive map that lets you track of Perseverance

Where is Perseverance now? NASA launches interactive map that lets you track its rover as it begins to explore the surface of Mars

NASA has launched an ‘interactive map’ of Mars that lets you track the Perseverance rover as it begins its exploration of the Jezero crater on the Red Planet.

Perseverance landed on Mars after a nail biting ‘seven minutes of terror’ on Thursday that involved plummeting through the atmosphere at 12,000 miles per hour.

It was a particularly complicated landing as the area in the crater is littered with jagged rocks and obstacles, requiring thousands of lines of code to allow the rover to negotiate the complicated terrain without human input.

To allow people to continue tracking the location of the rover, nicknamed ‘Percy’ as it trundles along at 152 meters per hour (0.09mph), NASA released a live map.

The landing area is marked with a blue ellipse and the rover is a light blue pin. As Perseverance moves throughout the landscape, you’ll be able to track its location. 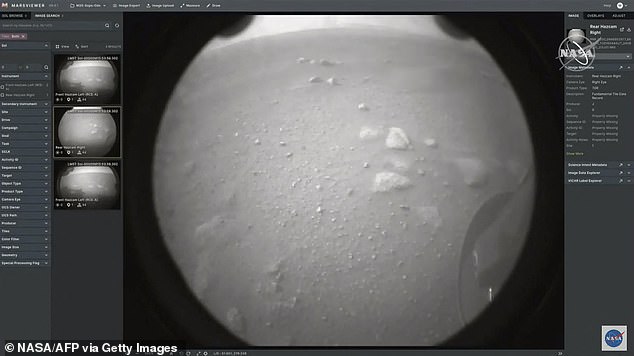 NASA has launched an ‘interactive map’ of Mars that lets you track the Perseverance rover as it begins its exploration of the Jezero crater on the Red Planet.

The interactive map is made up of two layers: a grayscale Jezero Crater map created with images from the HiRISE camera on the Mars Reconnaissance Orbiter, and a true-colour base map taken by the ESA Mars Express camera.

The goal of the Perseverance mission is to seek out signs of ancient life and collect samples of rock and dust for a possible future return to Earth.

The car sized rover will slowly trundle around the crater over the next few years, taking images, gathering data and placing rock samples in tubes. 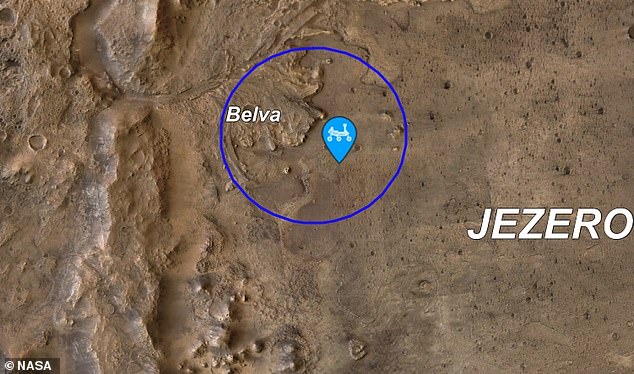 To allow people to continue tracking the location of the rover, nicknamed ‘Percy’ as it trundles along at 152 meters per hour (0.09mph), NASA released a live map 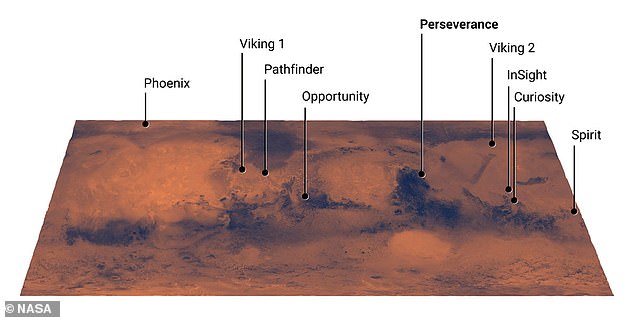 The goal of the Perseverance mission is to seek out signs of ancient life and collect samples of rock and dust for a possible future return to Earth. It is the 9th NASA lander on Mars

By the end of the decade another rover, the European Space Agency Fetch vehicle, will be sent to Mars to gather those tubes and return them to Earth.

For the interactive map there is some ‘not true’ colour processing applied to highlight key surface features to look for within the crater.

‘A high-resolution Digital Elevation Model was created from the images to provide critical information for rover drivers, who need to know how steep the hills are as they plan a path forward through this rocky terrain,’ the agency wrote in a blog. 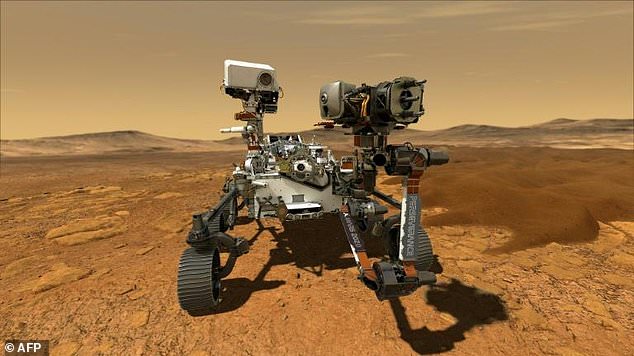 NASA’s Perseverance rover will attempt to collect 30 rock and soil samples in sealed tubes, to be eventually sent back to Earth sometime in the 2030s for lab analysis

‘Engineers created this experience with software used by the mission team who decide where Perseverance will explore, and how to get there.

‘Each dot represents the end point of a drive and is labeled with the day, or sol, on Mars, that the rover stopped.’

This means you’ll not only be able to see where the rover is at that moment, but also monitor where it has been and how far it has travelled.

At just 0.09 miles per hour, it is unlikely the $2.2 billion rover will get very far, but speed and distance aren’t its purpose – it is there as an astrobiology lab. 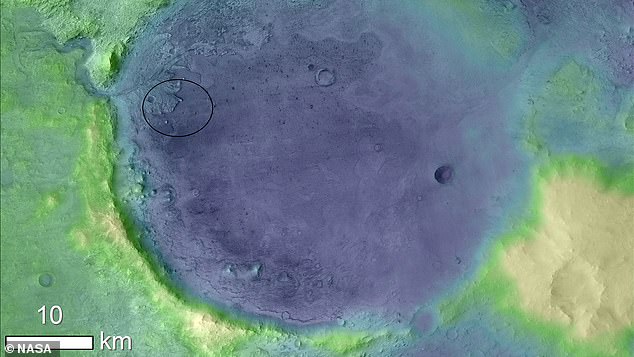 NASA has sent a number of orbiters to Mars, which allowed them to find Perseverance’s target – the 28-mile Jezero Crater (pictured). The Jezero Crater is thought to be an extinct lake and is also close to curious rock formations, all of which are of great scientific interest back on Earth 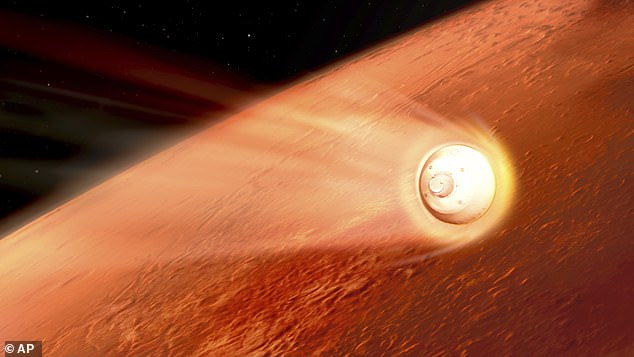 The spacecraft carrying the rover separated 10 minutes before atmosphere entry and Perseverance then entered Mars’ atmosphere at around 12,000 miles per hour — quick enough to travel from London to New York in 15 minutes 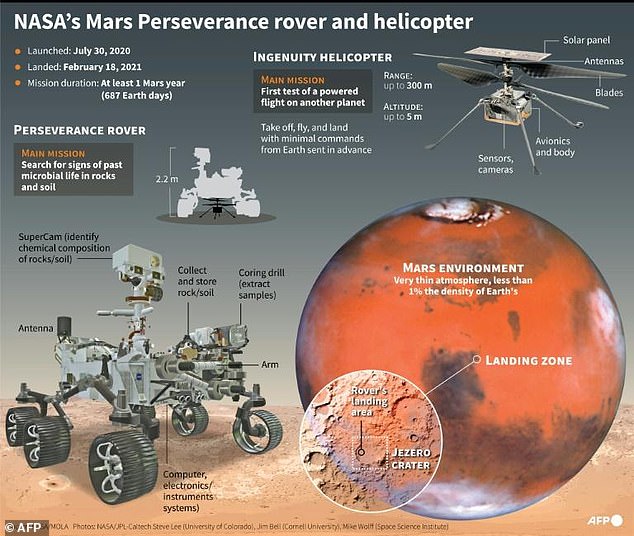 JEZERO CRATER: ONCE HOME TO A ROARING RIVER DELTA

NASA picked the Jezero crater as the landing site for Perseverance out of more than 60 candidate locations. 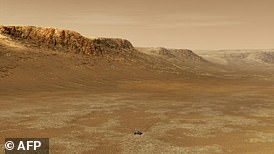 Scientists believe that around 3.5 billion years ago, the Jezero Crater was home to a river that flowed into a lake, depositing sediment in a fan shape known as a delta

They spent five years studying the potential sites – each with its own unique selling points – before settling on Jezero due to its link to a wet Mars.

Jezero tells the story of the on-again, off-again nature of Mars’ wet past.

Over 3.5 billion years ago river channels spilled over the crater walls, creating a lake.

There is evidence water carried clay minerals from surrounding area into the crater lake.

This means that microbial life ‘could have’ lived in the Jezero crater during one of these wet periods.

If so then signs of their remains could be found in lakebed or shoreline sediments due to be studied by the rover over the coming years.

Just before 21:00 GMT on Thursday the rover safely landed on the Red Planet and sent back images, marking an ‘amazing accomplishment’.

Perseverance’s twitter account marked its arrival on Mars, tweeting that it had landed safely, and posting pictures from the rover of it’s ‘forever home’.

The arrival of this image, and second taken from behind the rover, showing a flat, rocky surface, was met with a round of cheers from mission control.

More images, videos and sounds from the landing and the Jezero crater are expected to start arriving from the rover over the weekend.

The Jezero crater where Perseverance landed is a 28 mile wide depression that contains sediments of an ancient, long-dried up river delta.

Early indications suggest Perseverance landed on a relatively flat surface, and not too far from sand dunes which will have to be navigated in order to reach the delta.

Images from NASA showed the rover had landed in tiny safe space, surrounded by red areas that would have been very difficult to land in.

Scientists know that 3.5 billion years ago, Jezero was the site of a large lake, complete with its own delta.

They believe that while the water may be long gone, somewhere within the crater, or maybe along its 2,000-foot-tall (610 metre) rim, evidence that life once existed there could be waiting.

At each stop along the way Perseverance will be performing a number of science experiments and sending data back to Earth for scientists to review.

Thanks to the new tracking map, Percy fans sitting at home can also monitor where the rover is, has been and is going in the future.

In May the Chinese space agency will be landing the Tianwen-1 rover on the Red Planet, if successful, becoming only the second nation to have a rover on Mars.

They will be joined in 2023 by the British-built, European Space Agency Rosalind Franklin rover, that will compliment efforts to find signs of ancient life.

NASA MARS 2020: THE MISSION WILL SEE THE PERSEVERANCE ROVER AND INGENUITY HELICOPTER SEARH FOR LIFE

NASA’s Mars 2020 mission will search for signs of ancient life on on the Red Planet in a bid to help scientists better understand how life evolved on Earth.

Named Perseverance, the main car-sized rover will explore an ancient river delta within the Jezero Crater, which was once filled with a 1,600ft deep lake.

It is believed that the region hosted microbial life some 3.5 to 3.9 billion years ago and the rover will examine soil samples to hunt for evidence of the life.

Perseverance landed inside the crater and will collect samples that will eventually be returned to Earth for further analysis.

A second mission will fly to the planet and return the samples, perhaps by the later 2020s in partnership with the European Space Agency.