The Senate is pushing for the Pentagon to provide better combat equipment for female troops through a bipartisan effort known as the Female Body Armor Modernization Act.

The Female Body Armor Modernization Act, first introduced in December 2019 by Armed Services Committee members Sens. Tammy Duckworth, D-Ill., and Joni Ernst, R-Iowa, would direct the Pentagon to coordinate their efforts with other government agencies to equip women with body armor and other personal protective equipment in order to reduce injuries related to ill-fitting gear.

"When I was serving overseas, I experienced firsthand how our military’s body armor and protective equipment hasn’t always been constructed with the health and comfort of female servicemembers in mind,” Duckworth said regarding the provision. “That’s one reason why I’m proud my bill to enhance troop readiness by helping make sure our female service members are properly equipped for combat was included this bill, and I look forward to it becoming law."

The measure would require the Services to submit reports to Congress regarding any barriers faced in fielding the new equipmenet to service members, such as cost overruns or contractor delays. The Defense Health Agency would also be required to maintain a database that would track gear-related injuires and submit a report to Congress in fiscal year 2025 identifying "the prevalence of preventable injuries attributed to ill-fitting or malfunctioning PPE."

In addition, the Department of Defense would be required to include questions in its annual Periodic Health Assessment on the nature and prevalence of injuries attributed to ill-fitting or malfunctioning PPE.

"Women serve in critical roles within our nation’s military so we need to make sure our female servicemembers are properly equipped for the battlefield," Ernst said in a statement on Friday. "Through my efforts, and that of my fellow Army combat veteran, Democratic Senator Tammy Duckworth of Illinois, this defense bill ensures female troops will have body armor that fits them properly and requires the Pentagon to regularly report to Congress their progress in getting this done."

According to data released by the Government Accountability Office in May, the Air Force has the highest percentage of female active-duty service members (20.2%), followed by the Navy (19.6%), the Army (15.1%), and the Marine Corps (8.6%). 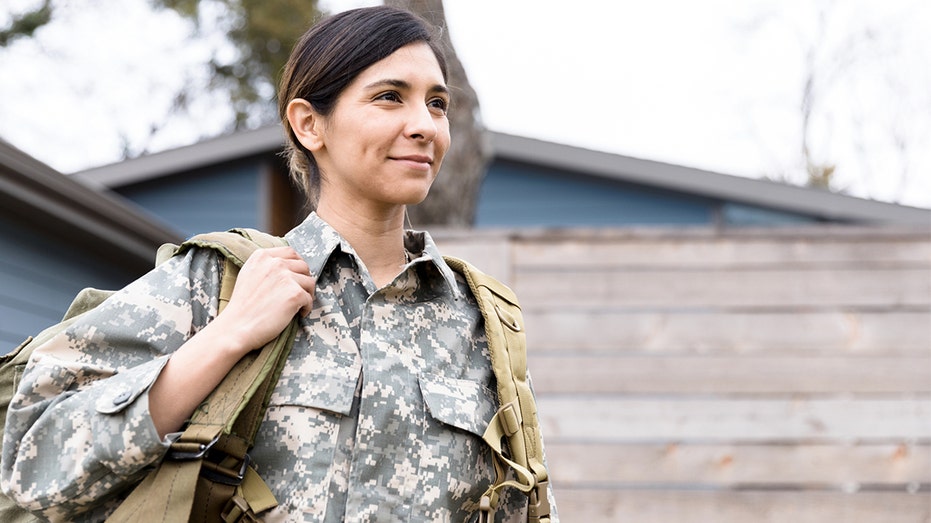 A portrait of a female soldier carrying her gear as she leaves her home for the deployment. (iStock)

The Female Body Armor Modernization Act is one of multiple provisions included in the 2021 National Defense Authorization Act, a $740 billion defense spending bill, which also includes the second consecutive 3% pay raise for service members and hazard pay for troops responding to the coronavirus pandemic.

Other provisions in the bill include a measure that would allow Congress to withold funding for troop reductions from Afghanistan until the Pentagon and other agenices submit a report to Congress detailing how the move could impact U.S. national security and other issues as well as a measure that would prevent troop reduction from Germany until 120 days after the secretary of defense formally assesses it for Congress.

The bill passed in the Senate on a bipartisan vote of 84-13 last week, following passage in the House of Representatives by a vote of 335-78. House Speaker Nancy Pelosi signed the NDAA and sent it to the White House on Friday, beginning the 10-day clock, excluding Sundays, for a veto or approval from President Trump.

Trump has expressed opposition to the legislation due to the fact that it would remove the names of Confederate generals from military bases and because it does not repeal Section 230, which would strip social media companies like Twitter and Facebook of liabiliity protections.

Press secretary Kayleigh McEnany told reporters during a White House press briefing Tuesday that Trump "does still plan to veto the NDAA", but noted that there is no specific timeline as to when that could potentially happen.

The president has until Dec. 23 to make his decision. If a veto is issued, the Senate would likely be forced to return between Christmas and New Year's for a potential override vote. Congress has never overridden one of Trump's eight vetoes and has only overridden the president 111 times in history. A successful veto override requires two-thirds of the votes in both the House and Senate.