Never fight over what to watch again! Netflix launches ‘Play Something’ button that will randomly play TV programmes and films it thinks you’ll enjoy

From Tiger King to The Crown, Netflix is jam-packed full of thousands of TV programmes and films.

While the platform’s selection is undeniably excellent, choosing what to watch can be a tricky task that can lead to heated arguments between couples.

Now, Netflix has launched a new feature called ‘Play Something’ that could help to resolve these arguments.

The tool will select a TV programme or film based on your previous watches and known favourites, and is essentially a ‘shuffle’ button for Netflix. 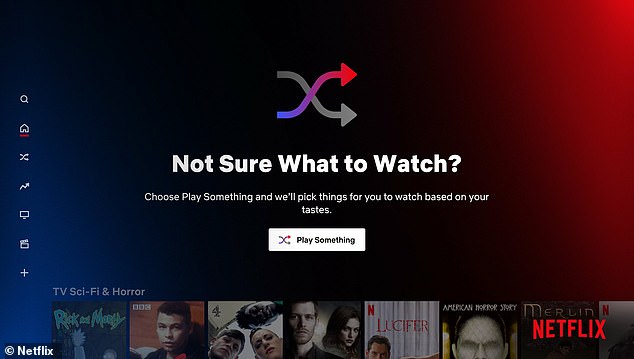 The Play Something tool will select a TV programme or film based on your previous watches and known features, and is essentially a ‘shuffle’ button for Netflix

How to find the Play Something button

The Play Something button can be accessed in multiple ways on your TV: 1. Underneath your profile name

2. The tenth row on your Netflix homepage

3. The navigation menu on the left of the screen

While the tool has been tested with select users since last year, it is now being rolled out to all users globally.

Cameron Johnson, Director of Product Innovation at Netflix, explained: ‘There are times when we just don’t want to make decisions. A Friday evening after a long work week. A fridge full of food but nothing jumps out. A family movie night where no one can agree. We’ve all been there.

‘Sometimes you just want to open Netflix and dive right into a new story. That’s why we’ve created Play Something, an exciting new way to kick back and watch.’

The Play Something button can be accessed directly under your profile picture when logging into Netflix, in the left-hand menu within the app itself, or in the tenth row on your Netflix homepage.

When you tap it, you’ll instantly be met with a TV series or film based on what you’ve watched before.

And if you’re not happy with Netflix’s selection, simply tap the button again to be offered an alternative option.

‘When finding your next story, let the story find you,’ Mr Johnson added.

‘Whether you’re in the mood for a new or familiar favourite, just “Play Something” and let Netflix handle the rest. Easy.’

The Play Something button can be accessed directly under you profile picture when logging into Netflix (pictured), in the left-hand menu within the app itself, or in the tenth row on your Netflix homepage

When you tap the Play Something button, you’ll instantly be met with a series or film based on what you’ve watched before

Netflix is testing a feature that asks viewers to verify that they share a household with the account holder, the company said on Thursday, a move that could lead to a clampdown on sharing of passwords.

A small number of Netflix users are receiving a message asking them to confirm they live with the account owner by entering details from a text message or email sent to the owner.

‘If you don’t live with the owner of this account, you need your own account to keep watching,’ the message says.

Users are then prompted to use a code texted or emailed to the account owner to continue. Viewers can delay the verification and keep watching Netflix.

But the message may reappear when they open Netflix again, and eventually they could be required to open a new account to continue streaming.

The launch of the new feature comes shortly after Netflix’s shares plummeted more than 10 per cent, with just four million new subscribers in the first quarter of 2021.

Roughly 3.98 million people signed up for Netflix from January through March – four times down on the same period last year.

The firm has blamed delays in the production of TV shows and movies during the pandemic.

‘We believe paid membership growth slowed due to the big Covid-19 pull forward in 2020 and a lighter content slate in the first half of this year, due to Covid-19 production delays,’ executives said alongside the latest earnings release.

However, experts believe that the decrease in subscribers is likely due to a number of factors, including the easing of lockdown measures in both the UK and US, and the recent hike in subscription prices.

Uswitch.com’s streaming and TV expert, Nick Baker, said: ‘Netflix has been a lifeline for many people during lockdown, so this price rise is an unwanted extra expense for households feeling the financial pressure.’

He said the ‘chickens were coming home to roost’ for Netflix, with subscriber numbers growing more slowly as people come out of lockdown and watch less TV.

‘The next few years will be a battle to win each and every viewer,’ he added, in part due to increased competition from Disney and others, with ‘quality content’ a deciding factor.

Meanwhile, Netflix is scraping the barrel for content to entice subscribers to sign up, with few new films or TV programmes announced, aside from Prince Harry and Meghan’s new documentary.

However, the firm said they would spend more than $17 billion (£12.2 billion) on content for the platform over the next 12 months – three times the total BBC budget.

WHAT ARE THE VIDEO STREAMING OPTIONS AVAILABLE TO UK CUSTOMERS?