York may be on everyone's minds, but there's a competitive weekend live on the box to sift through first. Our man Callum Jamieson takes a closer look. 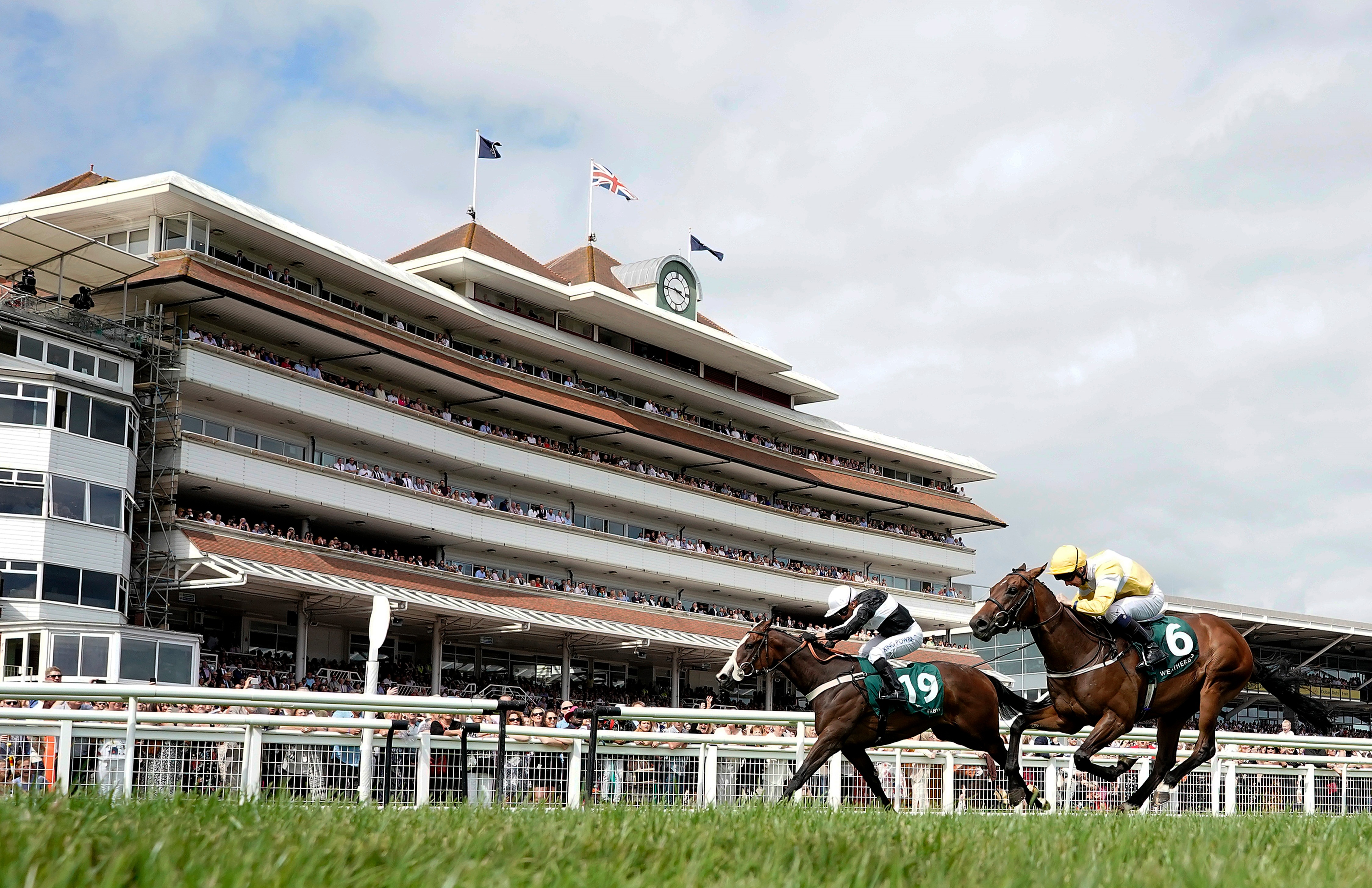 T&Cs: New customers only. Place your FIRST bet on any sportsbook market and if it loses we will refund your stake in CASH. Max refund for this offer is £20. Only deposits made using Cards or Apple Pay will qualify for this promotion. T&Cs apply. Paddy's Rewards Club: Get a £10 free bet when you place 5x bets of £10+.

Guru made a very impressive start to his career when a debut winner over this course and distance last month.

But given connections he's been well found in the betting and with only the one run under his belt, I'm inclined to look elsewhere.

Eve Johnson Houghton looks to have a formidable team of juveniles this season and in JUMBY she may have one of her best.

He ran to a very similar level when winning at Ascot beating some respected rivals in good fashion.

If he can kick on from his debut he should be a big player in this at a much bigger price.

Charlie Appleby's Dhahabi has to be feared. Another debut winner, he got the job done when well-backed on the July Course at Newmarket.

Nothing has run from that race since so it's hard to weigh up what he achieved, but the Appleby yard tend to know when they have a good youngster. So as always, pay close attention to the betting.

Saint Lawrence leads the way on form but has found one or two too good in recent starts and may be vulnerable again.

William Bligh was punted off the boards at Goodwood but plenty went wrong for him. He could be an each-way play.

The ground may play an important role in this race, and some towards the top of the market may be vulnerable with some cut in the going.

Afaak is a regular in these types of races and on any given day can put in a big showing. He prefers it quick though, and can be passed over.

Tempus would be high on the shortlist, especially with Roger Charlton's form, but the feeling is that he may need this run. He's one to keep an eye on for the remainder of the season.

Preference is for David O'Meara's ORBAAN who will be hoping for as much rain as possible before the off.

O'Meara does well with horses such as this, brought over from France, and they tend to steadily progress through the handicap.

He has to lumber top weight in this, but should have his conditions and could well go onto bigger and better things before the season is out judged on his York win two starts back.

It's still early days with him and O'Meara will have bigger pay days in the back of his mind for this horse. His class should see him through.

The lightly-raced Jahbath has to be a threat. But he's clearly been tricky to keep on the straight and narrow and off a mark of 99 will need to be A1 here.

Prince Of Harts needs a good market check on his first start for new connections. King Carney is also interesting in favoured conditions and back in a handicap getting a weight for age allowance.

The quickly improving ALIGNAK is my idea of the winner of this for the Sir Michael Stoute team.

He was pitched into Listed level last time despite being in a great position to notch a couple of handicaps and he was far from disgraced.

He pulled well clear with the winner Trueshan and it was by far a career best.

He was arguably just done for a bit of toe late in the day and staying looks his game. Therefore this extra distance should suit, even if it's far from guaranteed in his breeding.

Stoute has his team in terrific form and I expect him to win this and topple the jolly Morando.

Andrew Balding's horse was the beaten favourite in this last year and while he should get his preferred conditions again, might just be vulnerable to an improver.

Alan King's Tritonic has to be respected. He will have a good line on his chances up against Alignak with his stablemate Trueshan closely matched on that one.

The three-year-olds get 10lbs, but surprisingly don't have the best record in this race. He'll need to kick on from his Hamilton second but that is far from ruled out. His odds reflect his chances.

Communique has been disappointing this season and why you can never rule out a Mark Johnston horse, he's best watched for now.

Sextant has won fresh in the past and needs respecting while the lightly-raced Hukum has questions that need answering if the ground comes up genuinely soft.

T&Cs: New customers only. Place your FIRST bet on any sportsbook market and if it loses we will refund your stake in CASH. Max refund for this offer is £20. Only deposits made using Cards or Apple Pay will qualify for this promotion. T&Cs apply. Paddy's Rewards Club: Get a £10 free bet when you place 5x bets of £10+.

THREAT has been underestimated by plenty after his no show in the July Cup, but I expect him to bounce back here, even if I was hoping for a bigger price.

He was never given a fighting chance at Newmarket and eased off late on.

This race should be much more up his street. The trip is probably his preferred one, and it's much calmer waters than the July Cup.

He gets weight as a three-year-old and why Oisin Murphy deserts him, Pat Dobbs has won on him before. He looked a standout at Newmarket and he could well win this if turning up in proper nick once again.

Dream Of Dreams is the obvious danger. He finishes his races well at six furlongs and the step up to seven makes obvious appeal.

That said, the horse doesn't win anywhere near as often as it should and tends to find trouble. He's short enough for my liking.

Surf Dancer is completely unexposed and improved in a big way to win cosily at York. This demands more again, though.

Pierre Lapin has plenty to prove now, while Symbolize needs to find plenty of improvement.

Last year's winner Glorious Journey is a danger, but has to give away plenty of weight.

Related News:
TV and Movies
Sunny Hostin Says Megyn Kelly Has 'Changed' Since They Worked Together at Fox News
Tyra Banks Hits Back at Trolls Following Criticism Over ‘DWTS’ Flubbed Lines
Ratings: 'The Masked Singer' Season 4 Premiere Sinks 44% From Last September's Season 2 Start
Hulu Apologizes for Promoting Breonna Taylor Doc amid Indictment News: 'The Wrong Call'
'Big Brother 22': Fans Are Living for Zingbot's Diss Toward Nicole Franzel
Recent Posts
This website uses cookies to improve your user experience and to provide you with advertisements that are relevant to your interests. By continuing to browse the site you are agreeing to our use of cookies.Ok