Houston Texans quarterback Deshaun Watson has been accused of sexual or civil assault by seven more women, according to lawsuits filed this week in Harris County. One of the women, who claims Watson exposed himself to her and forced her to touch his genitals during a massage, accused him of being a “serial predator.”

Over the past two weeks, 14 women — all service workers in the health and wellness industry — have said they were assaulted by Watson after he hired them for a massage during separate incidents in 2020 and 2021. An attorney for Watson has called the seven lawsuits filed last week “meritless,” and told CBS News on Tuesday that “any allegation that Deshaun forced a woman to commit a sexual act is completely false.”

Two of the 14 women are suing Watson for sexual assault. In one lawsuit, a woman alleges that Watson, 25, forced her to perform oral sex on him during a December 2020 massage. The woman claims that after Watson “aggressively started dictating the massage and where he wanted Plaintiff to touch him on his body,” he began “forcefully telling her to move her hand down to his pubic area” before forcing her to perform oral sex on him.

The lawsuit says the victim “blacked out” for a few minutes out of fear during the encounter, and was “confused” and “terrified.” 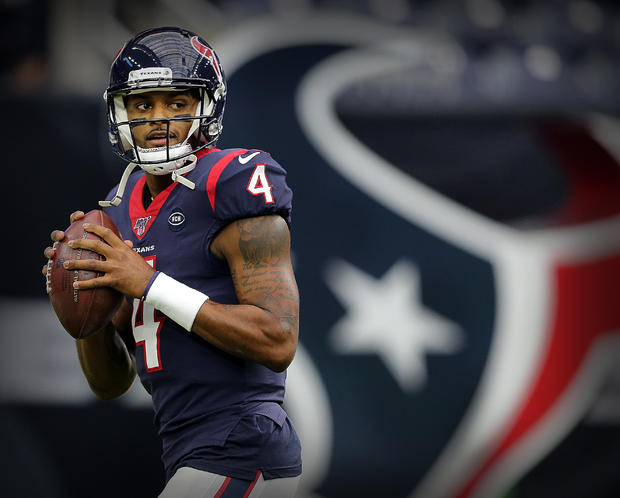 The other sexual assault lawsuit claims Watson exposed himself and asked a woman to massage his genital area during an August 2020 massage. Watson then allegedly forced the woman to perform oral sex on him, wrapped his legs around her neck, and told her to perform more sexual acts.

In the other 12 lawsuits, women allege similar experiences of Watson exposing himself, aggressively directing them to touch inappropriate areas of his body, and in some cases, touching them with his genitals. In those suits, Watson faces charges including civil assault and intentional infliction of emotional distress.

In multiple instances, Watson is accused of making threatening remarks to the women to prevent them from coming forward. After an incident in which Watson allegedly exposed himself and touched a woman’s hand with the tip of his penis, he’s accused of telling her, “I know you have a career and a reputation, and I know you would hate for someone to mess with yours, just like I don’t want anyone messing with mine.”

One attorney, Tony Buzbee, is representing all 14 of the women. Buzbee said this weekend that he planned to turn evidence over to the Houston Police Department and would request a grand jury review the allegations, according to CBS affiliate KHOU.

When Buzbee announced that he had filed the first of the lawsuits last week, Watson issued a statement denying he had ever treated a woman with “anything other than the utmost respect.”

In a statement to CBS News on Tuesday, Watson’s attorney said he believes that “any allegation that Deshaun forced a woman to commit a sexual act is completely false.”

The attorney also said he had “strong evidence” the claim Watson forced a woman to perform oral sex on him during the December massage is “completly false.” The attorney provided a statement from Watson’s marketing manager, who claims he spoke with a person who he believes to be the plaintiff in that case in January 2021.

The marketing manager alleged the plaintiff admitted she had a consensual encounter with Watson, but asked for $30,000 for “indefinite silence” about her encounter. The manager said he did not provide the money.

The NFL is investigating the allegations. The Texans said the team will stay in “close contact” with the league and will “continue to take this and all matters involving anyone within the Houston Texans organization seriously.”