Noel Fitzpatrick thought he would die during second Covid-19 battle

Supervet Noel Fitzpatrick, 53, reveals he feared he ‘would die’ during second Covid-19 battle and says he was ‘paralysed with muscle and joint pain’

Supervet Noel Fitzpatrick has revealed he thought he would die as he battled Covid-19 for a second time earlier this year.

The Irish veterinary surgeon, 53, first overcame the virus in March last year, but caught it once again in February, receiving a positive test result on the same day he was called for his vaccine.

Appearing on This Morning today from his practice in Surrey, he said he was ‘paralysed with muscle and joint pain’ and warned the public to ‘be careful and respectful’ as lockdown restrictions in England eased today.

The vet credited his cat Ricochet and dog Ciara with helping him through the illness, saying that it was his love for his pets that inspired him to ‘keep going’. 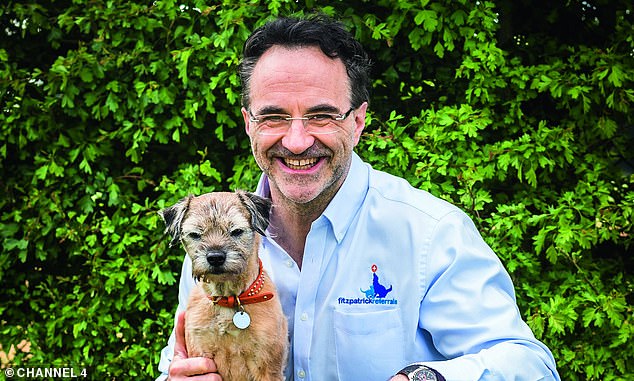 Supervet Noel Fitzpatrick, pictured on his Channel 4 show with pooch Ciara, revealed he thought he would die during his second battle with Covid-19 earlier this year 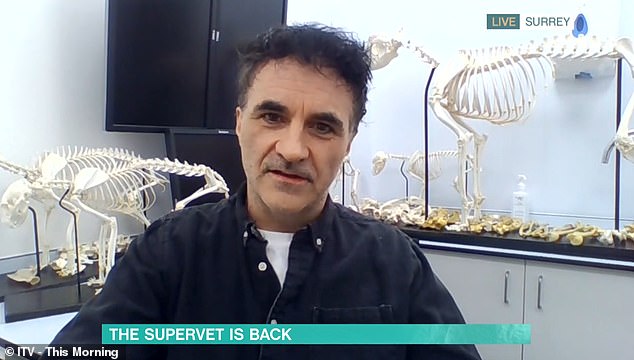 The Irish veterinary surgeon, 53,  revealed on This Morning how he overcame the virus in March last year, but caught it once again in February

He explained: ‘I had Covid last March and again I had Covid just a few weeks ago and I thought I was going to die.

‘This time was real tough. I was like paralysed with muscle and joint pain, and just as a warning to people out there be careful, be respectful, we’re not out of it yet.’

He advised those struggling with their mental health to consider adopting a rescue animal, as long as they have the capability to look after them properly after lockdown.

He explained: ‘When I was lying in bed three weeks ago and I thought I was going to die, when Ricochet held my hand and Ciara looked up at me, I felt like I wanted to keep going.’ 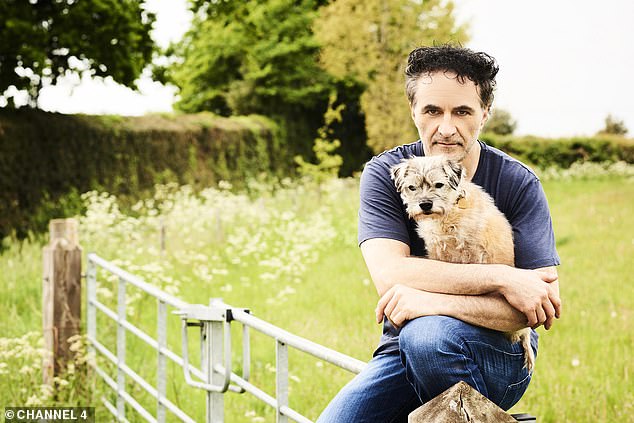 The vet credited his cat Ricochet and dog Ciara (pictured) with helping him through the illness, saying that it was his love for his pets that inspired him to ‘keep going

CAN YOU CATCH COVID-19 TWICE?

Early on in the pandemic, scientists were baffled as to whether or not you could catch Covid-19 twice. Now the evidence is more convincing, following a string of reports of re-infections all over the world.

With some illnesses such as chickenpox, the immune system can remember exactly how to destroy it and becomes able to fend it off if it ever tries to enter the body again.

Tests have shown that many people who recover from Covid-19 have antibodies – which can produce future immunity – but it is not known whether there are enough of them.

However, antibodies are only one type of substance that can produce immunity. The immune system is a huge web of proteins that have different functions to protect the body against infection.

Others, including white blood cells called T cells and B cells, can also help the body to fight off disease but are more difficult to discover using currently available tests.

Evidence is beginning to suggest that antibodies disappear in as little as eight weeks after infection with the coronavirus, scientifically called SARS-Cov-2.

On the other hand, T cells – which target and destroy cells already infected with the virus – are ‘durable’.

A promising study done on monkeys found that they were unable to catch Covid-19 a second time after recovering from it, which led scientists to believe the same may apply to humans.

The rhesus monkeys were deliberately reinfected by scientists in China to test how their bodies reacted.

Because the coronavirus has only been known to scientists for about 12 months there has not been enough time to study whether people develop long-term immunity.

‘For those who get out there everyday and walk their dogs and it gives them mental wellbeing, I cannot encourage you enough to get a wonderful animal friend.’

The TV vet appeared on the programme to promote an upcoming live virtual event, based on his memoir How Animals Saved My Life – which details how his pooch Ciara helped him recover from a deep depression.

He said that he’s seen ‘collective trauma and grieving and depression’ among his clients, and will explore how to ‘get through these difficult times’ in his upcoming event.

Noel explained: ‘In this consulting room I see the collective trauma and grieving and depression that goes with lockdown, and we’re coming out now but please be careful. 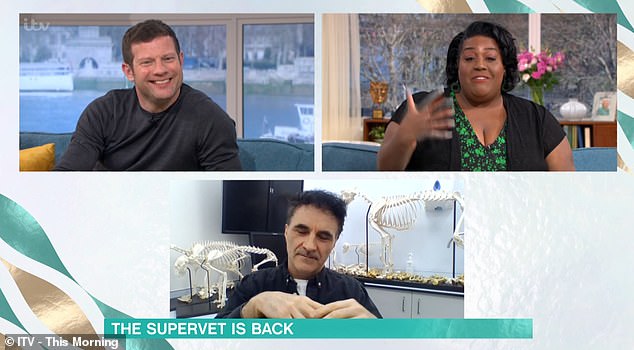 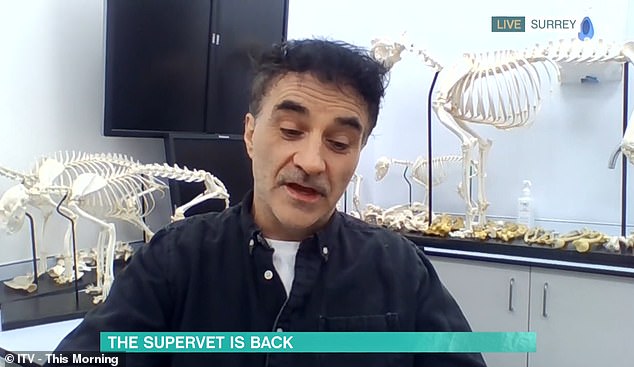 ‘Having Covid and thinking I was going to die like some of the patients in this consulting room, the idea for the virtual chat is how do we deal with that, what values do we have collectively to get us through these difficult times.’

Earlier this month Noel revealed he’d  been fighting an ‘exhausting’ battle with the virus for the last few weeks.

The ‘Glorious Twelfth’: What can you do from today? (And what do we still have to wait for?)

Until May 17 at the earliest: Gatherings of up to 30 people outdoors, with the rule of six and two-household rule indoors; pubs and restaurants will reopen indoors; and controlled indoor events of up to 1,000 people or 50 per cent of a venue’s capacity, whichever is lower, will be permitted.

Up to 30 people will be allowed to attend weddings, receptions, funerals, and commemorative events, including wakes. Indoor gatherings like exercise classes will be given the go ahead.

Until June 21 at the earliest: All legal limits on social contact will be lifted and nightclubs reopened.

He took to Instagram to thank his fans for their well-wishes and gave an update on his health, saying he got a ‘horrible dose’ of the virus but is ‘over the worst’.

The star of Channel 4’s series The Supervet looked drained as he opened up about his exhaustion following his health battle and urged people to be careful not to contract the virus.

He said: ‘I wanted to reach out and say thank you for your good wishes.Some of you will know I’ve had Covid pretty bad these last couple of weeks.

‘It’s a horrible dose and leaves you very exhausted so I guess what I wanted to say is: ‘We’re not done with this thing and you’ve got to look after each other.

‘You’ve gotta observe the rules, wear your masks and observe social distancing and importantly get your vaccine if you can.’

Noel continued: ‘Because this is a bad disease and it really takes it out [of you] and I can’t emphasise enough that you’ve got to be careful still.’

‘If you can, give your animals a cuddle. That always makes things better but take care of each other.

‘We’re not done till we’re done so do the right thing, look after each other and thank you so much for looking out for me. God bless.’

Noel revealed in his book how fell into a deep depression after being accused of malpractice over his treatment of a tortoise.

He fitted three bionic limbs to a Hermann’s tortoise called Hermes to replace those chewed off by rats during hibernation.

After discussing euthanasia with the owner, he performed surgery, believing Hermes could live another 50 years and because it was done with his ‘best interests in our hearts’.

But a few months later, at the end of 2018, after Hermes died at home of a seemingly unrelated condition, four vets lodged an official complaint.

As the Royal College of Veterinary Surgeons investigated, Noel faced losing his career and was left ‘crying behind closed doors while putting on a smile to face the world’.

In his book released last October, How Animals Saved My Life: Being The Supervet, he said: ‘The complainants maintained I had put self-promotion above my commitment to the health and welfare of my patient and requested a full disciplinary hearing.

‘Depending on the outcome, I could face a suspension or even be struck off, meaning I would no longer be allowed to practice veterinary medicine, which had been the central purpose of my life for as long as I could remember.

As the investigation process began, I sank into a big cloud of depression. And in spite of seeking professional help, it wouldn’t budge.’

After a 14-month investigation, The Royal College of Veterinary Surgeons closed the case after concluding that his actions did not amount to serious professional misconduct.