NSW Swifts let slip a golden opportunity to make up ground on ladder leaders Melbourne Vixens on Saturday after slumping to a shock 13-point defeat to the Queensland Firebirds.

A poor defensive performance was to blame as the second-placed Swifts lost 77-64 to an inspired Firebirds side just hours after the Vixens drew with West Coast Fever. 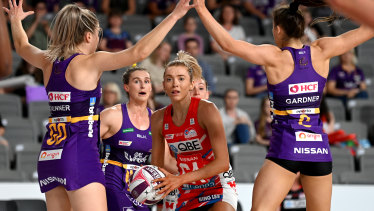 The seventh-placed Firebirds delivered one of their most polished performances in nearly two years, leading all four quarters for the first time since 2018.

It was a contest the Swifts were never in, beginning in a slumber and struggling to match the Queensland side's pace. Firebirds shooter, Romelda Aiken had a field day at the expense of the Swifts defence, nailing 14 of her 15 shots in the opening quarter. While Swifts shooter Sam Wallace enjoyed a perfect first quarter, she was afforded too few opportunities as Firebirds centre Mahalia Cassidy dictated the tempo and had seven assists as Queensland strolled to a 19-12 lead by the first break.

The Swifts struggled moving the ball and playing through the Firebirds defensive structure after the restart. Some more aggressive defending slowed Queensland's progress, forcing turnovers that helped the Swifts get back into the contest.

While Helen Housby and Wallace may have been frustrated with a lack of service, they did their job in the goal circle without a blemish. Yet the defensive frailties remained. Whenever Queensland raised the tempo, the Swifts' defence crumbled as the Firebirds extended their lead to 39-30 at half-time.

Desperate to reduce the deficit, the Swifts threw everything forward and caught the Firebirds off guard at the start of the third quarte. Centre Maddy Proud lead their revival but they were too often vulnerable to turn overs. A late surge in the third quarter from the Firebirds all-but extinguished the Swifts hopes of clawing their way back into the contest. Lara Dunkley was the architect, setting-up a flurry of late goals as the Firebirds set up a 58-48 at the final break.

The Firebirds continued their momentum as their strength in the mid-court made light work off the Swifts in the final quarter. Aiken continued her strong showing in the circle, while Dunkley and Cassidy dominated the mid-court to service the shooters. Their dominant display inflicted a heavy defeat on one of the favourites to win the title this season.

Meanwhile, the Giants go head-to-head with the Sunshine Coast Lightning on Sunday for the first time since Giants defender Kristiana Manu'a was controversially sent-off rough play against the Lightning last month.

The New Zealand-born goal defender was sent off for two strong fouls as the Lightning snared a one-point win two weeks ago. The Giants are desperate to bounce back with a win to keep their finals hopes alive, as they enter Sunday's game eight points adrift of the top four.