He might have taken his time to write it and he might have been comprehensively beaten to publication by his wife, but Barack Obama’s 768-page memoir, A Promised Land, will be on top of the Christmas bestseller charts in Australia and around the world.

The book, which was published on November 18, sold more than 18,000 copies in its first three days here and has now sold more than 71,000 copies, according to Nielsen BookScan, which surveys print book sales from more than 1600 retailers. In the week to December 12, nearly 17,200 copies of A Promised Land were snapped up. It is also number one in Britain and at the top of the New York Times non-fiction list. 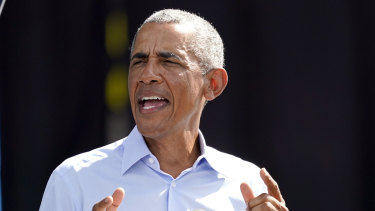 Barack Obama’s book could be the best-selling presidential memoir in the modern era.Credit:AP

But Obama has a way to go before he catches up with Michelle Obama’s Becoming, which has sold nearly 210,000 copies in Australia.

According to his US publisher, Crown, A Promised Land is likely to become the best selling presidential memoir of the modern era. It has sold more than 3.3 million copies in the North American market – the first print run totalled 3 million copies – putting it in reach of Bill Clinton’s My Life and George W. Bush’s Decision Points, both of which hover in the 3.5-4-million range.

Nipping at the heels of Obama in the Australian Christmas list came two Bluey titles, followed by perennially strong performers Anh Do, Andy Griffiths, Lee Child, David Walliams, Jeff Kinney and the inevitable Guinness Book of World Records. In the week the film adaptation of Jane Harper’s novel The Dry had its premiere, she came in at number 10 with her latest crime novel, The Survivors. 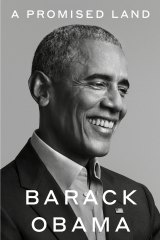 The lead-up to Christmas is always a crucial period for booksellers and publishers, particularly in this pandemic-hit year.

“Australians have spent over $1 billion on physical books so far in 2020,” Nielsen territory manager Bianca Whiteley said. “The market is up 7.5 per cent on the same period in 2019 … Whilst we recorded an initial decline at the start of 2020, this was offset by a strong quarter two and even stronger quarter three sales, with Australian book buyers purchasing an additional $12 million per month on books on average from June onwards.“

Dymocks category manager Kate Mayor said the fact that A Promised Land cost $65 meant it would have a significant impact on the book trade. The number two title, Bluey: Veranda Santa, has a recommended retail price of $16.99.

“Things are more open in Australia now, but there are still challenges ahead. Our CBD stores are trading lower than usual because there aren’t many people working in the offices. But the suburban stores are doing really well.“

Australian Booksellers Association chief executive Robbie Egan said the Christmas season, which normally accounts for between 25-30 per cent of a bookshop’s annual revenue, was this year arguably the most important in his experience.

“At the start of the pandemic I probably thought the worst could happen and we could lose a third of our members. In the US an independent store has been lost each week. But the existential threat has gone. We have proven our resilience.“

Ray Bonner of Bookoccino in Avalon Beach, NSW said Obama’s memoir was selling very well and the Christmas season had been excellent until the announcement of five COVID-19 cases in his neighbourhood.

“Until today it was staggering and then it dropped off the cliff. The news had an immediate effect; it’s very quiet. That COVID thug is a real nasty enemy.”