Olivia Jade Giannulli, the daughter of actress Lori Loughlin, has broken her silence about the college admissions scandal that landed both her parents in prison. The 21-year old influencer appeared on Tuesday’s episode of Red Table Talk to discuss the ordeal.

“I’m not trying to victimize myself, I don’t want pity. I don’t deserve pity. We messed up. I just want a second chance to be like I recognize I messed up,” Olivia Jade Giannulli says.

Jada Pinkett Smith, who hosts the Facebook Watch show with her mother, Adrienne Banfield-Jones, and daughter, Willow Smith, sat with Giannulli to give her an opportunity to share her side of the story.

“I think that this has been a really eye-opening experience for me, and although there’s a lot of negative around it and there’s a lot of mistakes and wrongdoings, it’s led me to have a completely different outlook on a lot of situations,” Giannulli said

Loughlin and her husband Mossimo Giannulli were accused of paying $500,000 in bribes to get their daughters admitted to the University of Southern California by masquerading them as recruits for the crew team. The couple initially denied the charges, pleading not guilty, before eventually pleading guilty to conspiracy charges after a judge denied their motion to dismiss the case. 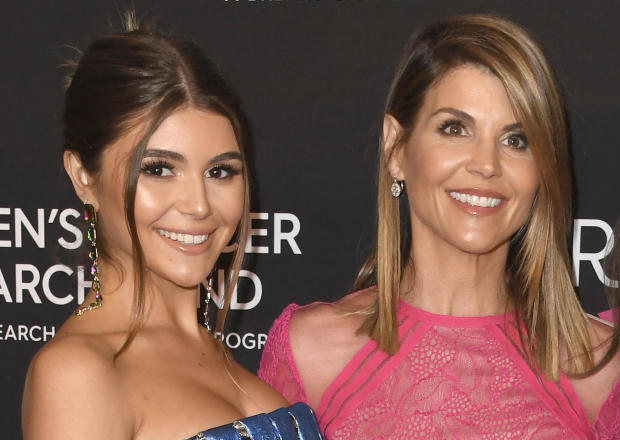 The “Full House” star, who is at a federal prison in Northern California, is expected to be released by Christmas. In the 30-minute episode, Giannulli reveals she has not yet spoken to either of her incarcerated parents and she says it’s been hard having them locked up.

“I think for anybody, no matter what the situation is you don’t want to see your parents go to prison. But also, I think it’s necessary for us to move on and move forward,” she said.

Giannulli said she believes her parents did it because her dad has “attachment” issues and wanted her and her sister, Isabella Rose, to go to school close to home.

“They didn’t have much to say except, ‘I’m so sorry. I really messed up, I was trying to give the best to you and your sister,'” she said.

The YouTube star said that she wants to show the world that she has learned from her family’s mistake, insisting that she “deserves a second chance.”

“What hasn’t been super public is that there is no justifying or excusing what happened. What happened was wrong, and I think every single person in my family can be like that was messed up. That was a big mistake,” she says. “But I think what’s so important to me is to learn from the mistake, not to now be shamed and punished and never given a second chance. Because I’m 21. I feel like I deserve a second chance to redeem myself, to show I’ve grown.”

Giannulli, who was a freshman at the University of Southern California, found out about her parents arrest during spring break. “I never went back, I was too embarrassed,” she said. “I shouldn’t have been there in the first place.” She says she was a hard worker in high school and said that while she did participate in her college application process, there was a lot that she “was not fully aware of.”

In the conversation, the influencer admitted that she was “oblivious” to her privilege and was first confused as to why people were complaining.

“When it was happening it didn’t feel wrong. I was in my own little bubble, focusing on my comfortable world, that I never had to look outside of that bubble,” she says. “A lot of kids in that bubble, their parents were donating to schools and doing stuff with so many advantages.”

“I didn’t realize at the time that that was privilege,” she says. “The picture that has been painted of me is not who I am. I’m not this bratty girl that doesn’t want to change anything.”

In an attempt to change her image, Giannulli reveals she has volunteered at an after school program, to give back to children who weren’t as privileged as herself.

Despite Giannulli’s owning her family’s mistake, Banfield-Jones was not impressed.

“I just found it really ironic that she chose three black women to reach out to for her redemption story,” she told her daughter and granddaughter. “It’s bothersome to me on so many levels. Her being here is the epitome of white privilege to me.”

Smith’s mother later confronted Giannulli about her wanting to share her story on their platform. “I’m exhausted with everything that we have to deal with in our community and I just don’t have the energy to put into the fact that you lost your endorsements. Or you’re not in school right now. Because at the end of the day you’re gonna be okay.”

Addressing her entitlement, Giannulli admitted she was “the poster child of white privilege.”

“It’s embarrassing within itself that I walked around my whole 20 years of life not realizing that you have insane privilege, you are the poster child of white privilege and you had no idea,” she says.

Loughlin and Giannulli were part of an extensive group of parents who used  William “Rick” Singer, the alleged ringleader of the scheme, as a purported college admissions adviser. More than 50 parents and college officials have been accused of participating in the scam, believed to be the biggest college admissions scandal in U.S. history.