Home » Lifestyle » Once upon a pandemic

Once upon a pandemic

Now children, sit quietly and don’t fidget. Uncle Jon has a story for you, a story so fantastic that you will never see the world the same way ever again. It is a sad story, and like most important stories, it teaches us a lesson.

Once upon a time, there was a magic land with the luckiest people in the kingdom, healthy, strong caring people who were called the Victorians. They lived in a wonderful, friendly, happy and prosperous valley and had everything that anyone could ever want. They had clean water, grew lots and lots of delicious fresh food and some of them spent their time playing an exotic game where they kicked balloons made of leather across lush green fields, just for fun. 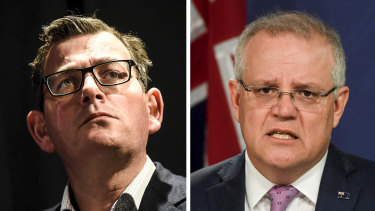 The duke and the prince: Daniel Andrews and Scott Morrison. Credit:Justin McManus

These happy people had but one bad habit. They had found magic beans which they cooked every morning into a delicious broth. The smell of the beans cooking wafting all over the kingdom. These magic beans – called coffee – kept the Victorians sedated.

One day, with almost no warning at all, a terrible invisible monster came and descended on the fertile valley. At first, no one even knew it was there. The happy-go-lucky Victorians had heard about the invisible monster from travellers returning from far off lands, but no one really thought it would ever lay siege to their valley. Why would it?

Duke Dan had been chosen by the Victorians to be their protector. He had promised that he would look after them and that they would be safe while he was in the palace. But the horrible invisible monster had other ideas. Very sadly, some of the people started to get sick from just being near the monster. Tragically, some got so sick that they died.

Until the monster arrived, Duke Dan had been jousting with his rival, Prince Scott, but they decided the only way to survive was to unite and fight the monster together. Prince Scott was always happy to get into a joust with monsters and thought he could just rob the monster of its strength. But Prince Scott and Duke Dan together found that even their cleverest wizards and witches could not work out how to trap the monster, and while they were distracted, the monster got bigger and bigger – and even bigger.

Away with you, stranger

In the nearby valleys, Duchess Annastacia and Duchess Gladys thought they could frighten away the monster if their drawbridges were pulled up, as the monster would not be able to cross the moats. So they forced all their people to rush home from the fields and sent any strangers away.

Duke Dan decided that if everyone barricaded their doors and all the people – even the men – wore a veil, the monster would be fooled and go away. But he did not know that the monster had already got inside the castle walls, and was hiding in places where no one knew. It was too late.

So Duke Dan spoke again to the wisest of his apothecaries and they came up with a plan. They decided to cast a spell to make everyone go to sleep for six weeks. That way the monster would be tricked and think there was no one left in the castle.

The spell was very powerful but not everyone went to sleep. The monster noticed that some people were only pretending and realised it was being tricked. But very slowly, the spell seemed to be working.

Meanwhile, even the best jesters in the land were unable to distract the people from the terrible beast, and they started to get angry. The Prince and the Duke started to blame each other, and the people saw them squabble even while the monster was still lurking. The people got very angry and there were whispers of revolt in the streets.

Prince Scott said that Duke Dan had betrayed his grand plan and that it was Dan's fault the monster did not go away. Dan was furious and said that Scott was to blame. While they argued, the people felt scared and just wanted them to fight the monster together.

News filtered through that in far away valleys, the monster was inside almost everyone's village. One exotic land that was many days sailing over the water had Baron Donald in charge and he tried to deal with the monster by just pretending that it wasn’t a monster at all. The monster thrived on that silliness and became super-powerful. Baron Donald had made a terrible mistake, but he could never admit that he was wrong. He blamed everyone else, and the people wondered what to do. His special secret friend Tsar Vladimir claimed he had found a poultice that made the monster vanish, but none of the other wizards and witches could see that it worked. They worried that instead, it would make people even more sick than the invisible monster did. No one knew what to do, and the monster thrived.

And did they all live happily ever after? Well, children, it is your bedtime now so you will all have to come back next time and we can all find out together.