Home » Lifestyle » One bettor lost $500,000 on a meaningless Eagles touchdown in the worst backdoor cover of the NFL season

One bettor lost $500,000 on a meaningless Eagles touchdown in the worst backdoor cover of the NFL season 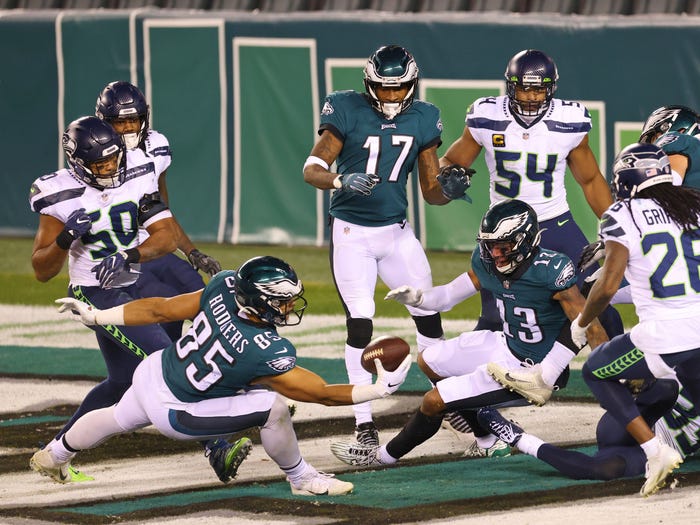 The Philadelphia Eagles scored what looked like a meaningless touchdown in the final seconds of their game against the Seattle Seahawks on Monday night, but for bettors, the score turned into the worst bad beat of the NFL season thus far.

With just seconds remaining on the clock, the Eagles trailed the Seahawks 23-9. While the Eagles had the ball and were moving down the field, the game was over for all intents and purposes.

But for bettors, the action was still of extreme importance. Heading into the game, the Seahawks were 6.5-point favorites over the Eagles, meaning Seattle bettors needed the Seahawks to win by seven points or more to cash their tickets. Meanwhile, the Eagles needed to win the game outright or lose by six points or less in order for Philadelphia backers to win their bets.

According to VSiN's Ben Fawkes, the bettors were on the Seahawks heading into the game, with one bettor having placed a $500,000 wager on Seattle to cover by a touchdown.

Unfortunately for them, the final sequence of the game would be a painful one.

With just 20 seconds left and the Eagles at the Seahawks 32-yard line, quarterback Carson Wentz threw up a prayer into the end zone, eventually connecting with tight end Richard Rodgers for a touchdown.

Had the Eagles elected to simply kick the extra point and make it a seven-point game, Seahawks bettors would have been fine, as Seattle would still be covering the 6.5-point spread. But as more teams are doing after scoring a touchdown when down 14, the Eagles instead opted to go for the two-point conversion, with running back Miles Sanders running basically untouched into the end zone.

The Eagles did not recover their onside kick attempt and went on to lose the game 23-17. Still, for Seahawks bettors, the damage was already done. On Twitter, fans and bettors lamented the wild turn of events.

The brutal turn of events was a terrible bad beat for bettors but a boon to sportsbooks.

"The swing was absolutely massive," said PointsBet spokesman Patrick Eichner, per Darren Rovell. "The Seahawks were our top liability the whole weekend. It turned a pretty solid Week 12 into a great one."