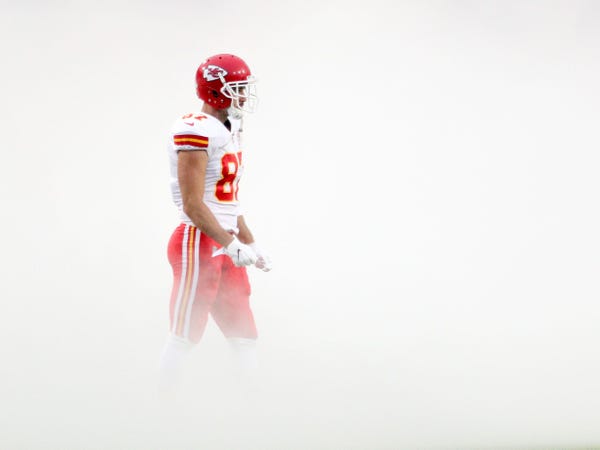 We're nearing the mid-point of the NFL season, and the chase for the playoffs is beginning to take shape.

The Chiefs and Titans remain powerhouses in the AFC, along with a compelling fight atop the AFC North between the Steelers and Ravens. In the NFC, the Seahawks reign supreme, but the Packers, Saints, and Buccaneers all have their own claims to the throne.

According to FiveThirtyEight, just 17 teams still have a 1% chance or greater or winning Super Bowl LV and lifting the Lombardi Trophy — that's up one team from last week, as the 49ers joined the contenders club this week after their win over the Rams on Sunday night.

Hilariously, none of the four NFC East teams currently made the ranking, even though one of them will be guaranteed a spot in the playoffs.

Take a look below at which team has the best chance of becoming (or in the Chiefs' case, remaining) champions in 2021.

One thing to know: The Cleveland Browns had a big opportunity for a statement game against the Steelers last weekend. Instead, they played like garbage and lost for the 17th straight time in Pittsburgh. There's enough talent on the Browns that they could make a run in the postseason, but they'll have to find their stride and stop putting up clunkers as they did on Sunday.

One thing to know: Bill Belichick and the Patriots defense didn't allow the Broncos to score a single touchdown against them on Sunday. However, it didn't matter as Broncos kicker Brandon McManus kicked six field goals through the uprights to seal an 18-12 win over New England.

One thing to know: Derek Carr and the Raiders already proved they could keep up with the best the NFL has to offer, becoming the first team to beat the Chiefs in nearly a year two weeks ago. Another win over the Buccaneers this week would go a long way in proving that they're Super Bowl contenders come playoff time.

One thing to know: Kyler Murray and Kliff Kingsbury's high-flying offense will be up against a Seahawks team that has scored a league-leading 34 points per game. This might be a good game to bet the over on.

One thing to know: The Colts trailed the lowly Cincinnati Bengals 21-0 to start their game on Sunday. While Indianapolis found a way to come back and secure the win, it's troubling to see a team that should be contending in the playoffs digging such a huge hole for themselves.

One thing to know: The 49ers shrugged off a slew of injuries to beat the Rams on Sunday night and should continue to get better as the team slowly works its way back to full health.

One thing to know: Bills quarterback Josh Allen had looked like a potential MVP candidate before a rather dreadful against the Chiefs this past week. Thankfully, Allen will have a great chance to rebound with a big game against the Jets this weekend.

One thing to know: Despite an embarrassment of riches on offense, the Rams sputtered their way to just 16 points against the 49ers last week. They'll face a tough test again this week against a Chicago defense that is one of just seven NFL teams, allowing less than 20 points per game.

One thing to know: The Chicago Bears are in a unique position in that despite their 5-1 record, no one seems to think they have a real shot at contending this year. With their next three games against the Rams, Saints, and Titans, the Bears have a great opportunity to prove they're for real.

One thing to know: After taking a week off, the Saints are now looking up at the Buccaneers in the NFC South standings. The return of superstar wide receiver Michael Thomas should go a long way in adding some fire to the offense over the next few weeks.

One thing to know: The Packers offense struggled to contain the pressure of the Buccaneers pass rushers on Sunday. Aaron Rodgers and his receivers might need to start working a bit faster to keep the chains moving.

One thing to know: After opening the game in a 10-0 hole, Tom Brady and the Tampa Bay Buccaneers rattled off 38 straight points against the Packers en route to an emphatic win. The victory was especially sweet for tight end Rob Gronkowski, who caught five passes for 78 yards and his first touchdown as a Buccaneer.

One thing to know: Ben Roethlisberger has played pretty well for a 38-year-old quarterback coming off a season that was lost to injury. Roethlisberger is in the top-10 in the NFL in completion percentage and touchdowns and has thrown just one interception through five games.

One thing to know: The Titans were moments away from their first loss of the season, but thanks to an intentional penalty taken by head coach Mike Vrabel and some stellar acting from quarterback Ryan Tannehill, Tennessee stole an overtime win from the Texans on Sunday. Derrick Henry, with 264 total yards and two touchdowns, helped quite a bit too.

One thing to know: Baltimore's record speaks for itself, but the Ravens haven't looked quite as dominant as they did last season. They'll have this week to put towards some extra preparation for their Week 8 matchup against the Pittsburgh Steelers, which could prove decisive in the AFC North this season.

One thing to know: The Seahawks are undefeated and looking like a powerhouse heading into the mid-point of the season, but the next few weeks present a huge test for Seattle, with games against the Cardinals, 49ers, Bills, and Rams.

Chances are in a few weeks, he'll be the fastest to throw for 100.