Home » Lifestyle » Our shoes are a window on our soles!

Our shoes are a window on our soles!

Our shoes are a window on our soles! What drove these women to spend up to £25k on their staggering collections of footwear?

While some might dip into a good book at the end of the day, Katie Porter unwinds in bed with an altogether more fashionable form of ‘me’ time.

On a quiet evening, the 51-year-old events manager is to be found on her bed, marvelling at her foot in one of her 500 pairs of shoes.

‘When I go to other people’s houses they have their books on display on shelves. But I have my shoes because it says far more about my personality. I think they’re fascinating.

‘I spend hours looking at my shoes, sometimes just lying back on my bed and admiring my ankle while I try them on. It’s good to have something that keeps you happy, and for me it’s definitely enjoying my collection.’

A few years ago, such behaviour might have led some to question whether Katie had some form of obsessive compulsive disorder. 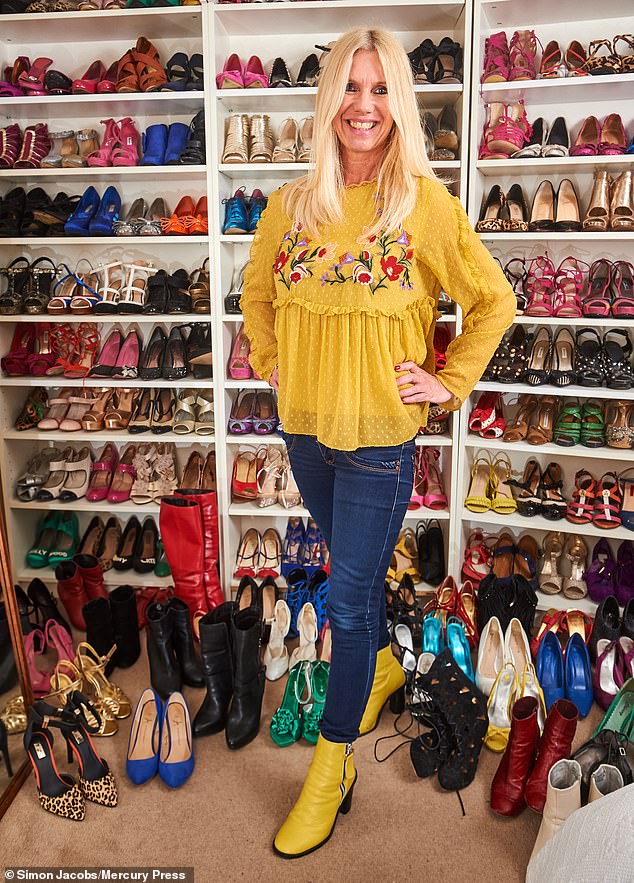 Yet these days, her £25,000 collection, which includes designs by Vivienne Westwood and Alexander McQueen, and which are housed on shelves in a giant walk-in cupboard at her Edinburgh home, are more likely to be seen as a modern woman’s Shangri-La.

While most of us don’t reach Katie’s giddy heights of a shoe collection, more than a quarter of women will admit to owning more than 50 pairs, according to research.

As to the cost, most think nothing of spending more than £100 on a single pair of shoes.

Yet despite the expense, four in ten women confess there are at least five pairs in their collection which they haven’t worn more than once.

Moreover, our relationship with shoes is far from healthy: more than half of women are happy to hobble around in agony as long as a pair of shoes looks good, while 86 per cent have suffered an injury while wearing them.

So what is it about shoes — and in particular stilettos — which make women go, quite literally, weak at the knees?

Our fascination with footwear goes way beyond aesthetics. It’s our gateway to instant gratification with the added bonus that the joy carries on.

According to branding expert Martin Lindstrom, author of Buyology: Truth And Lies About Why We Buy, women feel more justified in buying shoes than any other item of clothing. 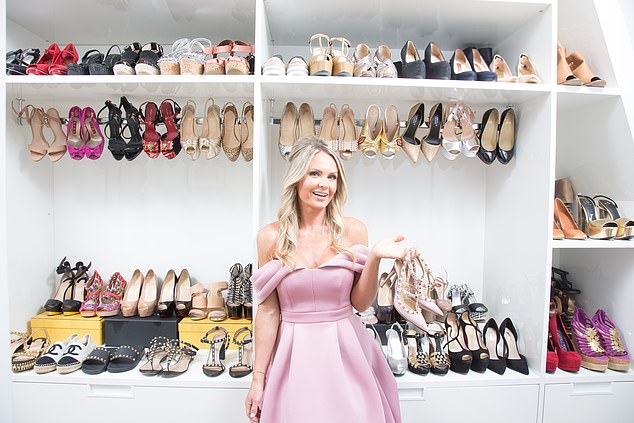 Annie Cooper, 33, displays her collection of over 100 pairs of shoes on floor-to-ceiling shelves in the dressing area of her North London home

‘When shopping, dopamine — the neurotransmitter that helps control the brain’s reward and pleasure centres — is released until the moment you swipe your debit card,’ he says. ‘Usually, with other purchases, the high then flatlines and guilt starts creeping in. Except, that is, when the item you’re purchasing is a pair of shoes.

‘Shoppers rationalise shoes as a practical buy — something they can wear multiple times a week — so they hold on to that pleasurable feeling longer.’

Shoe expert Katie Owen, founder of wide-fit shoe company Sargasso & Grey, points out that in an age where we no longer wear hats and gloves, shoes have become the key way for women to show off their individual styles.

‘Even handbags don’t have the role they once had because nowadays we carry so much around in them. There is no other item in our wardrobes which, just by slipping them on, makes you instantly look taller and more glamorous.

When Dr Daisy Mae slides her feet into one of her collection of more than 100 pairs, the rush of pleasure of the day they ‘first met’ comes back to her all over again.

‘As a doctor for 30 years, I’ve spent a lot of time on my feet, walking up and down to fetch patients to clinics, so I have to wear flat, comfortable work shoes. But when I put my sparkly shoes on, I go from a jobbing professional to carefree Cinderella at the ball.’

For Daisy, 58, a sexual health specialist, her shoes are also a constant in a changing world. Like many women, Daisy, who lives in Eastleigh, Hampshire, can tell the story of her life through her footwear.

She still remembers the excitement of getting her first pair of red shoes at the age of ten. And when Daisy’s 27-year marriage ended seven years ago, her first present to herself was to buy ten new pairs, which she felt would represent ‘the new me’.

‘I’d been so miserable in my marriage that by the end I was depressed and saw the world in black and white.

‘When I started my life again, I started to notice colours again. When I went into a shoe shop, I saw that the shoes were all the colours of the rainbow, like the flavours on display in an ice- cream shop.’

Despite her collection being worth around £10,000, Daisy says it is more about volume than price. She owns more than 100 pairs, yet the most she’s ever spent on her heels is £120. Her post-divorce ‘splurge’ set her back a ‘modest’ £500.

‘I’m at an age now when I was expecting to be wearing slippers, but the reality is that I’m wearing sparkly shoes because I go ballroom dancing three times a week.

‘There’s a certain chemistry to putting on a pair of shoes. When I get them out of the box, I love to hold them and admire the seams, the buckles and sparkly bits.

‘Buying them is such a pleasure, too. While I’ve gone up and down in dress sizes over my lifetime, from a 12 to a 16, my shoe size always stays the same. 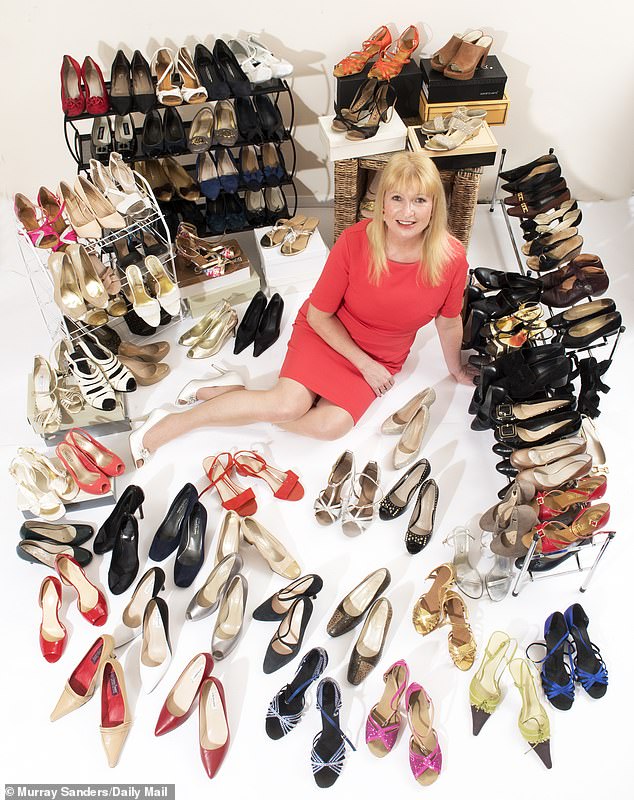 Pictured: Dr Daisy Mae with her impressive collection of shoes at her home in Hampshire

‘I find it impossible to buy just one pair. A few months ago, I bought five pairs of dancing shoes — costing around £50 each — in one go. You think: ‘I’ll have that colour and that one.’ Then after you get a few plain ones, you think, ‘I should have few glittery ones, too.’ ‘

There is another reason why women find shoes irresistible.

Professor Suzanne Ferriss, editor of the book, Footnotes: On Shoes, explains: ‘Shoes are a collector’s item, whether women perceive them that way or not.’

That’s just how Annie Cooper, 33, looks at her collection of over 100 pairs, which she displays on floor-to-ceiling shelves in the dressing area of her North London home.

They include Valentino sandals, Christian Louboutin stilettos, Fendi platforms and 40 pairs of trainers. The entire collection is worth more than £25,000.

Annie, an actress and mother-of-three, says: ‘I like to see my shoes displayed on my shelves, ready and waiting, like ornaments. And when I put them on I find them instantly mood-altering.

‘I walk differently, I hold my body differently and feel more confident. You feel like you can take on the world in the right pair of shoes. As Coco Chanel said: ‘A woman with a good pair of shoes is never ugly.’ I think that’s true.’

No matter how much they cost, Annie agrees there is less guilt attached to buying shoes, although she says it helps that her husband Chris, a property developer, loves footwear as much as she does.

‘I think buying shoes is different from other clothes. It’s a present to yourself that instantly makes you feel a million dollars. There’s the experience of unwrapping them from the box, taking off the tissue paper, smelling them, and feeling the crisp new leather.

‘A new designer pair is something you can keep for ever and I justify buying them because I’m hoping my daughters will one day enjoy my collection as much as I do.’

In her mind, Annie’s pre- lockdown weekly shopping trips to Selfridges and Bond Street were like ‘the thrill of the chase’— and she says she is never tempted to kick them off on a night out.

‘No matter how much pain I’m in, they don’t come off until I get home. If I took them off, it would make me feel half-dressed. The pain is never anything another glass of a champagne won’t help.’

Yet Katie Owen points out that many women have ‘a strange relationship’ with their top-end designer high heels, which sometimes borders on the unhealthy.

‘When it comes to footwear, women will compromise comfort for style and suffer pain and lasting damage to their feet to be seen in the ‘right pair’ which they wouldn’t do with anything else in their wardrobe.’

Yet, stilettos definitely have some advantages. Researchers at the Université de Bretagne-Sud in France found that women who dropped their gloves or asked for help completing a survey in the street were more likely get help from passing men if they wore high heels instead of flat shoes.

This may be down to the fact that high heels force women to adopt a primal mating pose called lordosis, according to anthropologists, which makes their bottoms sick out up to 25 per cent more.

Allan Pease, author of Why Men Don’t Have A Clue And Women Always Need More Shoes says women’s love of footwear is so deeply embedded it also appears to cross cultures.

‘On average female Inuit own four pairs of snowshoes to every pair that men own.’

The start of the modern love affair with shoes came when the high heel was born in around the 14th century when Venetian prostitutes started adding cork platforms to their shoes to be head and shoulders above the competition and attract more customers.

Yet it was the arrival of the American TV series Sex And The City — centred around fashionable, stiletto-lover Carrie Bradshaw —more than two decades ago which turned footwear into a cultural fetish, according to Rebecca Shawcross, author of Shoes: An Illustrated History.

‘Before then, there had always been a fascination with shoes but this series gave it the stamp of approval.’

And, says psychologist Diana Parkinson, new shoes of any kind are just as much a sign of status today as they were for women hundreds of years ago.

‘If you’re spending a reasonable amount, there will be a sales assistant bringing loads of boxes and kneeling at your feet. Even though we don’t have maids any more, it evokes the feeling of being waited on hand and foot.’

Beyond that, the most common reason shoes give us pleasure is because they are the items of clothing we can most easily admire ourselves wearing, just as Katie Porter does in her bedroom.

Diana says: ‘To see the rest of your outfit, you have to look in the mirror. If you’re wearing a good pair of shoes, you can get a kick just by looking down.

‘They are like works of art at the ends of our feet.’