'Outlander' Saved Its Biggest Twists for the Season 5 Finale

Warning: This post contains spoilers for the Outlander season 5 finale.

Before Sophie Skelton can walk me through the emotional twists in the Outlander season 5 finale, she wants to apologize. "I’m sorry for the finale and I hope you’re okay," Skelton, who plays Brianna Fraser MacKenzie, tells me over the phone. "It’s a gruesome one."

It's not Skelton's fault that Outlander's season 5 finale includes some of the series' most horrific moments to date. But viewers will definitely agree with her description. By the episode's closing shot, "I think everyone in the season has either taken a life or saved a life," Lauren Lyle, who plays Marsali, says. "It’s been really high stakes the whole time."

Before the finale, episode 11 left us with two cliffhangers that fractured the Fraser clan. Bree, Roger, and Jemmy attempt to time travel back to the relative safety of the 1960s. At Fraser's Ridge, Lionel Brown's militia abducts Claire and attacks Marsali. The reason? They discovered Claire had dispensed medical advice to women under the pseudonym Dr. Rawlings—a breach of the time's gender norms and a personal affront to Lionel, who assumes Claire's advice interfered with his marriage.

When the season finale begins, Claire tries and fails to escape her kidnappers. Claire is then tied up, beaten, and raped as Lionel's prisoner. There's no getting around it: It's horrific to see Claire abused. She's dealt another setback when one of Lionel's gang members reveals that he's also a time traveler, but he refuses to help Claire escape.

Suddenly, the show incorporates a twist that isn't found in A Breath of Snow and Ashes, the sixth Outlander book that Claire's capture is pulled from. As Claire is held prisoner, she imagines she and Jamie are living in the 1960s. Outlander has woven Claire's past-future into other episodes, but never like this. In a mental escape that cuts between scenes of Claire's torture, Claire and Jamie hold a Thanksgiving dinner for Young Ian, Marsali, Fergus, Jocasta, and Murtagh—all dressed as 1960s versions of themselves. 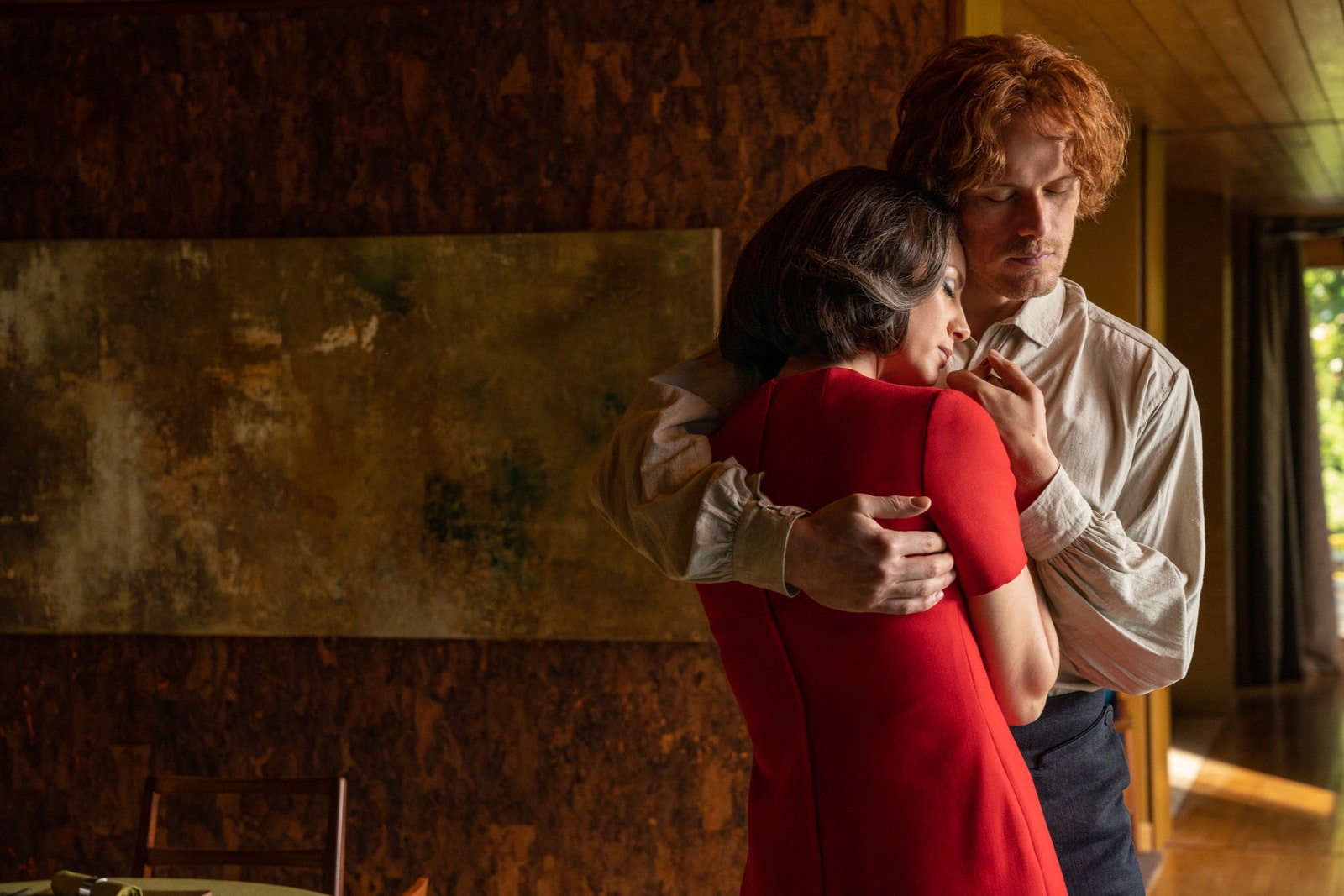 After she’s captured by Lionel Brown’s militia, Claire creates a mental escape by picturing the Fraser family at a Thanksgiving dinner in the 1960s.

"We all knew how sort of steeped in horror it all was," Lyle says of the 1960s sequence. "I don’t think it’s something I’ve ever seen happen in a show, especially a period drama."

The flashes remind viewers of how different life could be for the Frasers if they'd lived in the right place at the right time. Claire wouldn't be kidnapped for daring to practice medicine; Murtagh wouldn't have died in battle; Marsali wouldn't carry a family on her shoulders. "In the time that [Marsali] lives in, she has butcher animals and have so many children by the age of 20-odd, and keep a whole Ridge afloat at times," Lyle explains. "Yet she’s very young and actually, in [the 1960s], wouldn’t be ready or prepared or expected to do any of that." 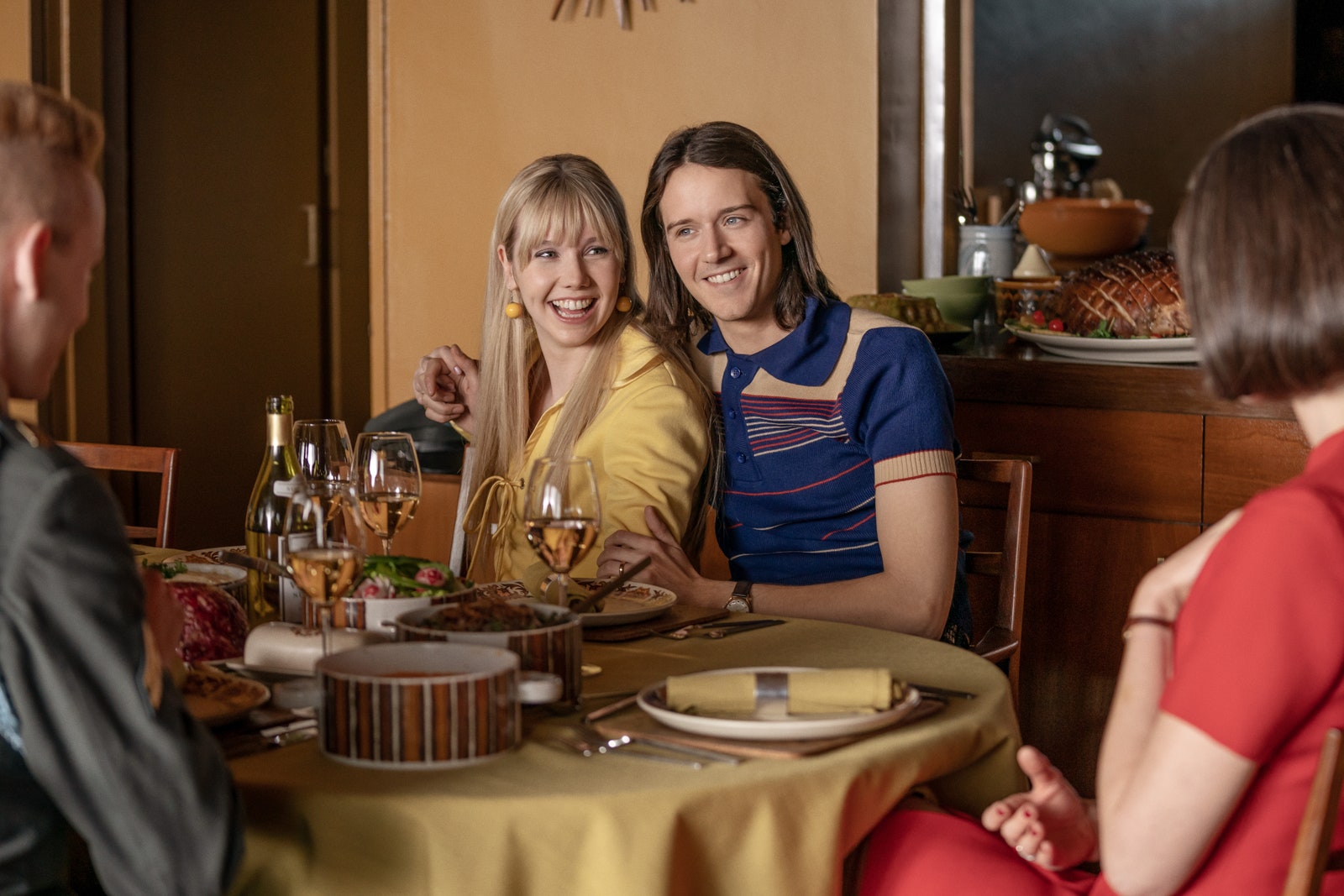 "To see Marsali in this dreamscape with a young family and Fergus felt really cool to do for contrast," Lauren Lyle says of episode 12’s ’60s interlude. "But that was a once in a lifetime experience with Outlander because, as far as I’m aware, Fergus and Marsali can’t travel in time."

Claire's capture and '60s coping mechanism only take us 20 minutes into the finale. Hundreds of miles away, Brianna, Roger, and Jemmy have been spit out on the other side of the standing stones to…well, not when they expected. Somehow, they're still in 1772.

Brianna's attempted journey is a major deviation from the books, Skelton says. "It was an interesting twist that they try and go back this season, because in the books they have a [second] child and they go back to give their child [heart] surgery."

"I think she was just doing it for Roger and Jemmy," she explains. "Roger doesn’t fit in in the past as well as Brianna does, and it’s been a dangerous place for Jemmy." When the sight of Young Ian confirms that Brianna and Roger haven't traveled at all, Skelton says Brianna has mixed feelings: "There’s a slight fear that she’s kind of failed them because she was thinking of home, and home to her is her parents."

Brianna's fear turns into relief when Roger says he was also thinking of home when they went through the stones. Staying in 1772 "solidified for them that that is where they belong. Everything really starts to come together and settle, and they start to feel that it’s their home away from home, if you like. Their home is their family," Skelton says. 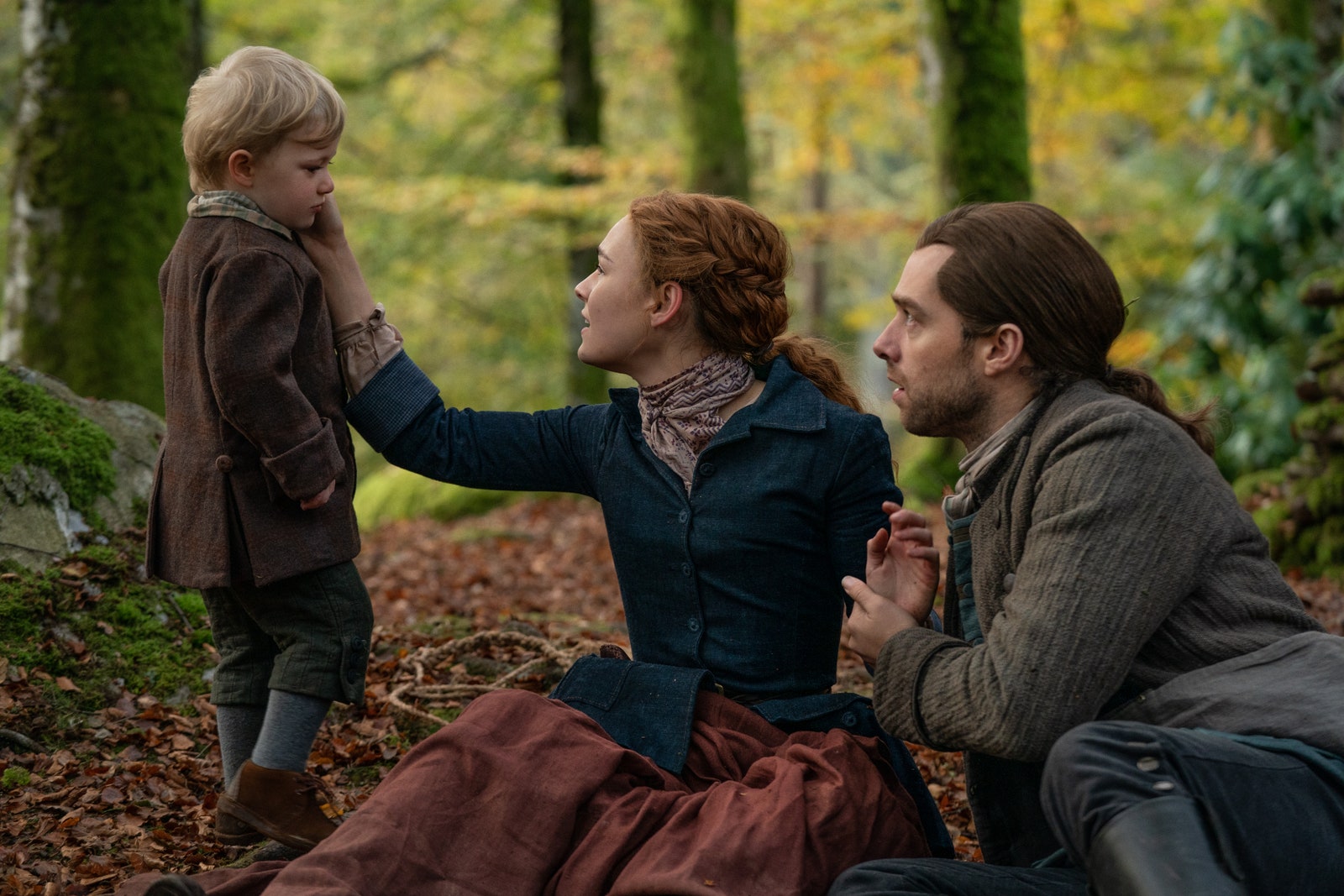 Brianna, Roger, and Jemmy don’t make it back to 20th century in Outlander‘s season 5 finale. Bree’s immediate reaction: “There’s a slight fear that she’s kind of failed them because she was thinking of home, and home to her is her parents,” Sophie Skelton says.

In a matter of moments, Brianna's gone from believing she'll never see her parents again to expecting a beautiful reunion back at Fraser's Ridge. That vision comes crumbling down when Brianna and Roger see that Jamie has lit the Ridge's wooden cross—a sign of war—and learn that Claire's been abducted.

Jamie, Roger, and the men of the Ridge manage to extract Claire from her captors in a bloody standoff. All die except for Lionel, who's brought back to the Ridge for questioning (and eventual punishment). There, Brianna and Claire share a quiet reunion that would have been unthinkable an episode before.

"In that moment when she sees Claire, she knows what’s happened," Skelton says. "Brianna’s just crumbling inside because she knows exactly what Claire’s going through. She hates that her mother has now been privy to such an awful, awful scenario as well."

Processing her own trauma—Brianna was raped by Stephen Bonnet in season 4—gives Brianna the perspective to help Claire heal. In this case, it's leaving the door open for Claire to confide in Brianna, but never forcing her to talk about her trauma. Skelton notes that Brianna repeats to Claire a variation of the line Lizzy said to Brianna after her assault: "If you need a hand to hold or an ear to listen, it’s here." 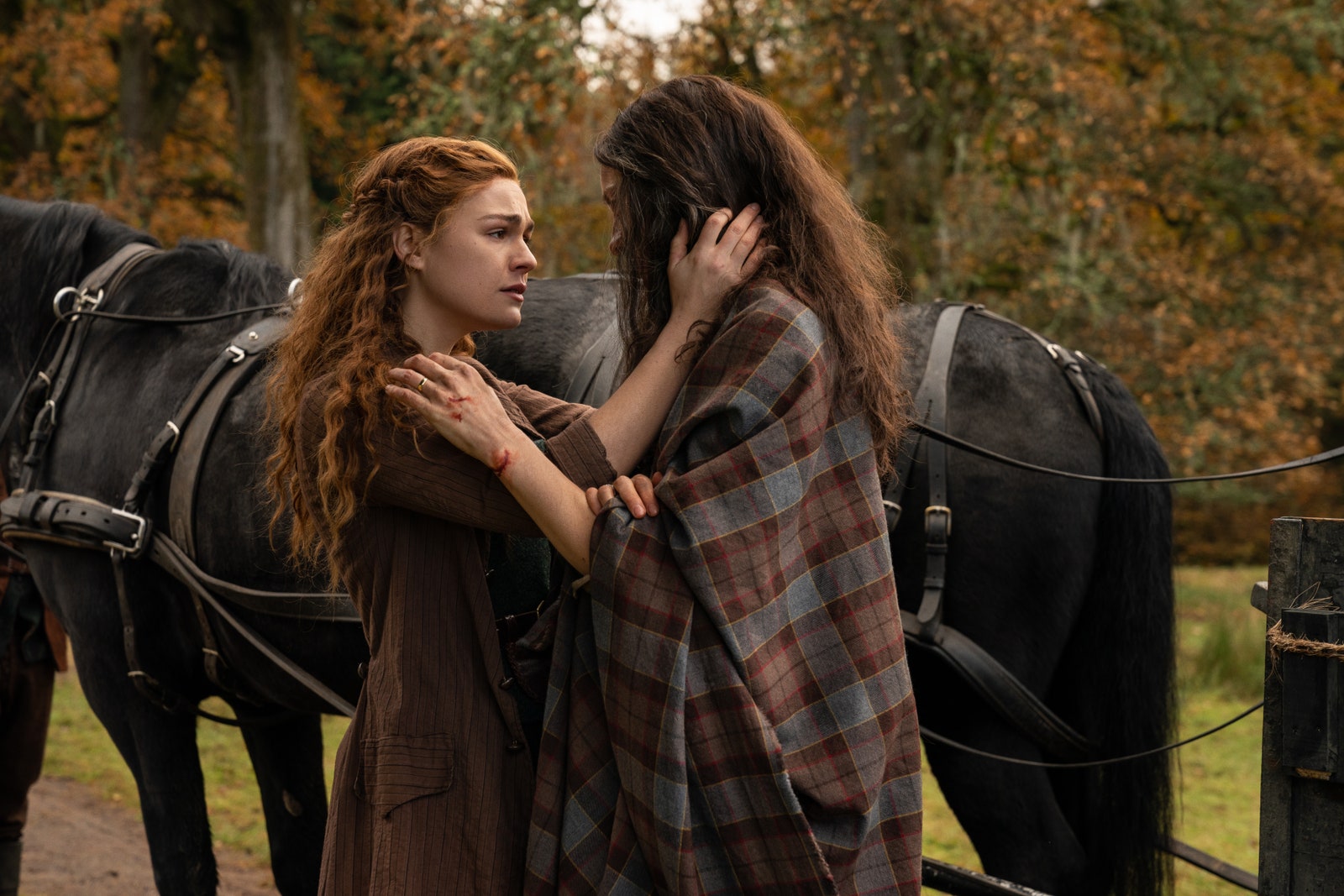 Brianna and Claire’s emotional reunion at Fraser’s Ridge culminates seasons of growth, Skelton says. “Now I feel like they really understand each other, Claire and Bree, and it’s almost like they can communicate without any words."

Just as Brianna and Claire's relationship deepens due to the finale's heartbreaking course of events, so does Marsali and Claire's. Since they met in season 3, Claire and Marsali have gone from pseudo-adversaries to almost as close as mother and daughter. Marsali even became Claire's medical apprentice in season 5.

Her new medical knowledge comes to the fore at the finale's close. Lionel Brown, injured and now the captive, spits graphic threats at Claire and Marsali while lying on the surgery table. Claire seems to consider killing her abuser. But she's bound to her oath to "do no harm" and can't bring herself to murder him.

So Marsali, in a stunning twist, injects Lionel with a toxic substance and kills him after Claire leaves the room. Of Marsali's split-second decision, Lyle says, "She isn’t going to stand around and wait for someone else to come along and help her. I think it’s obvious that it’s her responsibility in that moment [to kill him] and she knows that she can."

Marsali killing Lionel is no different than Jamie, Fergus, and Ian killing the rest of the militia, Lyle adds. Marsali's doing what she must to protect her family from a proven abuser; it's an act of resilience. "You saw the strength of who she is, and it’s not just, ‘I’m killing someone out of revenge,’" says Lyle. "It’s meaningful to protect everyone else and for a much bigger picture." 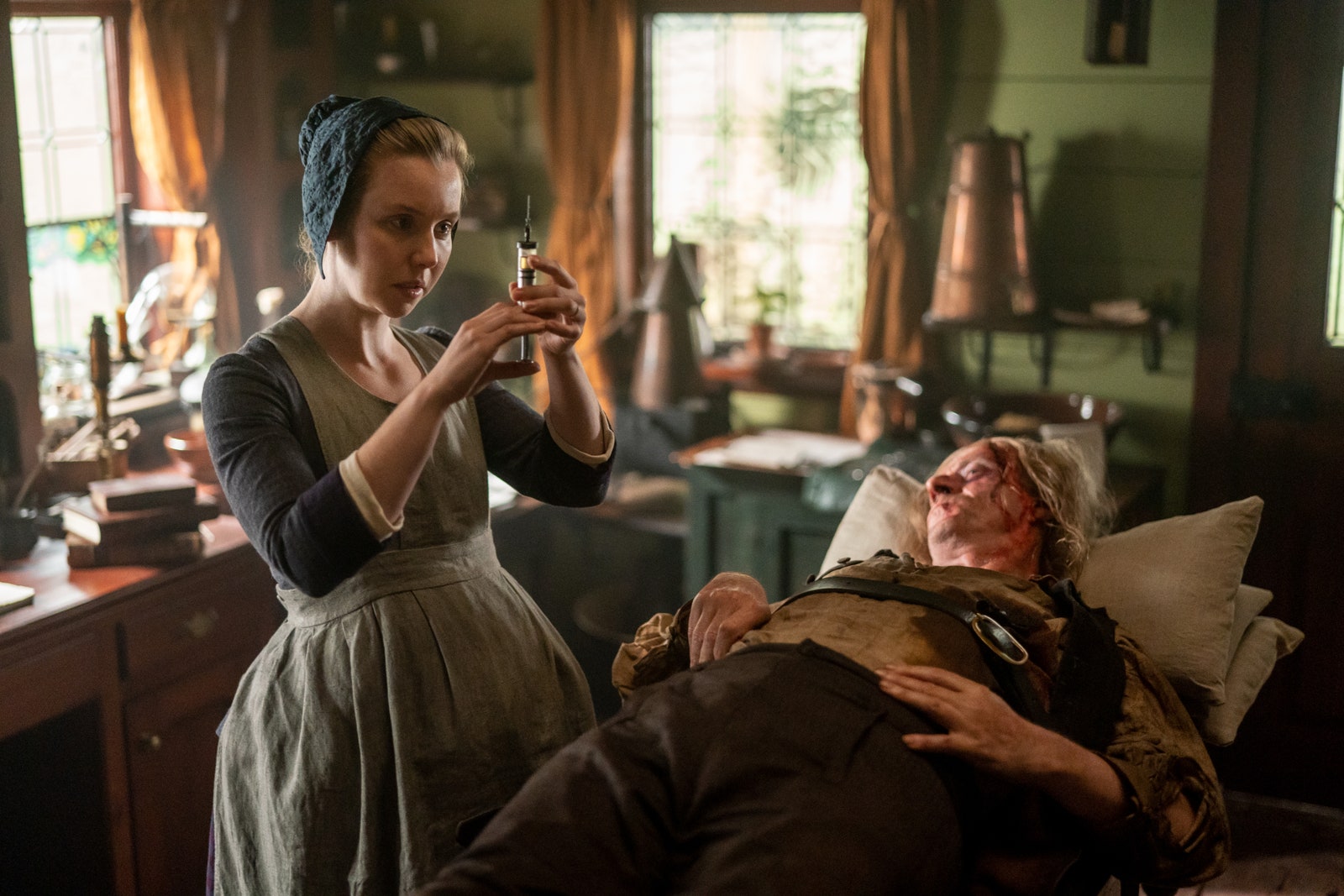 Marsali’s decision to kill Lionel Brown via injection is a matter of survival, Lyle says. “She isn’t going to stand around and wait for someone else to come along and help her. She knows that she has to do it herself, and the responsibility is on her.”

Claire's rescue and the deaths that followed will have consequences in the story ahead. When Jamie returns Lionel's body to Brownsville, Lionel's brother threatens that he'll "do what he must" to avenge Lionel.

We'll have to wait through an extended Droughtlander to find out what he means: Production on season 6 is delayed due to the coronavirus pandemic. Lyle and Skelton both say the cast hasn't seen scripts yet, so it's unclear how the Frasers' next onscreen chapter will compare to the books. On Twitter, showrunner Matt B. Roberts noted that the writers are still working on the next season.

For now, Lyle hints that the relationships we know and love will face new challenges. "I know quite a lot about what’s going to happen with Fergus and Marsali in terms of their relationship, and all I can say is that it’s entirely different to what we’ve seen before," Lyle says. 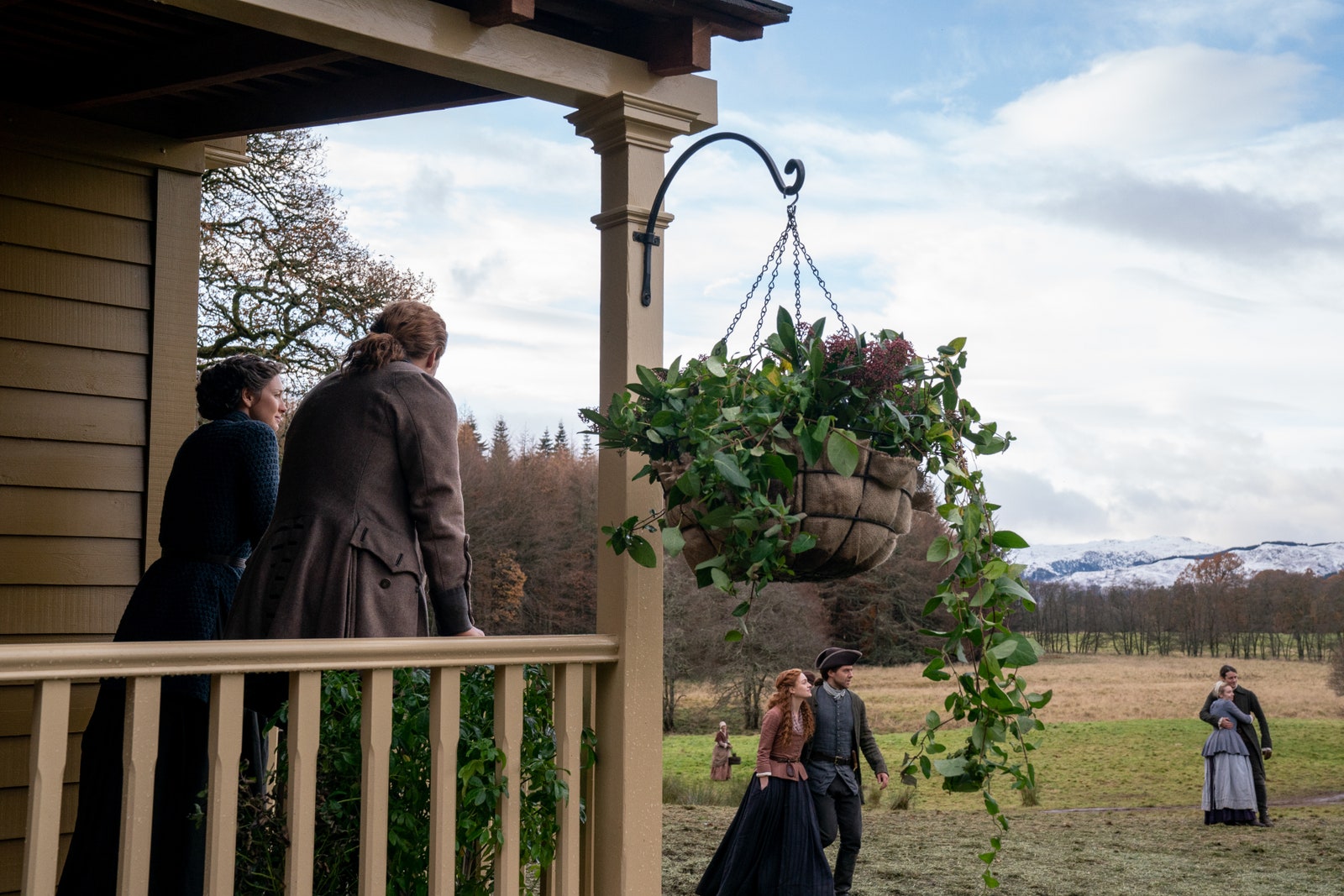 At the Outlander season 5 finale’s conclusion, all’s quiet at Fraser’s Ridge. Don’t expect that to last in season 6.

As for Claire and Brianna, they've dealt with immense trauma in season 5. Memories of those experiences won't dissolve with a new storyline. "I want to make sure that we haven’t tied trauma up in too much of a bow and put it away," says Skelton. "That's something that is never just the past for people, and I want to make sure that it’s still in Brianna [and] that we still see it."

Skelton also reminds us there's a storm brewing that will affect every single character. "The American Revolution’s on the way, and I’m sure the Frasers are not out of the woods because they never are," she says. Whatever's in store, we know the women of Fraser's Ridge will get through it together.

Halie LeSavage is a retail reporter and occasional Outlander correspondent. Follow her @halie_lesavage.